Tom Brady, as good as ever, selected as PFF NFL Offensive Player of the Year

The selection of Offensive Player of the Year is often given to the best non-quarterback, in part due to quarterbacks dominating the MVP voting, but our Offensive Player of the Year will go to the highest-rated offensive player regardless of position. This year, it’s Tom Brady of the New England Patriots, as his 94.7 regular-season grade topped all offensive players.

Even at the age of 40, Brady continues to be the class of the league, and he led the quarterback grading for the second straight year. 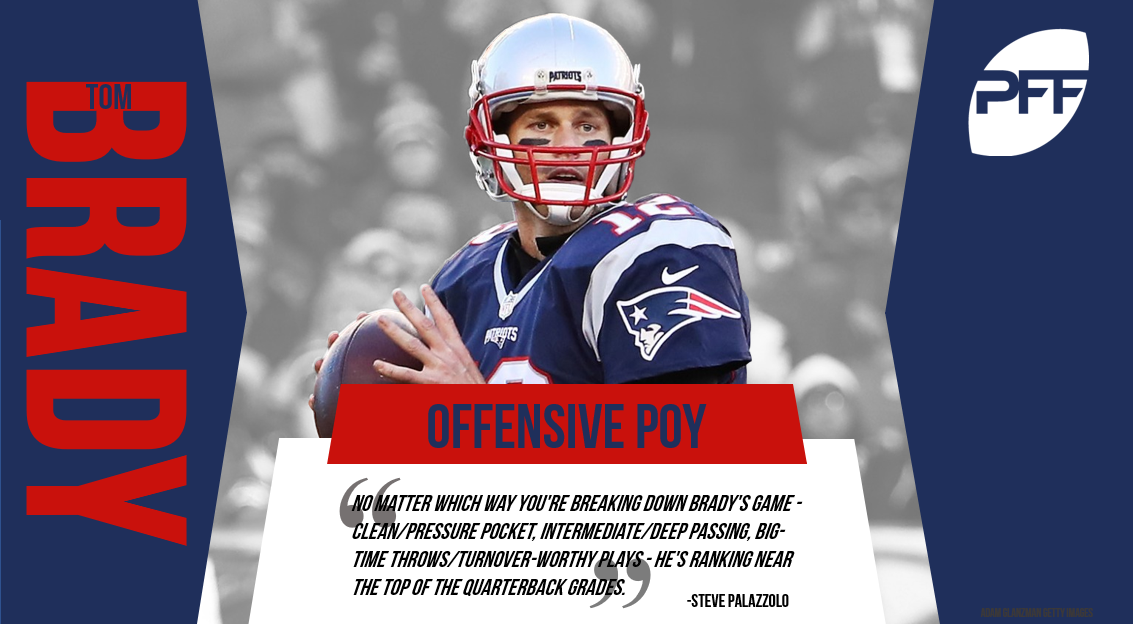 The New England offense has generally been defined by short and intermediate passing and yards after the catch from the receivers, but the 2017 version had a different look. Perhaps due to losing shifty receiver Julian Edelman for the season, Brady threw the ball down the field more than ever, finishing sixth in adjusted completion percentage on deep passes (46.3 percent) and finishing with the No. 2 PFF grade on those throws. He maintained his strong play on intermediate throws as well, finishing fifth in PFF grading. 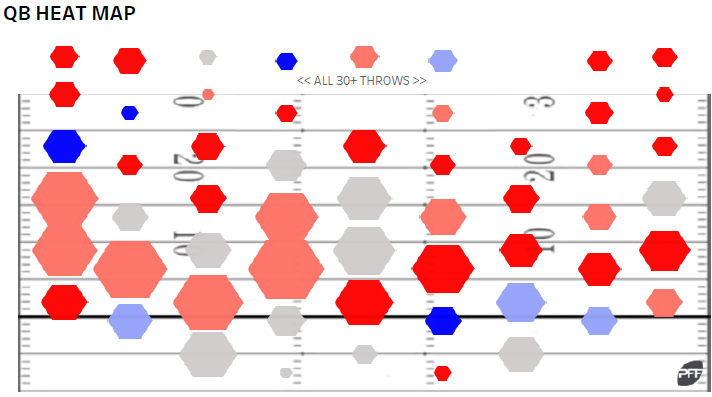 Brady ranked third in the league in big-time throw percentage at 6.3, as he threw with great ball location down the field and at the intermediate level. He’s one of the best quarterbacks in history at taking care of the football and even with a more attacking approach, he still managed to rank fifth in the league at avoiding turnover-worthy plays. Ranking high in big-time throws and turnover-worthy throws is a great starting point for any quarterback, then add to it that Brady also ranked second in the league in overall positively graded throws, and his value was easy to see on a weekly basis.

[Editor's Note: All statistics on quarterbacks, including these mentioned on Tom Brady, can be found in the first ever PFF QB Annual, released earlier this month.]

Even down the stretch, as Brady’s December statistics took a dip, he was still playing good football, outside of a poor game against the Miami Dolphins on Monday Night Football. Brady’s game in Week 15 against the Pittsburgh Steelers may look like a pedestrian effort on the surface (22-for-35 for 298 yards, 1 TD, 1 INT), but the reality is that it was one of the best displays of big-time throws we saw all season. From perfectly placed touch throws to #InStride seam routes, Brady was on point throwing down the field. However, some of his best passes didn’t show up in the stat sheet due to penalties or drops. Ultimately, Brady led the comeback against the Steelers, securing the No. 1 seed in the AFC once again for the Patriots.

Speaking of comebacks, Brady’s Week 3 game against the Houston Texans was another thing of beauty. Finishing with five touchdowns and 378 passing yards is one thing, but once again, Brady had his back against the wall in crunch time and he came through. Facing a five-point deficit with 2:24 to go, Brady marched the Patriots down the field, culminating with one of the best throws of the season as he hit WR Brandin Cooks in the front corner of the end zone, making the throw while getting hit during his motion. 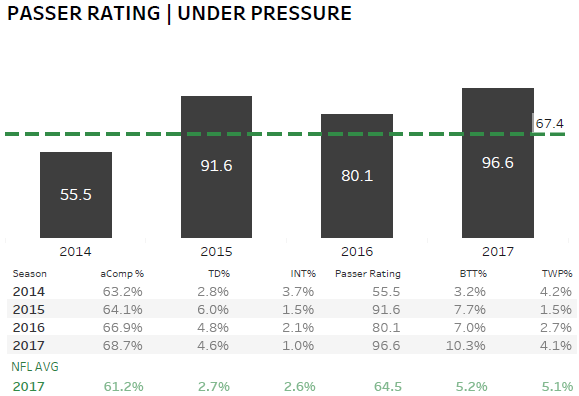 This pass highlighted one key stat for Brady’s season, his passer rating under pressure, which came in at 96.6, by far the best in the league. The 25-yard score with 34 seconds remaining was just another chapter in Brady’s story, one that features more clutch moments than any signal-caller in history.

From those individual moments to his down-to-down consistency, Brady continues to play quarterback at an extremely high level. His decision-making and accuracy remain among the best in the league, but it’s really his ability to add a few more big-time throws to his arsenal that has made him nearly unstoppable over the last few years. He also made a conscious effort to extend plays and make more plays outside of structure in recent years, something that shows up in his No. 2 passer rating (102.0) on plays lasting at least 2.6 seconds.

No matter which way you’re breaking down Brady’s game – clean/pressure pocket, intermediate/deep passing, big-time throws/turnover-worthy plays – he’s ranking near the top of the quarterback grades. It all added up to the top quarterback grade in the league and the best grade by any offensive player, as Tom Brady takes home PFF’s Offensive Player of the Year honors.