Los Angeles Rams cornerback Nickell Robey-Coleman has seen his name in the news frequently over the past two weeks. The sixth-year man will forever be associated with running over New Orleans Saints wide receiver Tommylee Lewis for a sure-fire pass interference that would have iced the NFC Championship in the Saints' favor — but instead a penalty wasn’t called, eventually leading to the Rams moving on.

But Robey-Coleman’s 2018 season has been much more than a missed penalty call. Only six other cornerbacks played more snaps from the slot than Robey-Coleman (358), and Sunday’s bout against the New England Patriots will put his slot skills to the extreme test.

Following a 2017 campaign that saw him notch the seventh-lowest yards per reception allowed from the slot, Robey-Coleman has been even better this year. 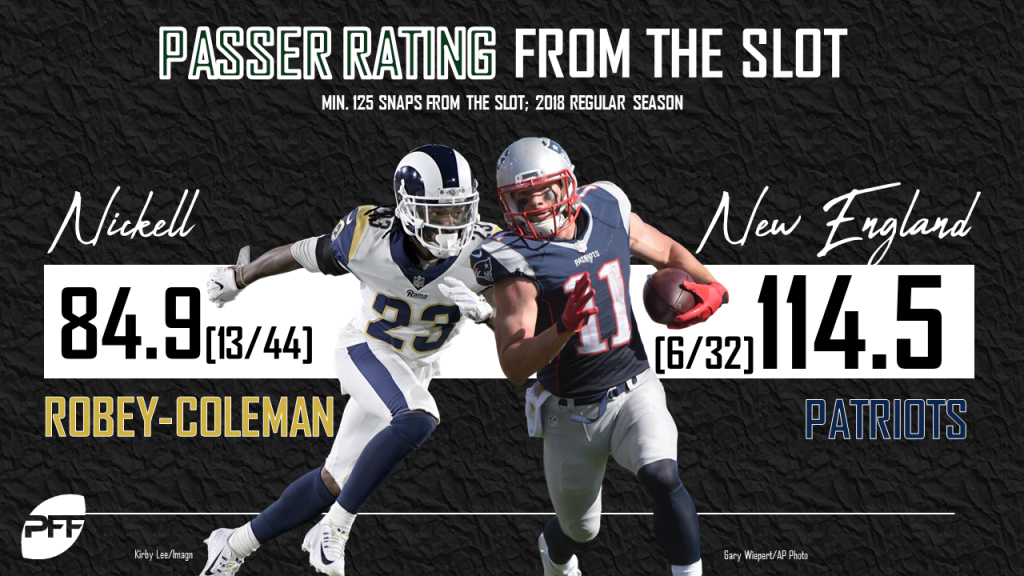 He surrendered just 0.71 yards per cover snap from the slot in the 2018 regular season, the third-best mark among qualifying cornerbacks. He also showed improvement in snaps per reception allowed and catch rate allowed.

Two-thirds of Edelman’s snaps came from the slot in the 2018 regular season, and he often left his matchups in the dust.

Against Tennessee Titans cornerback Logan Ryan, Edelman posted caught 3-of-4 targets for 41 yards. Ryan finished the season sixth in yards per snap allowed from the slot (.84) — his second straight year finishing top 10 in the category. Yet, he was unable to lock Edelman down.

It was a similar story against the Buffalo Bills, who allowed the third-fewest yards from the slot in the 2018 regular season. Edelman alone torched them in two games for 10 catches on 11 targets for 108 yards and a touchdown from the slot.

And if the Robey-Coleman and the Rams didn’t already have enough to worry about, Hogan has also been a reliable option when lined up in the slot.

Hogan earned a 140.4 passer rating when targeted from the inside during the 2018 regular season, which ranked third among all receivers.

Despite Robey-Coleman’s continued success in the slot, the Rams as a unit have struggled. The team allowed 14 touchdowns to just four interceptions from there in the regular season. That amounted to a 119.0 passer rating when targeted (29th).

New England’s offense generated a 114.5 passer rating from the slot, sixth-best in the regular season.

That should worry the Rams, as Robey-Coleman was the team’s only corner to see significant work from the slot. Marcus Peters and Troy Hill both faced 13 targets from inside during the regular season, and neither found much success — they each allowed passer ratings above 120.0.

A dual threat from the slot will likely force a safety or linebacker on Hogan — which was often the case in the regular season with Edelman drawing most of the attention — which would obviously be a mismatch.

So while the battle in the trenches among the NFL’s most daunting defensive line and the Patriots sturdy offensive line is enticing; And while excitement is building around whether third-year quarterback Jared Goff can outshine future Hall-of-Famer Tom Brady — potentially the most crucial battle lies in the Rams’ ability to control the middle of the field from the slot.