Did the Seahawks' refusal to use their best player cost them in Dallas?

This offseason, new Seattle Seahawks offensive coordinator Brian Schottenheimer said that the key to his offensive philosophy and one of the biggest predictors of victory was to hit 53 combined rush attempts and pass completions in a game. With that, Schottenheimer set out to change the Seahawks' offensive game plan with a focus on establishing the run, even when the defense knew that the run was coming.

On the surface, it appears that it worked. The Seahawks did end up in the postseason with a 10-6 record in a season where not much was expected of them. They ran the ball on 49.6% of their offensive snaps which not only led the league, but it was over ten percentage points higher than the league average of 38.5 percent. Their ground attack, led by PFF’s fifth-highest graded running back Chris Carson was working well enough to string together victories.

Until it wasn’t, and Schottenheimer and company refused to adapt.

In the first half of their Wild Card matchup against the Dallas Cowboys, the Seahawks running backs had nine attempts for 19 yards rushing – which also matched the number of rushing yards that they had after contact. The Cowboys had completely shut down the Seahawks on the ground, and Carson was getting met repeatedly at or behind the line of scrimmage. By comparison, Russell Wilson went 7-for-11 for 97 yards in the first half with two big-time throws.

When you look at the production on first and second down in the first two quarters, the comparison between the Seahawks' ground and air production becomes even more stark. On the ground, they ran eight times for 16 yards on early downs with 19 of those yards coming after contact. In other words, they had negative three rushing yards before contact – not great. On first and second down, Wilson completed seven of eight attempts for 97 yards in the first half. 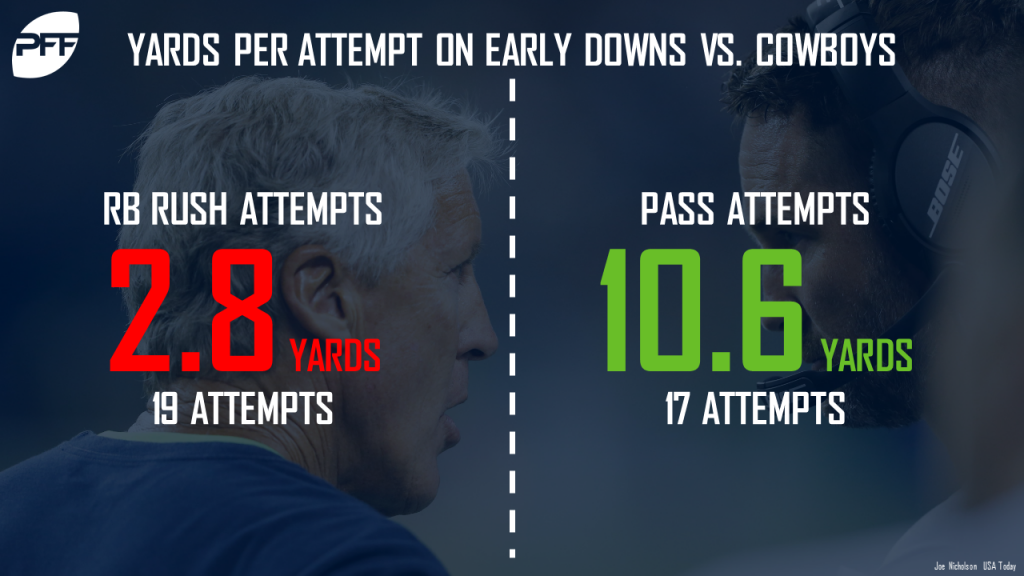 That brings up another point – running the ball frequently on early downs often forces your quarterback to make plays on third down. Wilson had been excellent in that area all season with a league-high passer rating of 113.7 on third down coming into the playoffs, which was a big reason for their playoff berth. Running the ball on first and second down to set up third down only gives your quarterback one opportunity to extend the drive, though. When they do not deliver on third down, the drive is dead. That's exactly what happened in the first half in Dallas, as Wilson did not complete a third-down pass on any of his three attempts.

Given how successful the Seahawks were passing on early downs against the Cowboys compared to how little they were able to accomplish on the ground, one would assume that they would come out after halftime and take the path of least resistance. In this scenario, one would assume wrong.

Schottenheimer and the Seahawks came out and doubled down on establishing the run with 11 handoffs to running backs on early downs compared to nine Wilson pass attempts. On those passing attempts, they averaged 9.2 yards per attempt. On the runs, they averaged just 3.5 yards per carry. There was less of a gap than the first half, but the Seahawks were still giving up over five yards per rush on first and second down compared to a pass attempt.

Russell Wilson was excellent and ultra-efficient on Saturday night, as he has been all season. He finished with the second-highest quarterback grade of the Wild Card Round behind only Andrew Luck. His 8.6 yards per attempt and 105.9 passer rating led all quarterbacks for the weekend. He was particularly effective when he threw the ball deep, which is an area in which he has excelled all season. Against the Cowboys, Wilson completed four of six deep passes for 140 yards with four big-time throws. He certainly played well enough for the Seahawks to win on the road.

Yet, the Seahawks didn’t win because they took the ball out of his hands. Pete Carroll and Schottenheimer stubbornly maintained the course in establishing the run despite little to no success in the first half to indicate that it would work. While Wilson picked apart the Cowboys defense on early downs, Carson had no room to work. That didn’t stop the Seahawks from handing off the ball 19 times to running backs on early downs compared to letting Wilson throw the ball just 17 times. That refusal to put the ball in the hands of their best player and franchise quarterback cost the Seahawks their season.