The Oakland Raiders are still without an interception, through Week 9

OAKLAND, CA - OCTOBER 09: Sean Smith #21 of the Oakland Raiders reacts after he intercepted a pass against the San Diego Chargers during an NFL football game at Oakland-Alameda County Coliseum on October 9, 2016 in Oakland, California. (Photo by Thearon W. Henderson/Getty Images)

According to Josh Dubow of the Associated Press, the 2017 Oakland Raiders are the first team in NFL history to not intercept a pass in their first seven games of a season. Now, through Week 9, the Raiders are still without an interception this year.

With the team on bye in Week 10, the watch for the Raiders first interception of 2017 continues. Their next opportunity will be a Week 11 game in Mexico City against the New England Patriots, but Patriots quarterback Tom Brady has only had eight turnover-worthy plays this season, 1.35 percent of his snaps, so the wait might continue. Their best chance could be a Week 12 meeting with the Denver Broncos as Denver quarterbacks have combined for 12 interceptions this season, second-most in the NFL through Week 9.

In 2016, Oakland tied for the best turnover differential in the NFL at +16, including 16 interceptions. So the question for this season is why? What has changed from the 2016 Raiders to this year's team?

While the opportunities may be slimmer (Oakland ranks in the bottom 10 in opponent's passing attempts per game at 32.0), Raiders defenders have been credited with three dropped interceptions so far this season, and have been unable to make plays on the ball. 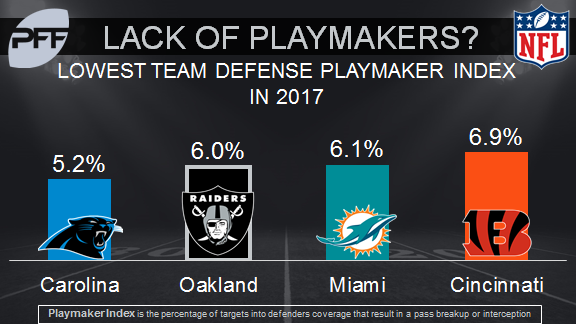 Perhaps the most alarming data concerning the Raiders secondary is their passer rating allowed when targeted. Among all NFL cornerbacks with 100 or more snaps in coverage this season, Oakland cornerbacks have the three highest passer ratings allowed through Week 9. David Amerson tops the list at 156.3. Amerson is also last among corners with 2.22 yards per cover snap this year. Sean Smith has mostly been relegated to a backup role this season, but in 163 coverage snaps this year his 133.6 pass rating allowed is the second-highest. Dexter McDonald has been pressed into more playing time due to injuries, and his 128.0 passer rating allowed is currently the third-highest.

In 2016, safety Reggie Nelson was the team's leader in interceptions with five. He was PFF's 34th-ranked safety in 2016 with an overall grade of 79.3. This season Nelson, now 34 years old, ranks 67th at safety with a 49.0 overall grade. Coinciding, Nelson's coverage grade of 77.3 ranked 41st at safety a year ago, but this season his coverage grade has dropped to 38.5, which is currently 81st of 83 qualifying safeties.

LOOKING TO THE POSITIVES 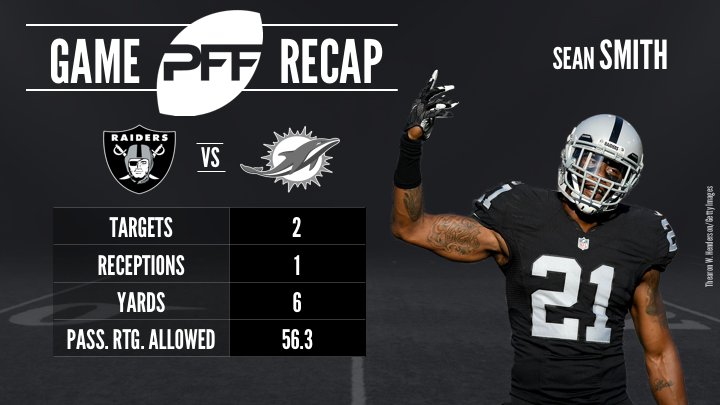 There have been some positives in the Oakland secondary this season, most recently from Smith's performance against Miami in Week 9, in which he was targeted two times, and allowed just one reception for six yards. Cornerback T.J. Carrie has improved his overall PFF grade from 73.4 in 2016 to 82.7 this year, and he ranks 21st at cornerback through Week 9. Carrie leads the team with four passes defensed in 2017. Safety Karl Joseph has also been solid, ranking 19th at safety with an 83.0 grade this season, up from 75.5 in 2016.

The other good news for the Raiders is that help could be on the way. Oakland used their first two picks in the 2017 NFL Draft to improve their secondary, but due to injury those selections haven't paid off yet. First-round pick Gareon Conley has only played 92 snaps at cornerback this year while dealing with a shin injury, and has missed the last six games. Second-round pick, safety Obi Melifonwu made his NFL debut in Week 9 with seven defensive snaps against Miami, and should see extended playing time in the future.