Putting points on the board when working inside of the 20-yard line is paramount for offensive success, which is, of course, much easier said than done. Here, we list the league’s best red-zone tight ends from last season. 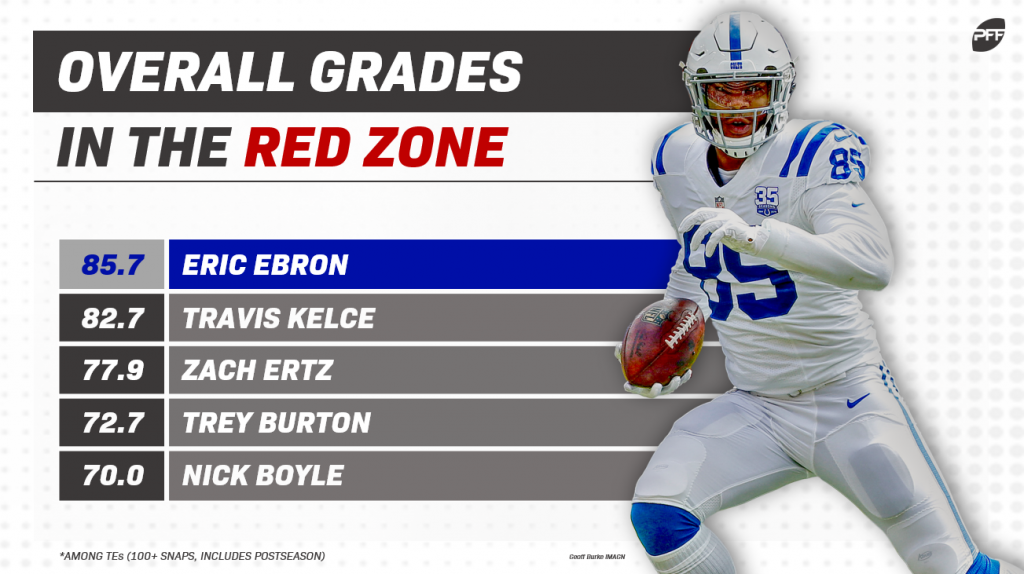 Ebron’s receiving talent at the tight end position was finally showcased throughout the 2018 season with the Colts, especially in the red zone, where he led all players at the position with an 85.7 overall grade. He was targeted on 23 occasions inside the opponent's 20-yard line, catching 13 passes for 141 yards at an average of 1.57 yards per route run. His 12 red-zone scores ranked tied for second among tight ends in the PFF era (Rob Gronkowski – 15 in 2011), and his 14.2 average depth of target listed as the fourth-highest since 2006.

Last season, Travis Kelce was among the very best at the position, especially inside the red zone. Kelce ranked second among tight ends with an 82.7 red-zone grade, and he generated a 109.5 passer rating when targeted inside the opponent's 20-yard line. He led all tight ends with 18 receptions on 25 targets, and his 10 red-zone scores tied for the sixth-best single-season mark of the PFF era.

Ertz finished his record-setting 2018 season with the most ever receptions by a tight end, with 116 on 154 total targets. In his sixth season, he finished as the sixth-highest graded player at the position with an overall grade of 76.0, and inside the red zone, his game went up another level. He ranked as the third-best tight end with a 77.9 red-zone grade, while he also earned an 80.2 red-zone receiving grade. He produced 16 receptions and seven scores on his 26 red-zone targets.

In his first season with the Bears, Trey Burton generated a quiet 69.4 overall grade that ranked 17th at the tight end position. However, inside the red zone, he proved his worth, ranking as the fourth-best tight end with a 72.7 grade. Burton recorded 11 receptions on 12 targets for five touchdowns, while his 131.3 passer rating when targeted inside the 20 paced the league's players at the position.

Boyle is somewhat of an outlier on this list. He ranked fifth among tight ends with a 70.0 red-zone grade, but he only generated a 46.0 receiving grade on 26 snaps as a pass catcher. Boyle was at his best as a blocker in the red zone, a perfect piece to the Ravens’ run-heavy scheme. He spent 82 of his 108 red-zone snaps as an in-line blocker, with 71 being in the running game. He ranked first at the position with a 77.1 red-zone run-block grade last season.