In today's game, getting to the red zone is one thing, but the ability to finish strong and put points on the board is vitally important. Last season, these running backs performed well when they were in scoring position, making them the top-graded running backs in the red zone. 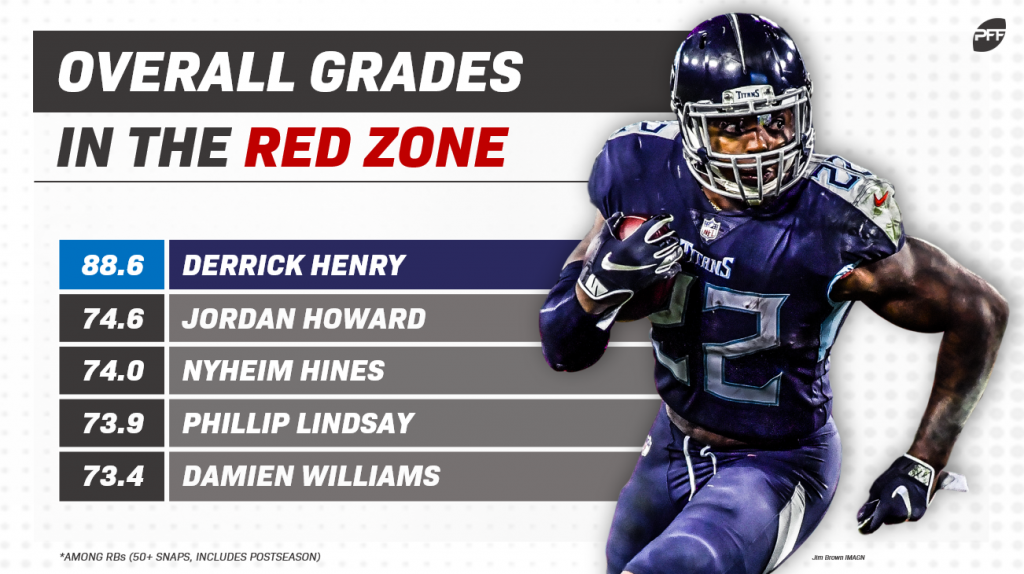 Derrick Henry took a while to get going last year, but when he did, he was nearly unstoppable. No one was better than Henry when within 20 yards of the end zone, as evidenced by his 88.6 overall grade on such plays. Henry totaled 157 yards after contact on 43 rushing attempts in the red zone last season, giving him the most yards after contact per attempt (3.65) at the position. He also ran for a first down or touchdown on 40% of his red-zone carries, ranking ninth out of 66 running backs with at least 10 red-zone attempts.

Jordan Howard had a relatively quiet year in Chicago, but he did help his team a ton in the red zone. On his 34 rushing attempts last season, Howard ran for a first down or a touchdown on 44% of his carries, which tied for third at the position. In addition to having a knack for moving the chains, Howard also averaged 2.09 yards after contact per attempt in the red zone, tying for 17th out of 66 qualifying running backs.

Last season, Hines averaged 2.18 yards after contact per attempt in the red zone, ranking 14th out of 66 running backs. The rookie also forced a missed tackle once every 0.18 red-zone attempts, tying for 16th at the position. His speed and toughness were a lethal combination in the red-zone last season, and the Colts could benefit by utilizing him more in 2019.

Phillip Lindsay took the league by storm last season, as he ran wild in Denver en route to over 1,000 rushing yards as an undrafted rookie. Despite his small frame (5’8”, 190 lbs.), Lindsay was still a force in the red zone, and he did most of his damage as a pass-catcher as his red-zone receiving grade of 74.9 ranked fourth among running backs. In addition, he also ran for a first down or touchdown on 34% of his red-zone carries, tying for 17th out of 66 players at the position.

Damien Williams was one of the Chiefs' many weapons last season, and he was especially effective in the red zone as he was one of only two running backs who earned 70.0-plus red-zone grades as both a runner and a receiver. He also ran for a first down or touchdown on a whopping 47% of his red-zone attempts, ranking second among running backs.