The NFL's best red-zone cornerbacks in 2018

Unlike the NFL's elite offensive playmakers, who generally excel all over the field (including in the red zone), defensive backs tend to be hit-or-miss in the final 20 yards. Oftentimes, the best cornerbacks in the game are not the very best in the red zone, and vice versa. Such is the nature of the instability of defensive play, and such is the case with the best red-zone cornerbacks from 2018 – some of whom were quiet studs, while others are still trying to make a name for themselves in the NFL. 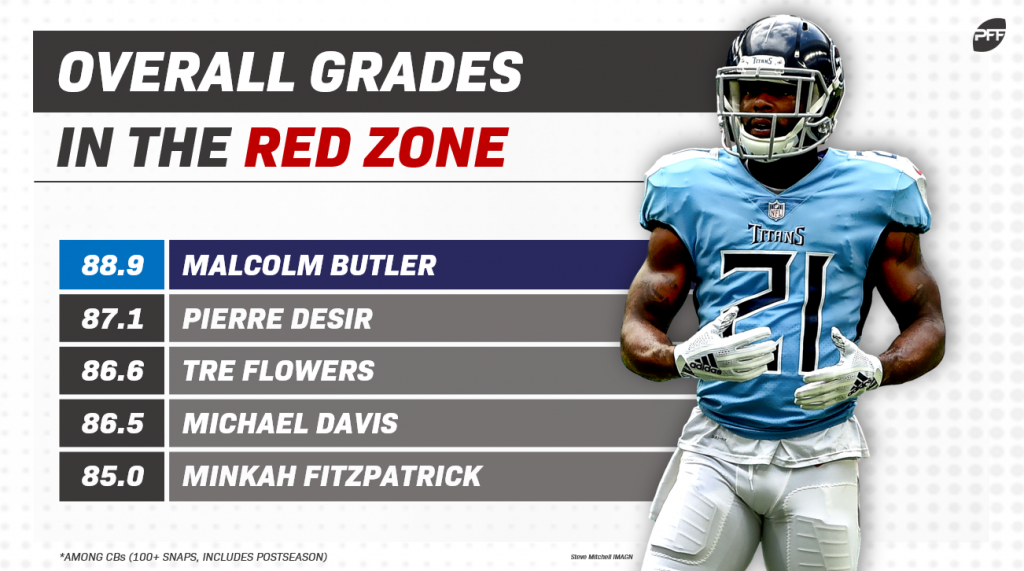 Who else would top this list besides the cornerback who pulled off one of the biggest red-zone plays in recent memory? Fortunately for Butler, his game-sealing Super Bowl interception in 2015 wasn’t a one-off thing — he’s maintained his red-zone prowess since then. In 2018, Butler saw eight red-zone targets, allowing just three of them to be completed for 13 yards while also hauling in an interception. It was his best year in red-zone coverage yet: Butler’s 50.0% forced incompletion rate in the red-zone ranked second among cornerbacks with at least eight red-zone targets, and his 45.8 passer rating allowed ranked fifth.

Desir allowed a mere 14 yards in red-zone coverage but that was at the cost of three receptions allowed, with two of those receptions ending in either a first down or a touchdown. It wasn’t the prettiest coverage effort from the fourth-year corner, but he made up for it in run defense. Desir’s 91.3 run-defense grade in the red-zone is sixth-highest since 2006 for a qualifying cornerback — due in large part to the fact he didn’t miss a single tackle while racking up three stops inside the 20-yard line. It was a breakout year in many aspects for Desir, and it earned him a $7.5M-per-year contract this offseason.

The Legion of Boom is no more, but Flowers certainly made his mark as the Seattle Seahawks’ top red-zone cornerback in 2018; his 86.6 red-zone grade was reminiscent of Richard Sherman’s 85.0-plus marks in 2012 and 2013. Overall, it wasn’t the best year in coverage for the rookie, who posted a 108.3 passer rating when targeted, but in the red zone, he seemed to find his footing. He allowed just 50% of his red-zone targets to be completed, and while it's a small sample size with six red-zone targets, there are plenty of reasons for optimism after Flowers’ strong rookie campaign near the endzone.

Davis quietly put together an impressive 2018 from the red-zone and beyond. In that area of the field, he was one of only three cornerbacks who saw nine or more targets and didn’t give up a touchdown. And among cornerbacks with eight or more red-zone targets, he notched the fourth-best passer rating when targeted (42.4). He wasn’t flashy, finishing the year without an interception on nearly 500 coverage snaps, but he got the job done by not allowing any his opposition to reel in any of his four contested red-zone targets.

Alabama cornerbacks are just a different breed, and Fitzpatrick is no different. The former top-15 overall pick excelled in the red zone, allowing only one yard on six targets. And they came against stiff competition too: Fitzpatrick didn’t allow Tom Brady to complete either of his two attempts nor did he let Kirk Cousins — a top-five red-zone quarterback in 2018 — to complete his lone attempt. That led to allowing just 0.5 yards per reception in the red-zone, best among all qualifying cornerbacks. As the second rookie on this list, Fitzpatrick has plenty of time to develop those skills even further.