The future is now for the Cleveland Browns, Baker Mayfield

It took an injury to Tyrod Taylor to make it happen, but the Baker Mayfield era began in Cleveland on Thursday Night Football against the New York Jets.

Cleveland Browns fans started the evening with anticipation that turned into frustration as a night that many had hoped would end with their first win since December 24th, 2016 did not start well. The offense under Taylor stalled, and they were down 14-0 with 1:42 left on the clock in the second quarter.

Not necessarily by choice, rather due to the injury to Taylor. But here it was, the beginning of the Baker Mayfield era in Cleveland. 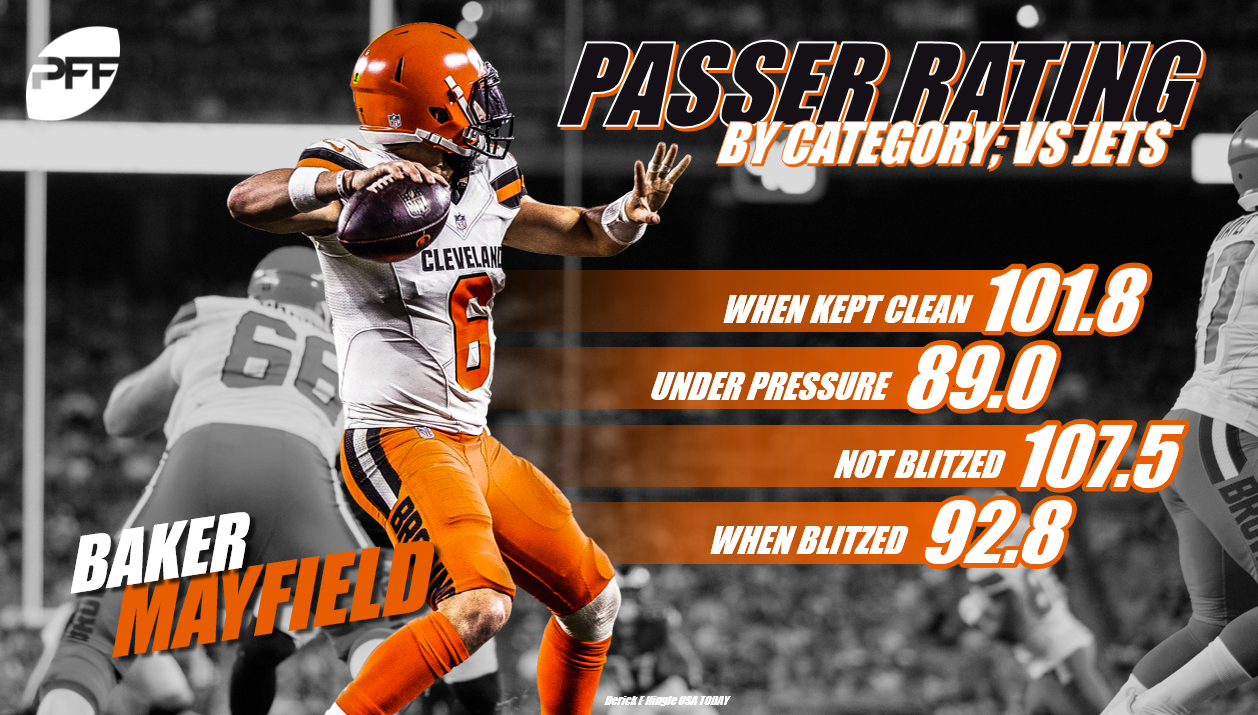 His first two plays moved the chains, finding Jarvis Landry and then David Njoku for first downs. Then the first hiccup. After moving to avoid pressure, he failed to protect the ball well enough as outside linebacker Jordan Jenkins brought him down for the sack and he coughed up the football. Left guard Joel Bitonio saved his blushes though, recovering the loose ball. He then hit Jarvis Landry for a 16-yard gain, before an incompletion on third down meant the drive would end in a field goal.

The drive wasn’t heroic, it wasn’t yet the stuff of legend. Still, with the Browns trailing by 14 and needing something to get going heading into the half, it was good enough.

That drive encapsulated the night fairly well for Mayfield. There was good, there was bad, there was even the downright ugly on a throw that should have resulted in an end-zone interception, but it was good enough. Enough passes that kept the chains moving, enough throws that put the Browns in scoring position, and enough of the Baker-Mayfield magic we saw at Oklahoma to give the Browns fans reason for hope.

Mayfield made plays downfield, going 5-for-9 for 93 yards on throws 10-plus yards downfield, producing a PFF passing grade of 90.8 on those throws. He was solid under pressure, with the exception of that fumble, going 4-for-6 for 66 yards, good for a passer rating of 103.5 and a PFF grade of 65.5 under duress.

His work on the move is highlighted by the above play. 3rd & 5 and the Jets initially do an impressive job in coverage. Mayfield scrambles, cutting past Jenkins, pump fakes and finally finds Duke Johnson on the sideline for the first down. The play wasn’t there initially, but he bought himself enough time to make a play and extend the drive.

As good as Mayfield was, and as much as his skillset extended drives, he almost did the opposite on the following drive. On 3rd & Goal with 5:25 left in the third quarter, he locked onto Landry and flat out missed Doug Middleton, who dropped the would-be interception in the end zone. The Browns kicked a field goal on the very next play, so Mayfield was very close to essentially taking points off the board.

One of his best throws of the night came on the next drive, hitting Landry on the seam route to set the Browns up inside the Jets’ five-yard line. It was a well-placed throw, putting the ball where Landry could go up and get it, and an even better catch, with Landry holding onto the ball despite Middleton’s best efforts.

That drive would tie the game, and the Browns would take the lead for good on the next possession. It opened with another impressive throw by Baker, and what should have been a big play for the Browns. He hit rookie wide receiver Antonio Callaway at midfield for what would have been a gain of at least 27 yards, but Callaway couldn’t hang onto the ball. Mayfield completed two more passes 10-plus yards downfield on the drive, finding a wide open Rashard Higgins for a first down and then Landry across the middle for a 12-yard gain, with the Browns running game and short-passing game doing the rest of the work for the game-winning score.

To temper expectations here just a bit, it is only one half of football at the NFL level, but this was a guy who just got it done every time he stepped on the college field, from double walk-on to the highest-graded QB we've ever seen – twice. Mayfield was the No. 1 player on our draft board for the majority of the 2017 college football season and the player we were most confident in at the NFL level.

He repaid that confidence with significant pressure on his plate, not just from being the No. 1 overall pick, but with the entire city of Cleveland on his shoulders.

After the game, Browns head coach Hue Jackson wouldn’t make the call on who his starter will be for next week’s game on the road in Oakland, and given that the quarterback who started the game had suffered a concussion, you can understand why. That being said, when it does come time to name the starter, it surely has to be Mayfield. Where Mayfield was impressive, producing that 90.8 PFF passing grade on throws 10-plus yards downfield, Taylor has struggled, with a PFF passing grade of just 48.1, going 12-for-31 for 299 yards. Under pressure, he has gone 7-for-24 for just 58 yards and a PFF grade of 45.3 this season, compared to 65.5 for Baker last night.

What was clear on Thursday night is that Mayfield gives the Browns the best chance to win. The Browns are 1-1-1 after three games and have looked good defensively, with an average of just 19.7 points per game allowed. While it’s definitely too early to start thinking about them as a playoff contender, it feels like the guy who has the opportunity to make enough plays for them to be in that discussion, both this year and beyond, is the one who came off the bench and led them to their first victory in 635 days.