The Cardinals' pass rush has no comparison around the league

GLENDALE, AZ - NOVEMBER 22: Head coach Bruce Arians of the Arizona Cardinals celebrates with outside linebacker Markus Golden #44 after defeating the Cincinnati Bengals in the NFL game at the University of Phoenix Stadium on November 22, 2015 in Glendale, Arizona. The Cardinals defeated the Bengals 34-31. (Photo by Christian Petersen/Getty Images)

It seems like every new defensive coordinator wants to be more aggressive at their introductory press conference. Come Sundays though, few are willing to put their money where their mouth is. The NFL average blitz rate last season was 30.2 percent. Even on third and 5-12 yards – obvious passing situations — that number jumps only slightly to 38.4 percent. The disconnect between words and action is evident.

That’s not the case, though, for the Arizona Cardinals under head coach Bruce Arians. His words get backed up on the field. When defensive coordinator James Bettcher was going to play prevent on the last play of regulation against the Packers in the playoffs two seasons ago, Arians famously said, “Hell no, let’s blitz him.” The result was obviously not ideal, but that’s going to happen from time to time. Six weeks earlier the Lions only rushed three defenders against Aaron Rodgers and got burned with the same result. No philosophy is perfect 100 percent of the time, but it’s the unwavering commitment to it that makes the Cardinals defense as effective as it is. 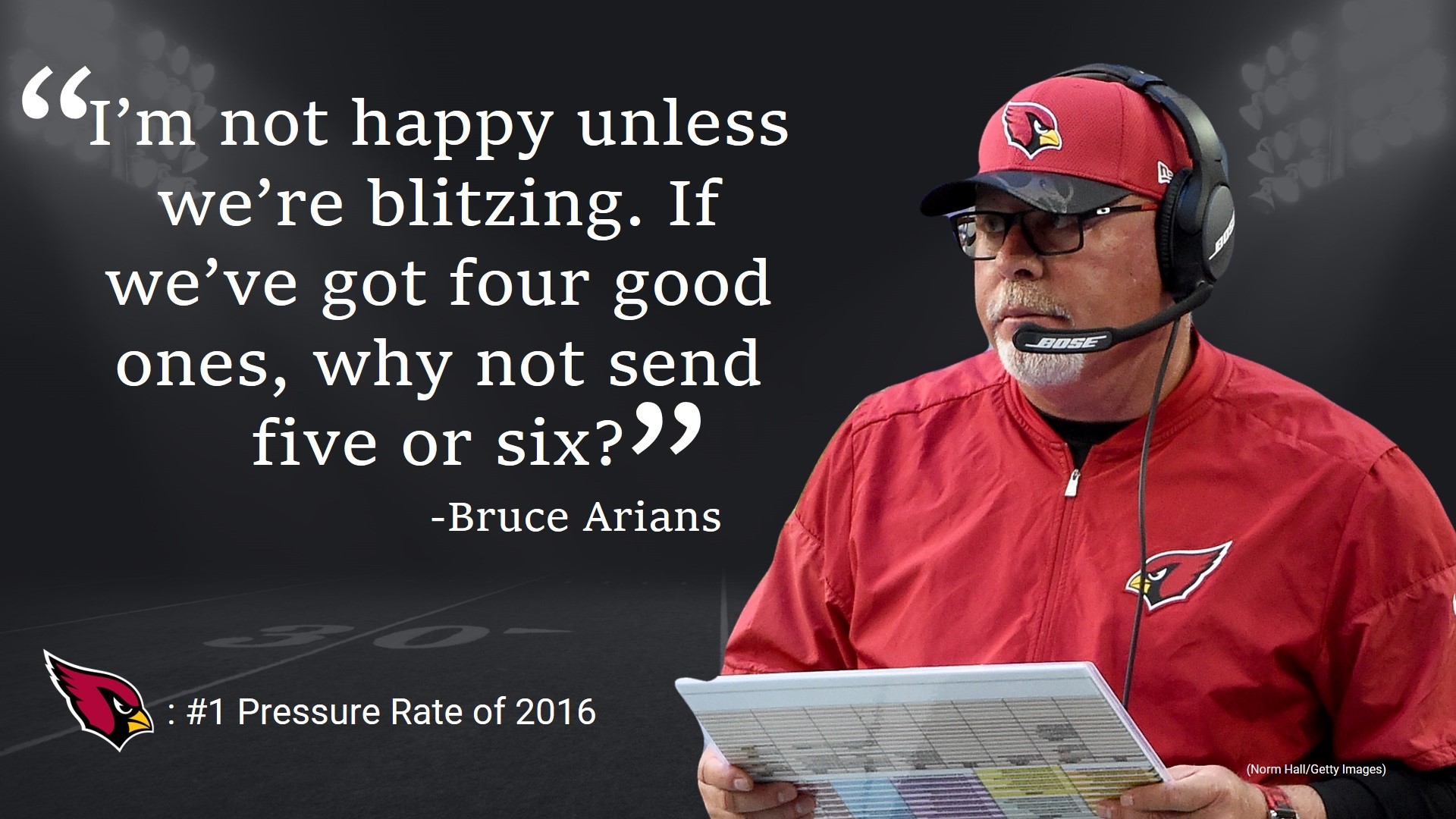 The aggressive mindset has led to top-10 pass defenses three of his four seasons with the Cardinals in terms of yards per attempt. Last season they brought extra defenders on 40.9 percent of opponents passes, the second-highest figure in the league. And it’s not just when they know a pass is coming. On first downs last year, the Cardinals blitzed a league-high 41.4 percent of the time! The league average was 27.1 percent. The Bengals were the lowest in the league at only 9.8 percent. It’s as if Arizona is playing a different game altogether.

It would be one thing if the Cardinals were bringing pressure recklessly yet didn’t have the personnel to execute it. Look at the Saints, who last year were the most blitz-heavy team in the league at 41.3 percent, yet fielded the second-worst scoring defense. The fact of the matter is a blitz has to get home quickly and New Orleans couldn’t do that. The Saints pressure rate was 34.0 percent – a figure below even the league average of 34.5 percent. The Cardinals on the other hand led the entire NFL at 40.1 percent.

The reason why they were so successful is also the core theme of the Teaching Tape series: pairing scheme with talent. Arizona did this in a number of ways. When you have three guys who can get to the quarterback like Calais Campbell, Chandler Jones, and Markus Golden, you want to give them every opportunity to do so. One thing blitzing does is limits double teams. Even the threat of a blitz at times makes it such that an offense has to call their protection to deal with the blitzers and not to help out with certain unfavorable matchups along the line. Giving those three guys above consistent one-on-ones is an obvious recipe for success.

In the play below you can see how this plays out. Arizona brings six defenders on a crucial third down at the goal line.

With every defensive coordinator preaching aggressive defenses, no one still quite does it like ARZ. They blitzed 41% on 1st down last year! pic.twitter.com/y9ClTvRqIN

Even with the running back staying in to block, Jones, Campbell, and Golden all get one-on-ones. All it takes is one to win – in this case Campbell – and the play is blown up.

Maybe the biggest thing that Arizona did better than any other team in the NFL is work stunts. Only the Falcons and Broncos stunted more than the Cardinals did last year, but no one got pressure with them more. They ran stunts on 209 dropbacks last season and generated pressure a ridiculous 110 times. The keys to a well-executed stunt defensively are unpredictability and timing (obviously talent helps as well). Certain formations – like when a defensive tackle lines up in a wide-9 — are dead giveaways stunts. With the Cardinals versatile personnel though, it’s far more difficult to tell where the loopers will be coming from. Take this play below against the Falcons.

And their stunts are masterful. Generated pressure 52.6 percent of time – highest rate in NFL pic.twitter.com/0Ftps8KO9g

First off, the timing is perfect. Golden gets a head of steam before the ball is even snapped and hits right off the outside shoulder of the right tackle. Add in the fact that purely from the formation, it’s impossible to know where the pressure was coming from. The extra man comes on the right side of the offensive formation, yet the protection call was sliding left from the right guard over to deal with Golden’s original position. This leaves two men to block three defenders and the result is an easy sack.

This is all a calculated plan from Arians himself. He simply will not let opposing quarterbacks feel comfortable. On any given down, he’ll bring as many defenders as he feels like, and refuse to be predictable. The results speak for themselves and that’s why they are the Teaching Tape for an aggressive pass rush.