The 100 best single-game grades of the PFF era

While PFF has only been grading NFL games since the start of the 2006 season, we're proud to have been a small part the sport's history throughout these last 13 years. Over those seasons, we've been treated to incredible, standout performances from some of the best athletes to ever take the field. So, with just 100 days to go until the kickoff to the 100th NFL season, here are the 100 best single-game grades of the PFF era.

[Editor's note: This ranking has been calculated using the same overall grades that can be found in Premium Stats 2.0 as a part of the PFF Elite subscription. To qualify for a ranking, a player must have played at least 30 snaps, and in the cases where two or more players earned the same overall grade, we then looked at who earned a higher percentage of positively-graded plays.]

Logging three total pressures and four defensive stops in Week 12 of the 2012 season, Geno Atkins comes in at No. 100 with his 95.5 overall grade against the Kansas City Chiefs seven years ago.

Miami Dolphins' Jason Taylor earned an impressive 95.6 overall grade in his Week 11 bout with the Minnesota Vikings in 2006. Taylor recorded six total pressures, including a sack, and logged one interception and one pass breakup in the process. 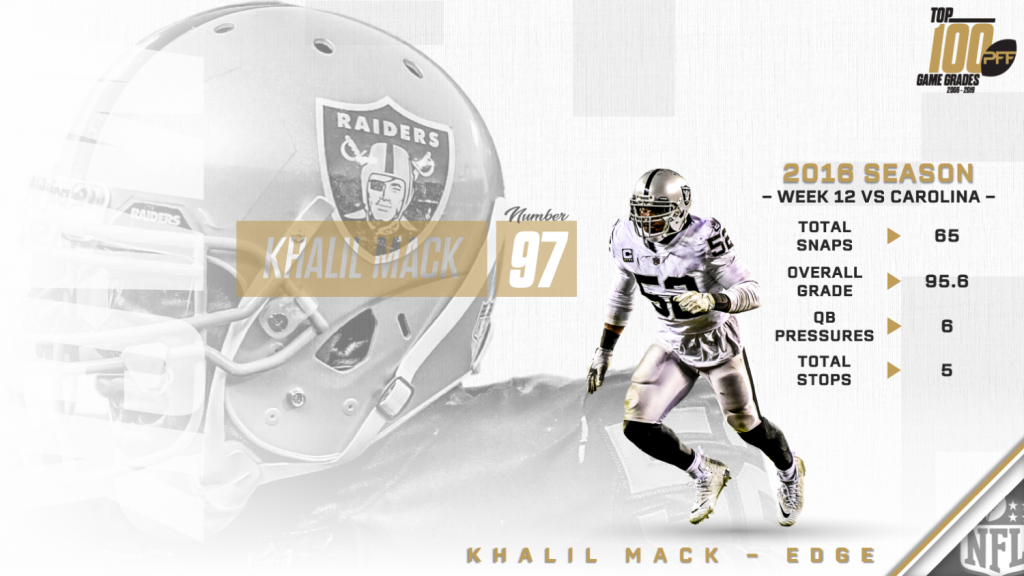 Mack shined as a pass-rusher in Week 12 of the 2016 season, racking up one sack and five hurries from his 32 pass-rushing snaps. In addition to his 92.0 pass-rushing grade, Mack also earned a 92.4 grade in coverage thanks to a second-quarter pick six.

No wide receiver in the PFF era has earned more single-game grades of 90.0 or higher than Julio Jones, who has achieved this mark 15 times throughout his career. Jones ended this particular game with 12 catches from 14 targets for a career-best 300 receiving yards and a career-high average of 9.09 yards per route run.

The retired tight end was no stranger to the occasional big-time performance. In fact, he's currently tied with Jimmy Graham for the ninth-most single-game grades of 90.0 or more by a tight end in the PFF era, with nine. Celek's Week 15 destruction of the Jets was highlighted by five catches for 156 receiving yards and a touchdown; 93 of his yards came after the catch and he generated a perfect passer rating of 158.3 from quarterback Michael Vick.

The Hall of Fame tight end revolutionized the position during his time in the NFL, and he will arguably go down as the best tight end to ever play the game. His Week 7 clash — the first game of an amazing three-game streak — against the Chargers was a testament to Gonzalez's excellence: he caught 6-of-7 targets for 118 yards and earned a career-high 96.0 receiving grade for his efforts.

Gay quite clearly started this game as he meant to go on, as he recorded a sack-fumble from a well-timed blitz on the very first play of this game. Targeted four times on the day, the Steelers' cornerback logged one interception and one pass breakup, and he allowed just two catches for 22 yards. He ended the game with a pass-rushing grade of 95.0 and a coverage grade of 92.9.

The former undrafted free agent shone in coverage throughout the 2007 season, and his Week 3 game was the crown jewel of that great year. He was targeted three times on the day; he allowed one catch for six yards and he recorded an interception and a pass breakup. He capped off a career game by adding a hurry from a blitz and two additional defensive stops against the run.

Then a rookie relatively fresh from the ranks of Utah State, Wagner's Week 14 performance was the first time we saw the kind of impact that he could have on a game. He intercepted two of the five passes that were thrown into his primary coverage, he added two defensive stops against the run and he topped it all off by adding two quarterback pressures from five snaps as a blitzer.

Colledge put forth two single-game grades of 95.0 or higher during the 2008 season, the best of which in Week 16. He allowed just one pressure from 40 pass-blocking snaps and paved the way for Ryan Grant in the running game by earning a career-high 95.1 run-blocking grade.

The ever-reliable guard produced a career game against the San Francisco 49ers in Week 7 of the 2017 season. He kept a clean slate as a pass-blocker and earned a 92.8 run-blocking grade for his work against an impressive defensive front.

The best game of Olsen's career to date, the safe-handed tight end caught all nine of his catchable targets against the Buccaneers, and he racked up nine first downs, 64 yards after the catch and a career-best 181 receiving yards which were, at the time, just three yards short of the PFF single-game record that was held by Dallas Clark.

The former Seahawks linebacker racked up two hits from four pass-rushing snaps on the day, but this game will be remembered for his monstrous tackling effort, which saw him record eight solo tackles and two forced fumbles.

Williams ended this game with an above-average pass-blocking grade (79.3) after he allowed just one hurry from his 39 pass-blocking snaps at right tackle, but what made this game great was his dominance in the run game. He was downgraded on just two of his 39 run-blocking snaps and he left the game with a monstrous 96.8 run-blocking grade — still the fourth-best single-game mark by an offensive tackle in the PFF era.

Widely recognized as one of the best offensive linemen of his era, Vikings legend Steve Hutchinson's best game of the PFF era came in the opening week of the 2007 campaign. He allowed just one hurry from 24 snaps as a pass-blocker, but he dominated as a run-blocker, earning a 93.7 run-blocking grade for his efforts.

Cincinnati's star interior defender has been as reliable as they come in his time in the league. He's graded below 80.0 in just two of his nine professional seasons, and he's graded above 90.0 in three. His best game to date came against the Kansas City Chiefs in Week 11 of the 2012 season — a season that was full of elite performances. In this particular game, Atkins graded above 90.0 both as a run defender (92.9 run-defense grade) and as a pass-rusher (93.2 pass-rush grade); he tallied three total pressures from 30 pass-rushing snaps and he added three defensive stops against the run.

In this game, Roethlisberger completed 13-of-16 pass attempts for 209 yards, five touchdowns, five big-time throws and zero interceptions. Almost unbelievably, he did the most of his damage when he targeted his receivers 20 or more yards downfield, and he completed 5-of-7 attempts for 142 yards and four touchdowns while doing so. 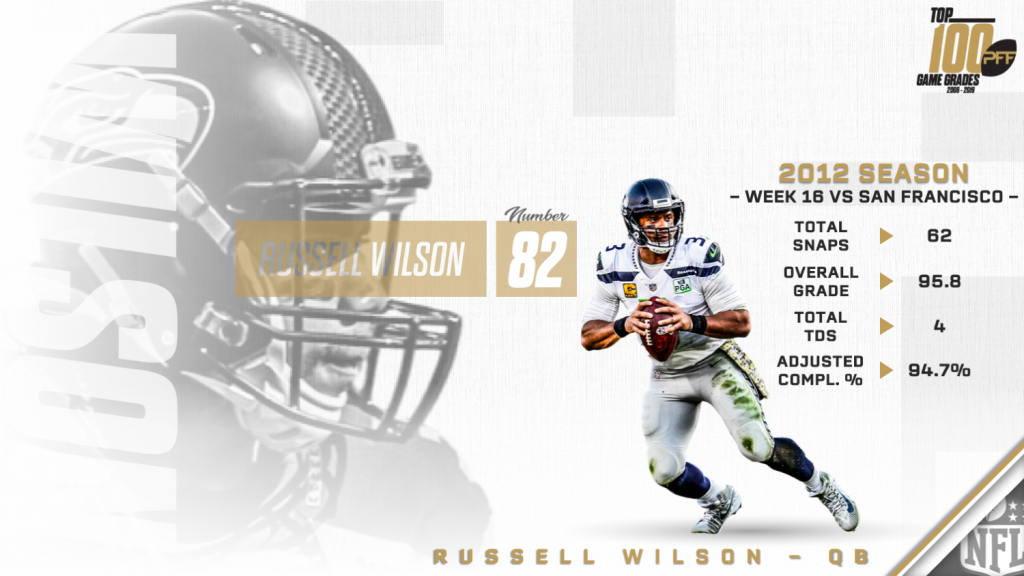 A major reason why Wilson ended the 2012 season as the highest-graded rookie quarterback of the PFF era, Wilson put the cherry on top of a majestic first year with a fantastic performance in Week 16. This performance had it all: He completed 3-of-5 attempts under pressure for 44 yards and a touchdown, he completed 12-of-16 clean-pocket attempts for 127 yards, three touchdowns and three big-time throws, and he wrapped up an all-around excellent outing by adding 30 rushing yards from five scrambles.

Boss hauled in 5-of-6 targets for 46 receiving yards and a touchdown in his team's Week 16 victory over the Panthers, but it was his run-blocking performance that really made a difference in this game. Boss was downgraded on just one of his 40 run-blocking snaps on the day, and he ended the contest with an absurd run-blocking grade of 93.7.

Quinn's 2013 season is still to this day the best single-season performance by an edge defender in the PFF era, and his Week 12 outing against the Bears was a major reason why he finished the season with such a high grade. Quinn racked up an astonishing 11 pressures (one sack, two hits, eight hurries) on the day, and he didn't receive a single downgrade on any of his 68 snaps.

Romo's 2010 season may have lasted all of 357 snaps, but it sure started with a bang. The former Cowboys signal-caller dismantled the Bears in Week 2, completing 34-of-51 attempts for 374 yards, one touchdown and four big-time throws on the day, with 220 of those yards coming from passes that were targeted at least 10 yards downfield.

One of the truly elite safeties of his era, Ed Reed's best game of the PFF era came in his team's divisional round loss to the Colts in 2006. Typical of the kind of player he was, Reed wasn't targeted once in primary coverage on the day, yet he still managed to break up one pass and intercept two more.

Then a cornerback, Graham was targeted three times in his Week 12 game against the New York Jets, and those passes resulted in two interceptions and one pass breakup. He ended the game with a 95.9 coverage grade which is still tied for the 15th-best single-game mark of the PFF era.

Evans started the 2009 season — his best season as a pro — with a sensational performance against the Detroit Lions in Week 1. Playing 72 snaps at right guard, Evans allowed zero pressures from 35 pass-blocking snaps but truly shined in the run game, where he received a downgrade on just one of his 37 run-blocking snaps. He received a run-blocking grade of 93.5 by the game's end — the second-best single-game mark of Evans' remarkable career.

Yanda has delivered many strong performances over the years, but few were as good as this Week 6 clash against the Tampa Bay Buccaneers. As you'd expect, Yanda held up fine in pass protection — he allowed one pressure on 31 pass-blocking snaps on the day — but his work in the ground game was truly something special. He received just one downgrade on 30 run-blocking snaps and ended the game with a career-high 96.1 run-blocking grade — a single-game mark that has beaten just once since.