Underdogs in all three of their postseason games, the Philadelphia Eagles beat the odds every step of the way and knocked off Tom Brady and the New England Patriots to win Super Bowl LII.

A shootout from start to finish, Eagles quarterback Nick Foles matched Brady & Co. score for score, leading Philadelphia to the 41-33 win with 373 passing yards and four total touchdowns (one receiving).

Of course, Brady played his part in the duel, completing 28-of-48 passes for 505 yards and three touchdowns. However, a late sack-fumble at the hands of Eagles' Brandon Graham and an incomplete ‘Hail Mary' were ultimately the deciding factors in the contest.

On the biggest stage, Nick Foles played perhaps the best game of his career. He was deadly when given a clean pocket, going 21-of-29 for 280 yards and two touchdowns. Foles ended the year with one of the more impressive back-to-back performances in recent playoff memory, completing 71 percent of his passes for over 700 yards and six touchdowns over that span. Much credit will be due to his offensive line, as he was only pressured on 14 of his 43 drop-backs.

Brooks was part of a unit that kept Foles clean on a majority of his dropbacks while paving the way for the Eagles' running backs on the ground, leading to 164 rushing yards. Brooks finished with both the top run grade and pass protection grade among Eagles linemen, grading above 85.0 in each category. All three running backs played a large role, with Blount and Ajayi forcing a combined six missed tackles while Clement hauled in four passes for 100 yards.

Graham made arguably the play of the game with his strip-sack on Tom Brady with a couple minutes left in regulation, which allowed the Eagles to both extend their lead to eight and burn more time off the clock. Graham led the Eagles with seven total pressures (one sack, two hits, four hurries), and it was his highest-graded pass rushing performance since Week 1 of the season.

Cox was not getting to the quarterback as quickly as he does in many games, but he still made an impact by forcing Brady out of the pocket a couple times and preventing him from fully stepping into a couple throws. Cox finished with one hit and five hurries, marking his ninth game this season with five or more total pressures, including all three postseason games.

Brady had a nice night and racked up a ton of passing yardage. However, he missed a few more throws than he typically does and had an interception dropped on the second-to-last play of the game that could have sealed the loss without even getting a ‘Hail Mary' attempt. Brady had an adjusted completion percentage of 67.4 percent, his third-lowest of the season.

Gronk had a forgettable first half, with just one catch for nine yards, and was beaten as both a pass and run blocker on multiple occasions. But the Patriots were able to get him the ball much more often in the second half, with eight catches for 107 yards and two touchdowns. On the night, Gronk had catches against six different defenders in primary coverage, but both touchdowns came against CB Ronald Darby.

Flowers was kept quiet throughout most of the game, but his pass-rush effectiveness started to show in the fourth quarter, primarily working against Eagles left tackle Halapoulivaati Vaitai. Flowers registered five pressures but was unable to get a hit or sack on Nick Foles. Flowers and James Harrison were the only two Patriots to generate much of a pass rush, combining for 13 total pressures.

On a night where the Patriots' defense was picked apart at times, Gilmore was stout in coverage throughout the game. He was targeted six times, allowing only three catches for 19 yards and recording a pass breakup. Gilmore had a solid playoff run for the Pats, as he was targeted 16 times, allowed 8 catches and notched three pass breakups. 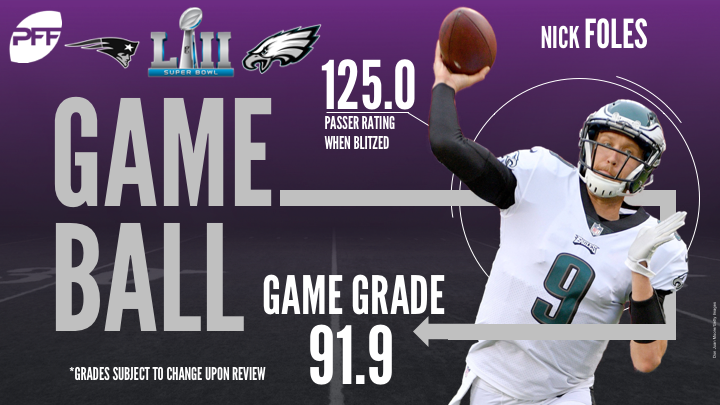