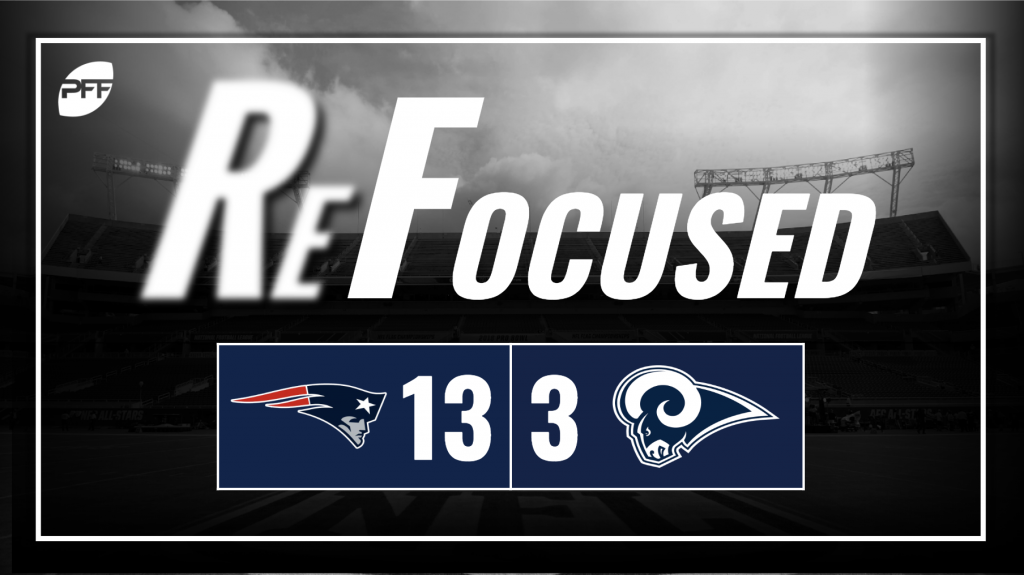 It was clear the Patriots were focused in on slowing down the Rams' outside zone scheme, as New England spent much of the game with five men up on the line of scrimmage (a tough look for the Rams' offensive line to block in that scheme), making it difficult for Todd Gurley and C.J. Anderson to find much running room.

As they did in the AFC Championship game, the Patriots played a heavy dose of man coverage, forcing Jared Goff to make throws into tight coverage. That, combined with effective stunts that put Goff under consistent duress in the pocket, limited the effectiveness of the Rams' passing attack all game long.

Tom Brady was dreadful in the first half of Super Bowl 53, but a good sign for him to turn things around in the second half was that the Rams' defensive line was not getting very much pressure. Brady thrives from a clean pocket and while he was far from perfect in the second half, his regression to the mean was enough for him to hit a couple of throws including the biggest one of the night to Rob Gronkowski to set up the lone touchdown of the game.

Julian Edelman won the MVP and rightfully so. He was the top-graded offensive player by a large margin and caught 10 of his 11 targets for a passer rating of 118.8. The Rams tried switching up who was covering Edelman, and it didn't matter. He always found a way to get open and convert first downs.

Very little went right for the Rams' offense tonight, but they simply didn't get enough from Goff and the passing game. While Goff managed a few impressive throws to the intermediate area, the open throws he's been accustomed to throughout the season weren't there and Goff struggled to overcome that.

Much will likely be made about Gurley being a non-factor yet again, but his lack of touches was hardly the reason for the Rams' offensive struggles. Instead, Bill Belichick and the Patriots unsurprisingly put together an excellent defensive game plan, and the Rams simply didn't have the answers.

Defensive Player of the Year Aaron Donald had one hit on Brady and not much else. It was a tremendous effort by the Patriots' offensive line and coaches to scheme up ways to minimize his impact with runs away from Donald and multiple double teams.

Marcus Peters and Lamarcus Joyner both played well in the secondary with Peters forcing a couple of incompletions and Joyner locking down his man in coverage. Peters did allow a couple of first downs when targeted, but his play and the Rams' defensive effort was more than enough to win the game.

Even though the game wasn't out of reach until the very end, the young duo of Sean McVay and Goff simply didn't have the answers to overcome a quality defensive gameplan from Belichick and the Patriots, and it never felt like the Rams could seriously threaten as a result.