The Pittsburgh Steelers secured a first-round bye with their 34-6 victory over the Houston Texans at NRG Stadium.

QB T.J. Yates had to leave for part of the game but came back and finished 7-of-16 for 83 yards, throwing a touchdown and an interception. He also fumbled three times, losing one of the them to the Steelers. The Texans found success on the ground, rushing for 176 yards as a team on 28 carries, but it wasn't enough to regularly influence the scoreboard

QB Ben Roethlisberger was 20-of-29 for 225 yards and two touchdowns. He did not have any turnovers on the day. RB Le'Veon Bell rushed 14 times for 69 yards and punched in a score, and WR JuJu Smith-Schuster led the team in receptions (six) and receiving yards (74) and had a touchdown of his own. With that, we give you our PFF-exclusive takeaways from the contest for each team.

For a game where he really wasn't asked to do much, Ben Roethlisberger delivered when called upon by the Steelers on Monday afternoon. The Texans struggled to get pressure on him, and that was key, with Big Ben producing a passer rating of 111.0 on plays without pressure.

Marcus Gilbert's return to the starting lineup gave a boost to the Steelers offense, with the right tackle allowing zero pressures on 32 pass-blocking snaps, good for a 100.0 pass-blocking efficiency. The Steelers couldn't ask for more as they head towards the playoffs, where they sit three wins from another Lombardi trophy

Even though Hilton was not targeted once on his 14 coverage snaps, his play was impressive because of his pass-rushing performance rather than his work in coverage. While Hilton rushed the passer just eight times, he was able to pick up a pressure on half of those as he recorded three sacks and one quarterback hurry against the Texans.

Burns locked down Will Fuller against the Texans and had one of his best games in coverage all season. Burns played 29 snaps in coverage and was targeted just twice and did not allow a reception on either occasion. Furthermore, his interception in the end zone on fourth down came at a key moment when Houston still had a chance to come back into the game.

Hopkins was once again a vital part of the Texans offense, as he recorded half of Houston's receptions and had 65 of the Texans' 93 receiving yards on the day. Even though the first two passes going his way were incomplete – neither were catchable – Hopkins caught all four of the remaining passes going his way, including one of the best catches you will see all season when Hopkins tipped a pass in the end zone and then caught it at the sideline while fighting off Joe Haden for the ball.

Yates never found his rhythm against Pittsburgh and struggled all afternoon. The Houston signal caller had just nine catchable pass attempts on 14 pass attempts and even some of these required some luck or DeAndre Hopkins making a great play in close coverage. Furthermore, Yates completed just six of his 13 passes for 70 yards when he was kept clean.

The Texans rookie linebacker was one of the few who flourished, making a bunch of key tackles. Cunnigham made seven tackes resulting in a defensive stop, and finished the day with the highest grade of any Texans defender in coverage.

Despite playing just 27 snaps, Cole made a solid impact for the Texans, with his lone tackle resulting in a defensive stop. Over the course of the game he saw just one pass thrown into his coverage, with the linebacker breaking it up. 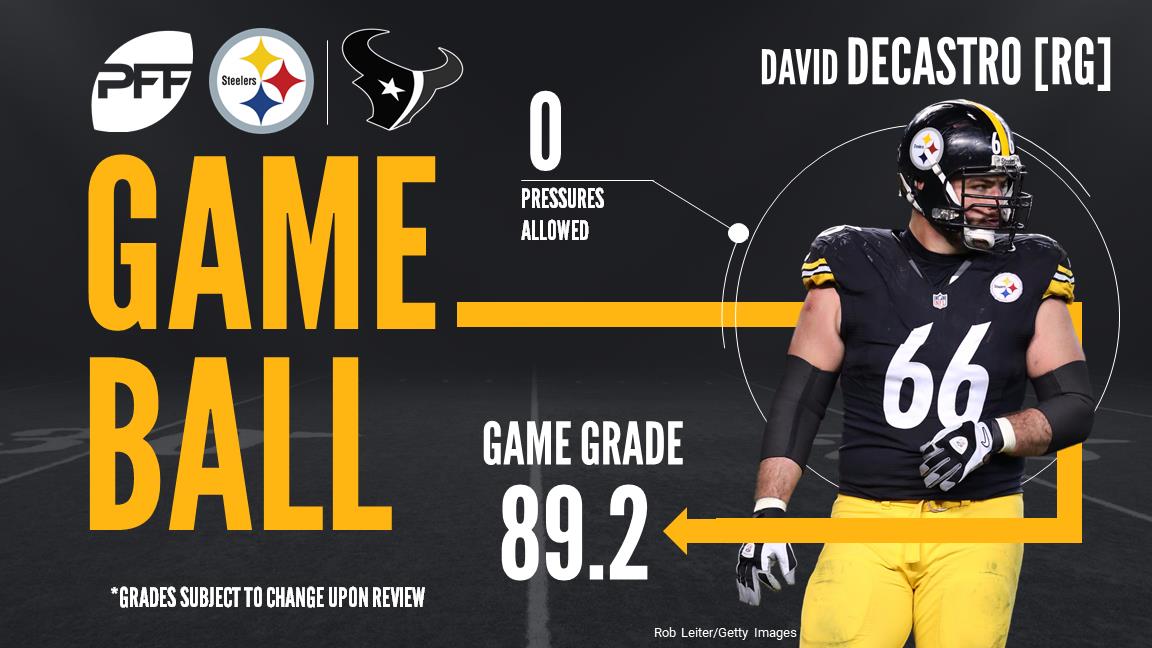