While quarterback Carson Wentz watched from the sideline in street clothes, Philadelphia Eagles quarterback Nick Foles led his team to a 15-10 victory over the visiting Atlanta Falcons at Lincoln Financial Field on Saturday to advance to the NFC Championship.

Executing a simple, RPO-laden game plan, Foles put together an efficient performance under center, completing 23-of-30 passes for 246 yards.

Eagles running back Jay Ajayi also strung together a few highlight plays to provide a spark out of the backfield for his offense, totaling 98 yards on 20 touches.

The Falcons were within arm's reach until the very end, as quarterback Matt Ryan drove 74 yards down the field in the final minute before falling flat inside the 10-yard line. Ryan completed 22-of-36 passes for 210 yards and one touchdown on the day. But, of course, his lone score wasn't enough.

Even though Johnson allowed three total pressures in this game, overall, the Philadelphia offensive line did a good job of protecting Foles. However, Johnson made up for his mistakes in pass protection by a dominant performance in run blocking. The Eagles right tackle had numerous impressive blocks, including one on the run that sealed the game for the top seed in the NFC.

Although the Eagles emphasized the running game, wide receiver Alshon Jeffery still had 61 receiving yards against the Falcons. Jeffery proved to be reliable in the entire game, bringing in all four of his catchable targets. His most important play came at the end of the second quarter, as he got behind Brian Poole on an out route and managed to get out of bounds with one second left on the clock so the Eagles still had time to score a field goal right before halftime.

Cox tallied two pressures against Atlanta (one hurry and a sack), but it was his play in run defense that really stood out, ending the day with a near-elite 89.5 grade in that department. Cox racked up five run stops on just 17 snaps in run defense, giving him a 29.4 run-stop percentage for the game, the highest run-stop percentage posted by an interior defender since Sheldon Day (37.5) in Week 13.

Graham finished this one with three pressures (two hurries and a hit) to go with two stops; he's finished every game he's played in this season with at least two pressures and he's recorded multiple stops now 11 times. Graham has had a brilliant season so far (following a 93.9 overall grade in 2016), and he heads into next week's conference championship matchup with the seventh-best grade among edge defenders at 91.7 overall.

Coleman and Devonta Freeman each carried the ball 10 times in the divisional round, with Coleman averaging 7.2 more yards per carry than his teammate. Coleman earned 47 of his 79 yards after contact, forced two missed tackles on the ground and earned at least five yards on seven of his 10 attempts. Coleman finishes the season ranked 30th among HBs with a 75.1 overall grade.

While it wasn't a great game for the offensive line as a whole, Matthews turned in a solid performance. The fourth-year player allowed just two pressures on the day (both hurries) and led the offensive line with an 84.8 run blocking grade. Matthews ends the season ranked 14th among offensive tackles with a career-high 80.9 overall grade.

Jarrett was one of the few players on the Atlanta defense who had a good outing in the Falcons' loss to the Eagles. Atlanta's young interior defender was nearly unblockable in the running game and picked up a quarterback hit as well. However, his penalty at the end of the game was very costly, as it put the Eagles in an easier situation to pick up the first down that would seal the game.

The stage did not appear to be too big for edge defender Takkarist McKinley in the first playoff game of his career. Atlanta's rookie made some plays in the running game; however, he was mainly on the field to rush the passer and did not disappoint in that category, either. McKinley led Atlanta's pass rush with three total pressures (one sack and two quarterback hurries) on just 17 pass rushing snaps. 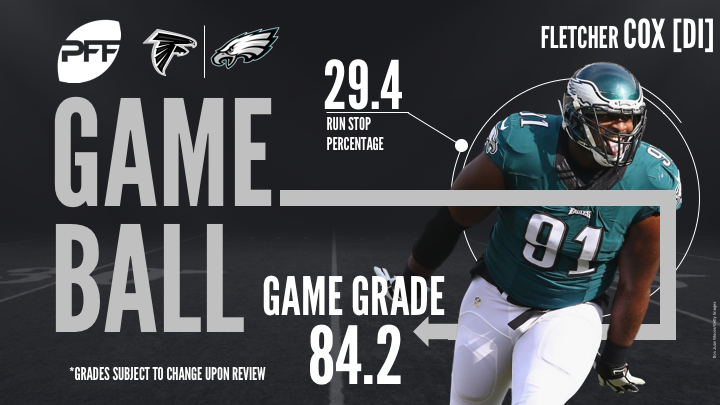