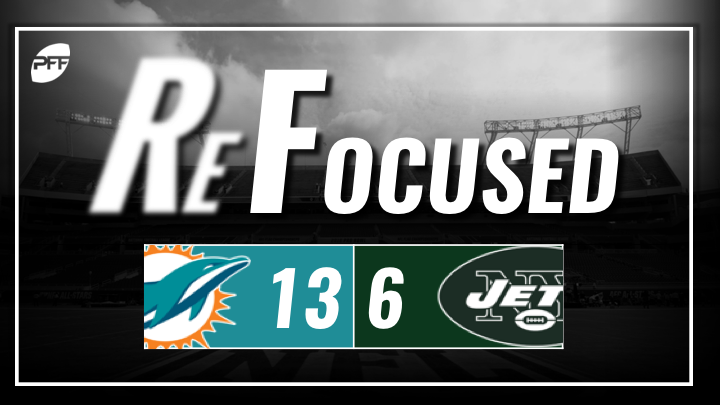 Brock Osweiler didn't win this game for the Dolphins, but they'll be happy that he didn't lose it. He kept it incredibly safe, barely looking beyond 10 yards downfield (when he did he usually missed the throw) and not forcing any bad passes. The Dolphins' offense did next to nothing all game, but at least their drives ended in punts and not Osweiler interceptions.

It was a good day in the record books for Frank Gore, as he passed the legendary Barry Sanders for sixth-most scrimmage yards of all time, but it was not an effective day for the veteran running back. His 2.7 yards per attempt wasn't on him, though, as his offensive line gave him no help. He was hit in the backfield constantly, and almost all of his yards came after contact. He also managed to force multiple missed tackles.

Dolphins' Akeem Spence played like a man possessed. He was dominant and fun to watch. Cameron Wake and Davon Godchaux also held their own up front for the Fins.

Kiko Alonso was all over the field from his linebacker position, and Minkah Fitzpatrick and T.J. McDonald were factors in run defense from their secondary positions.

The Jets' defensive line completely owned this game. Leonard Williams was a beast, as he racked up pressure after pressure when the Dolphins tried to pass the ball. He also contributed in completely shutting down the run game. The Dolphins only gained 60 yards on 24 designed run plays, and Williams' disruption up front was a big reason for that.

Safety Jamal Adams was another standout for the Jets' defense. He was all over the field, making stops in the run game and then dropping into coverage and making plays there. He also had a couple of batted passes when he was sent on a blitz.

Sam Darnold was bothered by the pressure of the Dolphins front-four. As the game progressed, he became more aware of it and clearly did not find comfort in the pocket. He had some coverage misreads and forced some throws in the second half.

Isaiah Crowell had a couple nice runs. Ultimately, the Jets could not find their rhythm on offense, as the Dolphins defense dominated the day.

The Dolphins' pass-rush was stifling.

The key to this game was Jerome Baker jumping a route and taking a Darnold pass to the house for the only touchdown of the game on his pick-six. That was the difference.