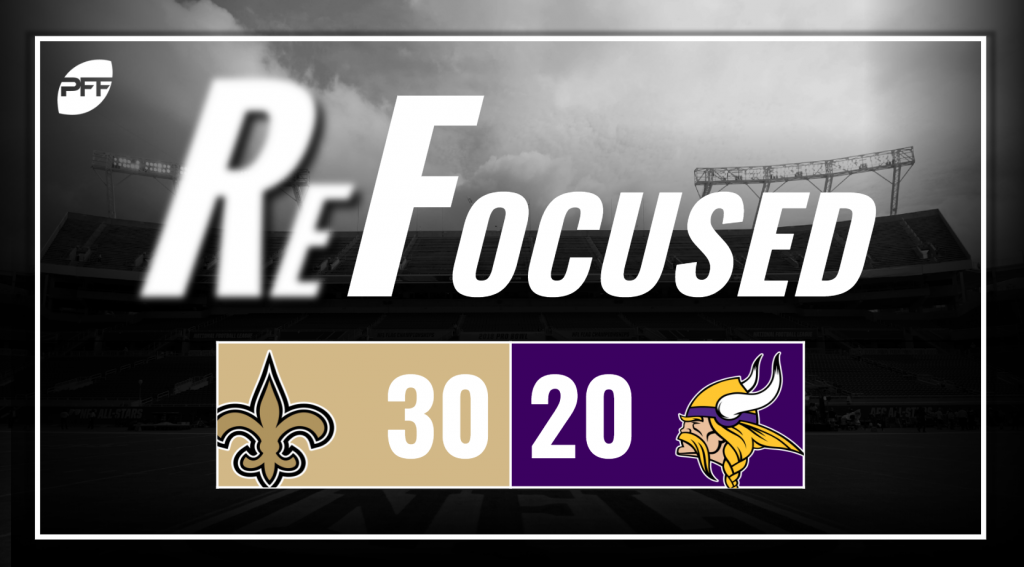 PJ Williams had a mixed day in coverage. While he had an interception for a touchdown, this was because of Stefon Diggs stopping on a route and Williams being the beneficiary of it. He also forced the fumble at the end of the first half, and those two plays where enough to save his game. If it wasn't for those two plays, Williams was frequently beat in coverage, as the Diggs and Adam Thielen where too much for him.

Drew Brees had a below average statistical game for his standards and threw his first interception of the season, which is saying a lot to how much success he’s had considering it’s Week 8. Brees threw for 120 yards on 23 attempts, but he won’t mind any of that, as his team won it’s sixth straight game.

The duo of Mark Ingram and Alvin Kamara combined for 106 yards on 29 carries and 10 receptions for 60 yards. Kamara scored two touchdowns and had the highest number of targets in the passing game at eight.

The Vikings' offense runs through their top two receivers. Theilen and Diggs recorded 100 receiving yards in the contest. The only two mistakes from this week are what kept them from winning, as the Saints forced a Thielen fumble at the end of the half, and then Diggs and Cousins not being on the same page gave the Saints an easy pick-six.

The offensive line for the Vikings was missing their starting left guard and tackle. In the first half, it looked like they would be just ok, but that wasn't changed quickly in the second half. The Saints' defensive line was too much for the Vikings, as they pressured Cousins on a consistent basis.

The Vikings' defense did their part against a high-powered Saints offense, limiting them to under 300 yards of total offense. They weren’t able to generate much pressure on Brees, but when they did, it resulted in positive defensive plays, such as the interception.

After a big first quarter, Michael Thomas was limited the remainder of the game. Credit rookie Holton Hill, Trae Waynes and company for bouncing back and holding him under 100 receiving yards.

New Orleans didn’t generate much offense but converted third downs in critical situations and played keep away when it mattered most. The Vikings' defense held Brees to under 150 passing yards and threw his first interception on the year, but the Saints get the last laugh and win their sixth straight.

The Vikings' turnovers were too much to for the Vikings to live with. The defense was unable to stop the Saints frequently, and then the 17-point swing from the end of the first half to the interception return for a touchdown put the Vikings in a hole they were unable to get out of.