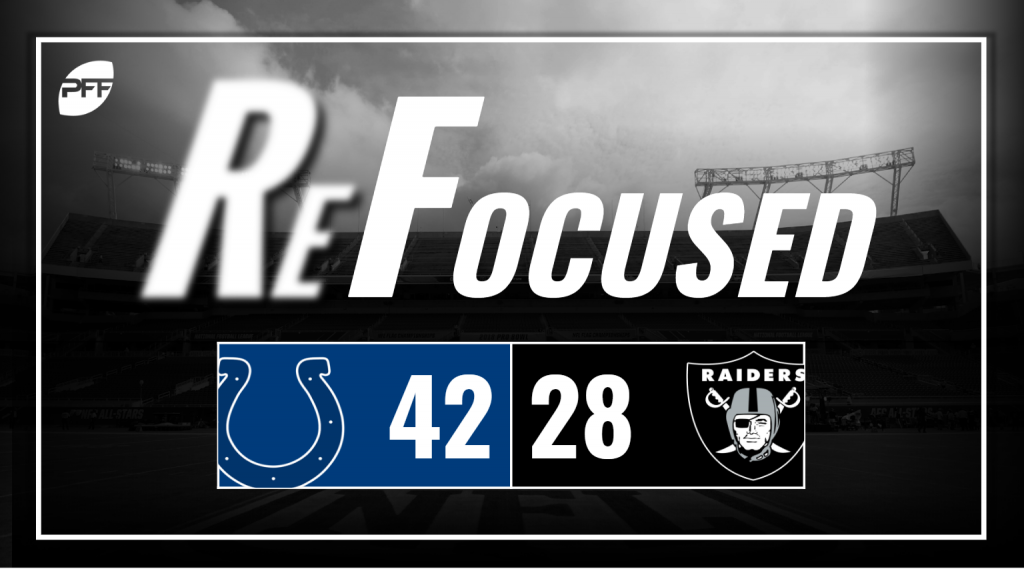 The Colts' offensive line has been one of the worst in the league for some time, but with a run-heavy game plan, this season's re-tooled line came to the fore again, paving the way for a big day for Marlon Mack. Against rookie linemen Maurice Hurst & Arden Key, in particular, the Colts' front five made their mark, setting a consistent platform for Mack and undersized Nyheim Hines.

Eric Ebron didn't have the volume of targets or snaps this week, but what he did do was provide a red-zone presence capped off with his seventh receiving touchdown of the season. Going up over Karl Joseph midway through the third quarter, Ebron brought the Colts level, and from there, the Colts' ground game took over.

Rookie linebacker Darius Leonard has impressed this season, and that continued up in Oakland this week. Leonard was all over the field, once again leading his defense in tackles, and he was an impact player against the run. Leonard recorded a handful of stops in run-defense, including a crucial stop in the fourth quarter when he punched the ball out of Doug Martin‘s arms to halt any potential Raiders comeback.

It was a tough game for second-year linebacker Anthony Walker, whose performance has taken a nose-dive in recent weeks after a strong first few games to start the season. Walker was picked apart in coverage over the middle of the field, missed a couple of tackles and got a bit too aggressive and overpursued the ball.

Coming off of the bye second-year cornerback Gareon Conley racked up a career-high in snaps, playing just shy of every single defensive play for the Raiders. Conley registered a pass breakup in coverage on TY Hilton and gave up little else aside from Mo-Alie Cox‘s spectacular one-handed touchdown grab over him in the first quarter. It was an encouraging performance from a player Raiders fans hope can nail down a starting spot for the long term.

Jonathan Hankins has been arguably the Raiders' best personnel acquisition this season, as his performance again raised questions of why it took so long for him to be signed. Against his former team, Hankins proved that he is one of the best run-defense specialists in the league. He racked up multiple stops and tried to single-handedly stem the tide of the Colts' ground game.

It was a good but not stellar day for Raiders quarterback Derek Carr. He didn't make any big-time throws in Week 8, but he also didn't record any turnover-worthy plays, either. Oakland didn't have a hyper-aggressive passing attack, but he did a good job spreading the ball all over the field and was able to connect on a couple of deep passes, one of which went for a touchdown. Carr didn't have to face a ton of pressure against the Colts, but he looked more comfortable handling it then he had for most of the season.

Oakland's offensive line did a really nice job keeping the pressure off of their quarterback against the Colts. Carr dropped back to pass 29 times on the afternoon and saw pressure on roughly a handful of those dropbacks. It's been a rough season so far for Oakland's rookie left tackle Kolton Miller, who had the worst game of his career in Week 6 against the Seahawks, but he bounced back nicely in Week 8 with one of his best games in pass protection so far.

The Colts' ground game was the centerpiece of their big offensive performance. Whether it was got-to-have-it conversions, consistent production or big plays, the offensive line, Mack and Hines delivered.

Oakland got things going offensively in the middle section of the game and were right there with the Colts into the fourth quarter. Untimely, turnovers can cripple a comeback attempt, and unfortunately for the Raiders and their fans, that happened today.