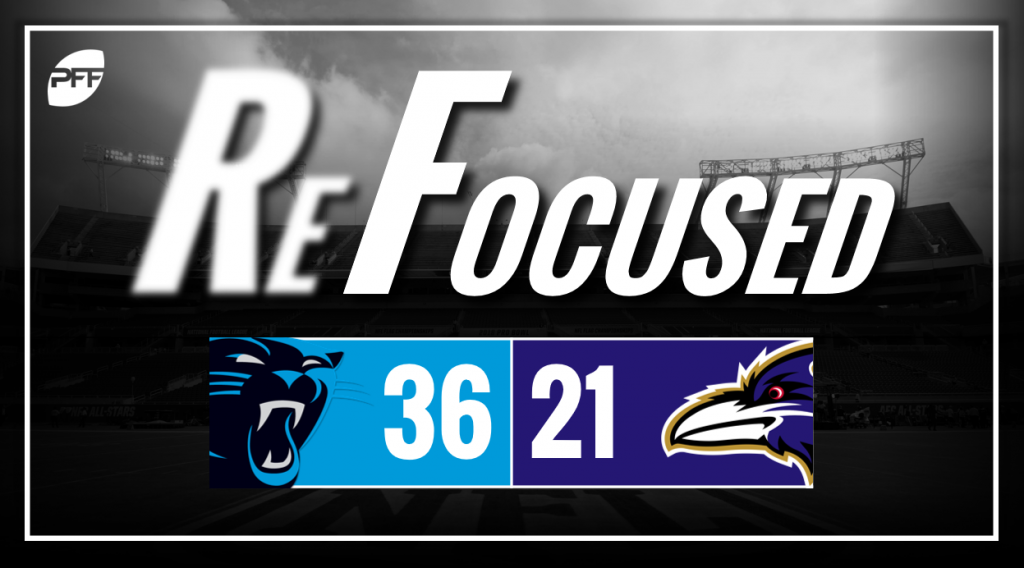 Luke Kuechly had quite a game, recording a sack, a few pressures and a pass breakup in coverage. The linebacker trio of Shaq Thompson, Thomas Davis and Kuechly combined for 23 tackles with Thompson leading the way with 13.

It was a solid day for the Panthers secondary, picking off Joe Flacco two times and limiting the trio of Willie Snead, Michael Crabtree and John Brown to only 11 combined catches on 23 targets. Eric Reid played perhaps his best game as a Panther, recording seven tackles and a sack.

Cam Newton was effective and efficient as a passer. Newton took advantage of coverage busts in the middle of the field and keep the chains moving.

D.J. Moore nearly had his first 100-yard receiving game (finished with 90 yards), as he was Newton's favorite weapon early. The Panthers found ways to get the ball in Moore's hands early to use his speed to make plays.

Za'Darius Smith, while he didn't record a sack, recorded multiple pressures and provided the only real pass-rush throughout the game for the Ravens' defense.

Nose Tackle Michael Pierce was a big piece of the defensive front to slow down Christian McCaffery, as they limited him to just 45 yards on 14 carries. Pierce was tough to move at the point of attack on the Panthers' power running game, often clogging the running lane and forcing McCaffery to cut away from the designed point of attack.

After falling behind early, Baltimore went away from the ground game where they were able to find success early until a costly fumble on a play blown up in the backfield. Apart from the fumble, Alex Collins ran strong and forced a number of missed tackles going for 49 yards on 11 carries.

It was a shaky performance by Flacco, as he threw two interceptions but was able to mix in a few good throws that his wide receivers dropped. Flacco ended with 192 yards and a 56.8 quarterback rating. First-round pick Lamar Jackson entered in garbage time, throwing his first career touchdown pass to fellow rookie Hayden Hurst.

The Panthers' offense did not put the high flying numbers, but they were able to convert in the red zone and rarely put the ball in any danger, as the Ravens' defense was unable to stop them. Once the Panthers hit the fourth quarter with the lead they killed the game with two five-minute scoring drives that put the game out of the reach of the Ravens.

It was more bad than good from Flacco on Sunday, and the Ravens usually go how he goes. Credit the Panthers' defense with a solid performance, as well.