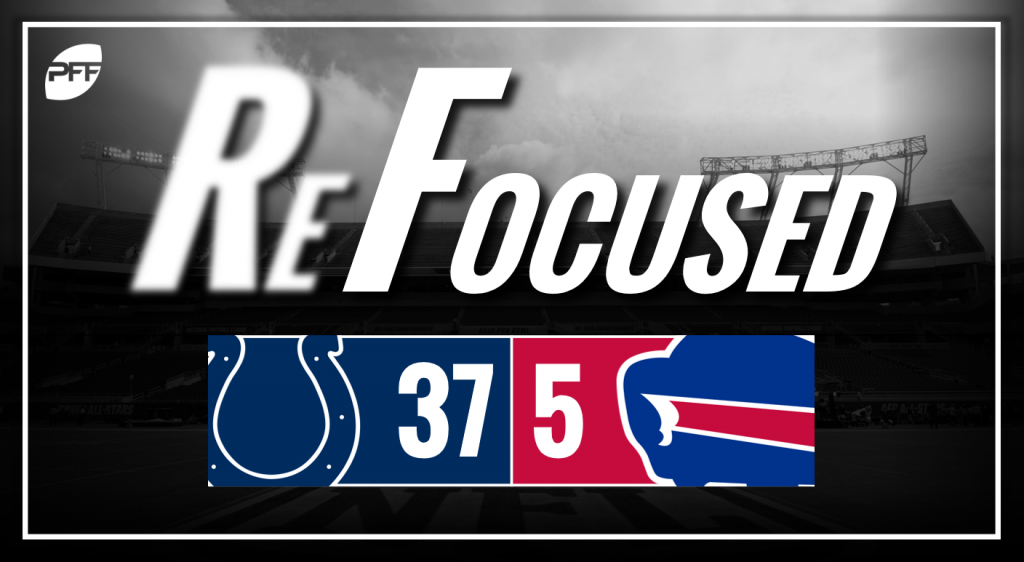 Andrew Luck didn't have to do a whole lot in this game, but was efficient with his dropbacks, getting the ball out underneath to his playmakers and avoiding the big mistakes that have sometimes plagued him this season. While he threw for four touchdowns, he didn't have to make many big throws down the field and the one time he did, he connected with tight end Erik Swoope for a score.

The running game was rolling for Indianapolis today, with Marlon Mack, Nyheim Hines, and Jordan Wilkins all averaging over 6.0 yards per carry. Both good blocking up front from the Colts' offensive line and mistakes from the Bills' defensive front ensured they had plenty of space to run through.

Whether in man or zone coverage, the back seven of the Colts were sticky throughout the game. Bills quarterback Derek Anderson struggled to identify secondary defenders and the Colts took advantage by forcing multiple turnovers.

With limited downfield effectiveness, the Bills turned to a small ball approach, one which the Colts foiled effectively. Outside of one 30-yard draw play in garbage time, the Colts did an excellent job of rallying to the ball to limit the yardage earned on dump-offs, angle routes and screen passes.

LeSean McCoy left the game after the second play from scrimmage, but the Bills still managed a strong run game. Both Chris Ivory and Marcus Murphy were effective at finding cutback lanes and making the first defender miss, as the Bills committed to the run throughout the game despite the lopsided score.

Explosive plays were few and far between, and when Derek Anderson did attack downfield, it typically meant trouble for the Bills. He put the ball in harm's way a number of times by throwing late and not reading overlapping coverages, and his skill players didn't help him out, as they were responsible for two turnovers themselves.

It was a comedy of errors for the Bills defense. After holding the Colts to three-and-outs on their first two possessions of the day, Luck & Co. rarely met much in the way of resistance. Blown coverages and blown assignments in the run game made it far too easy for the Colts to move the ball over the final 50 minutes of this game.

On a day where it's difficult to find many things that didn't go poorly for the Bills, rookie linebacker Tremaine Edmunds had an especially rough day. Edmunds was frequently out of position in both phases of the game and was the primary culprit on a number of big plays for the Colts offense. To his credit, his diving pass breakup in the third quarter was very likely the best play made by a Bills defender in the game.

Indianapolis: Bills' mistakes on both sides of the ball gave the Colts all the opportunity they needed to run away with this game.

Buffalo: Derek Anderson looked like a quarterback fresh off the streets, as too often he held onto the ball too long, misdiagnosed coverage and had communication issues with his receivers.