The Carolina Panthers defeated the Philadelphia Eagles, 21-17,  in Week 7 of the 2018 NFL season. 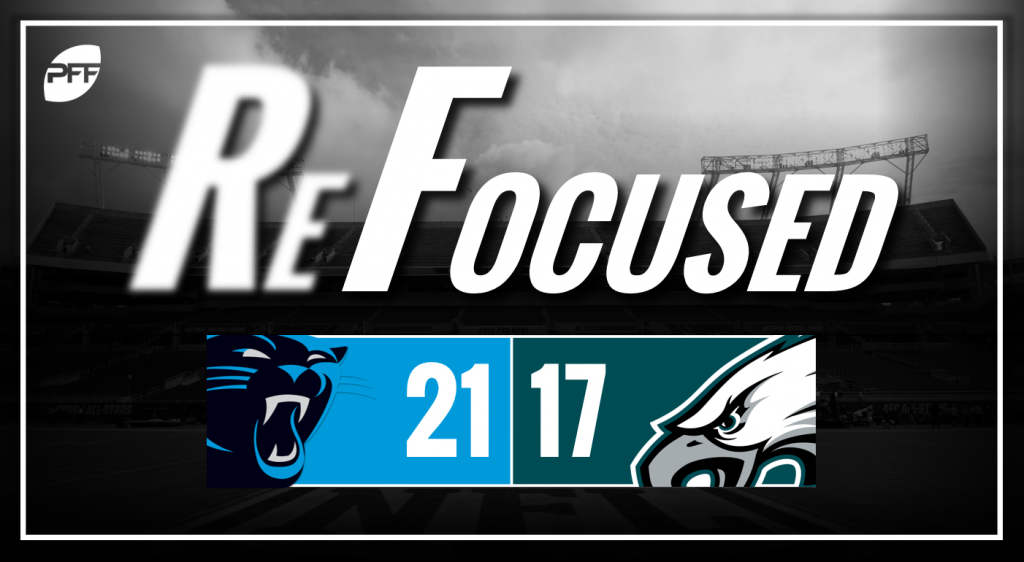 After doing next to nothing in the first three quarters, Cam Newton and the Panthers' passing offense came alive in the fourth. Newton started getting a little more time in the pocket, and with that came more accurate throws that led them to the comeback victory. His ability to avoid a sack on fourth down and still complete the pass for a first down early on in their final touchdown drive was as classic a Cam Newton play as you'll see.

The Panthers' run game was abandoned in the fourth, and for good reason. They could not get anything going all game, and it seemed like every time Christian McCaffrey and the Panthers gained any yards with a run, they immediately lost those yards back. The offensive line really struggled to handle this Eagles' front seven.

The strength of the Panthers' defense, Luke Kuechly and Thomas Davis, played at their best unit on Sunday. Kuechly and Davis were effective in all phases of the defense and consistently around the football.

The Panthers' pass-rush was stymied by the Eagles' RPO-based offense. It was tough for Panthers' pass-rushers to create disruption because of the RPOs forcing them to play run defense. The best pass-rush of the day actually came from Davis beating Jason Peters inside to force an incomplete pass on third down early in the game.

Carson Wentz had another solid game now in his fifth start of the 2018 season. For the most part, Wentz was taking advantage of easy looks given by the Eagles' run-pass option plays. Wentz did hit a couple downfield throws, one to Alshon Jeffrey and the other to his favorite target on the day, Zach Ertz. Wentz put the ball in danger a couple of times late, but neither was intercepted by the Panthers. For the most part, Wentz was very accurate and able to keep the Eagles on schedule for the whole game.

While the Eagles' offense was efficient through the air most of the day, there now seems to be enough of a sample size that they may have an issue at left tackle. Peters has been outstanding his entire career, but he has struggled this year coming back from injuries. While he is by no means a disaster, his play is a weak spot thus far through the season.

The strength of this Eagles' defense is their defensive line, and that was the case through the first three quarters. Fletcher Cox was dominating anyone who tried to block him, running them back into Newton to cause pressure. Michael Bennett also had himself a good day, as he was a force off the edge. But they seemed to tire out when the Panthers hurried up in the fourth quarter, as they barely registered any pressure on the Panthers' three touchdown drives.

This was a tough day for the Eagles' corners. Jalen Mills was giving such a massive cushion all game that Panthers' receivers were able to catch balls underneath and make him miss after the catch to gain extra yards. Ronald Darby was a little better, but he was completely fooled by Devin Funchess‘ slant-and-go that resulted in a touchdown in the fourth quarter. When the Eagles got pressure, it wasn't a big deal, but once they stopped getting pressure, the Panthers really took advantage.

This game turned around for the Panthers when they started going hurry up and negating the Eagles' defensive line pressure. Newton was far more effective when throwing from a clean pocket, and it allowed the Panthers to come from behind for the win.

The Eagles controlled the line of scrimmage for the most part on defense but were unable to replicate that on offense. The Eagles stayed committed to their rushing attack, but it was woefully ineffective. The Eagles were only able to muster 2.4 yards per carry on offense against the Panthers.