The Pittsburgh Steelers defeated the Cincinnati Bengals, 28-21,  in Week 6 of the 2018 NFL season. 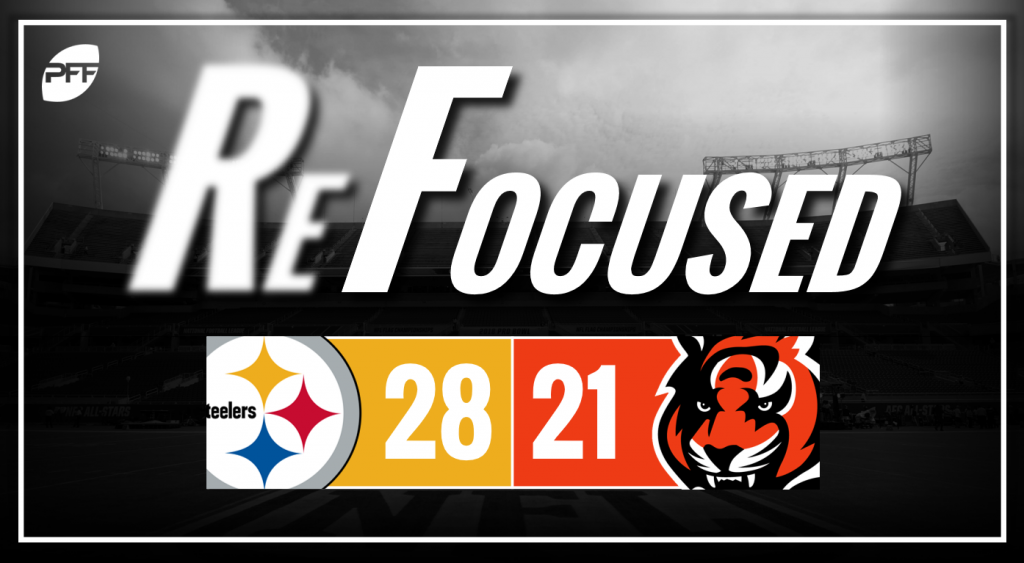 Ben Roethlisberger has gotten off to a wild start this season, and there were elements of his struggles again this week with unpunished turnover-worthy throws, some scattergun accuracy but ultimately big plays to swing the game in the Steelers' favor this time. Those plays were in his favor this time around, and though the game-winning score was a gimme from the Bengals' secondary, he did plenty of heavy lifting up to that point.

The Steelers' offensive line set a strong platform for the offense in both the run and pass game. In the passing game, they kept Roethlisberger remarkably clean for 46 dropbacks, and even when they did allow pressure, it was manageable for the most part. In the ground game, they created wide-open running lanes for James Conner, allowing him to pick up around half of his rushing yards before contact with strong showings from David DeCastro and Maurkice Pouncey to open up good running lanes straight through the middle of the Bengals' defense.

Stephon Tuitt turned in his first multi-pressure game since Week 3 against the Buccaneers and capped it off with a fourth-quarter sack of Andy Dalton to halt the Bengals' momentum and put them into a third & long that they wouldn't convert. In addition to being solid again against the run, Tuitt's pass-rush performance has been inconsistent this season, and Steelers fans will hope for more performances like this ahead.

Contested passes in the secondary did the heavy lifting for the Steelers' pass defense today, as the Steelers' pass-rush struggled to put Dalton under consistent pressure aside from Tuitt. Mike Hilton, Jon Bostic, Joe Haden and Vince Williams all got in on coverage plays to help limit the Bengals' passing game on the back end without significant support up front.

Missed tackles plagued the Bengals' defensive performance, especially from their back seven by the likes of Shawn Williams and Vontaze Burfict. The misses allowed Conner to build up a head of steam and extend plays and allowed Vance McDonald rumble for extra yards after the catch consistently.

Tyler Boyd, who continued his breakout start to the 2018 season, with strong production against an array of Steelers' defenders. As a moveable chess piece in the Bengals' offense, Boyd was able to exploit those matchups and make the plays the Bengals needed in key moments.

Joe Mixon turned in a solid performance despite the loss, which included the go-ahead touchdown in the final two minutes of the fourth quarter. Solid gains after contact and multiple missed tackles hint at Mixon's ability to carry the load when the game situation allows the Bengals to give him that volume of carries.

When it mattered, the Steelers' playmakers came up with the meaningful plays to edge the Steelers to victory and blow the AFC North wide open.

The Bengals' defense missed too many missed tackles and ultimately gave up the game on the long touchdown to Antonio Brown.