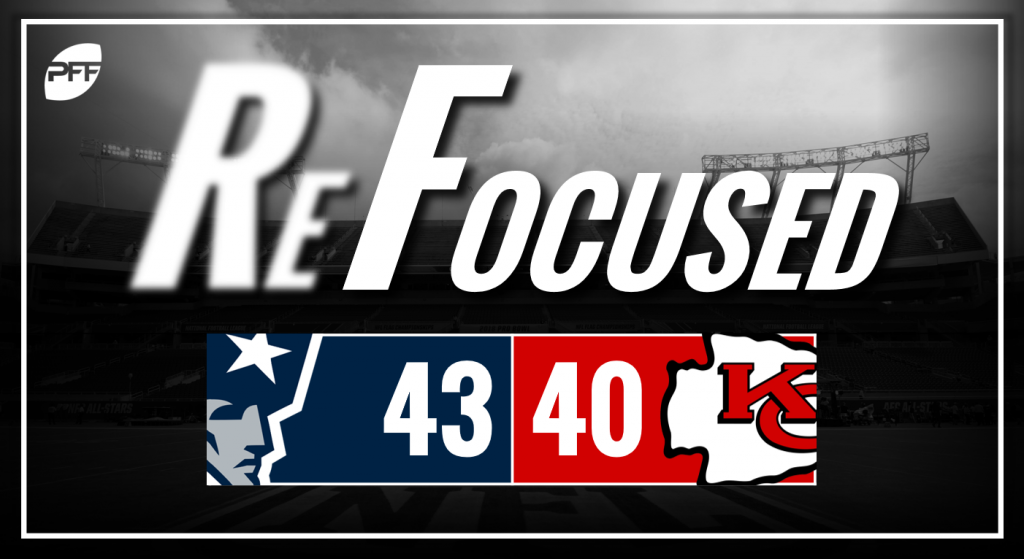 The Brady-to-Gronk connection came through again in the clutch, as Pats' Tom Brady hit star tight end Rob Gronkowski to for a 39-yard pass to put New England in field goal range to seal the win. Brady only targeted Gronkowski four times on the night, but Gronk had three receptions for 97 yards and gashed the Chiefs' defense with chunk plays. Apart from a fumble and dropped interception, Brady played well and threw for 340 yards on 35 attempts.

New England dominated on the ground, rushing for 173 yards on 38 attempts. Rookie Sony Michel led the way with 106 yards and two touchdowns. With the receiving threat of James White out of the backfield and Michel running the ball, defenses are tasked with stopping a dynamic combination going forward. White hauled in five catches for 53 yards.

With the Chiefs' high-powered offense, the New England defense knew it would have to cover downfield and make sure there was no busted coverage at any time or Patrick Mahomes would be able to exploit it. For most of the game, they were able to limit the Chiefs' big-strike ability, but the two times they busted their coverage they allowed two big touchdowns.

One of the biggest surprises for the Patriots' defense has been the play of Lawerance Guy. Against the Chiefs, he was able to make an impact by being tough to move from the point of attack and forcing the holes for Chiefs' Kareem Hunt to run through much tougher in the middle of the line.

In a shootout, the Chiefs' offense showed it was a team that can go punch for punch with the Patriots. Mahomes threw for 350 yards and four touchdowns.  However, “Showtime” had two interceptions and another dropped. Mahomes' costly mistake was throwing the interception to Pats linebacker Dont'a Hightower early in the first quarter, which gave the Patriots a touchdown that the Chiwerehere never able to overcome.

The Patriots' defense limited Travis Kelce for just 61 yards. However, the Chiefs still found a way to use their other lethal weapons, as Hunt and Tyreek Hill both gained over 100 yards receiving, and Hunt gained another 80 on the ground. While people will remember the Hill touchdown, the plays by Hunt kept the chains moving in the run game and also produced some big plays in the passing game when the Chiefs' offense needed some big plays.

The Chiefs' front seven had a tough time slowing NewEngland'ss ground game, allowing 4.6 yards per carry on 38 attempts. Linebackers at the second level struggled to get off thier blocks while the defensive line was moved around trying to slow down the New England power running game. Linebackers Anthony Hitchens and Reggie Ragland combined for 21 tackes, which indicates the number of runs that broke through to the second level.

Rookie edge defender Breeland Speaks played well while seeing lots of action,  as he recorded six tackles and a sack while also forcing the fumble on Brady. The combination of Speaks and Dee Ford is a promising combination for the Chiefs' defense as they wait for Justin Houston to recover from injury.

Once again Brady and Gronkowski came up huge in situations where it mattered most, connecting on two big plays on the Pats' final drive. If New England is able to establish the run like tonight, defenses will have a tough time slowing this offense down.

The Chiefs will go as far as the offense can take them, and against the Patriots, they showed they can match any team and led by Mahomes and Hill can strike from any point of the field. Unfortunately for the Chiefs, they were unable to get the ball back after they tied the game.