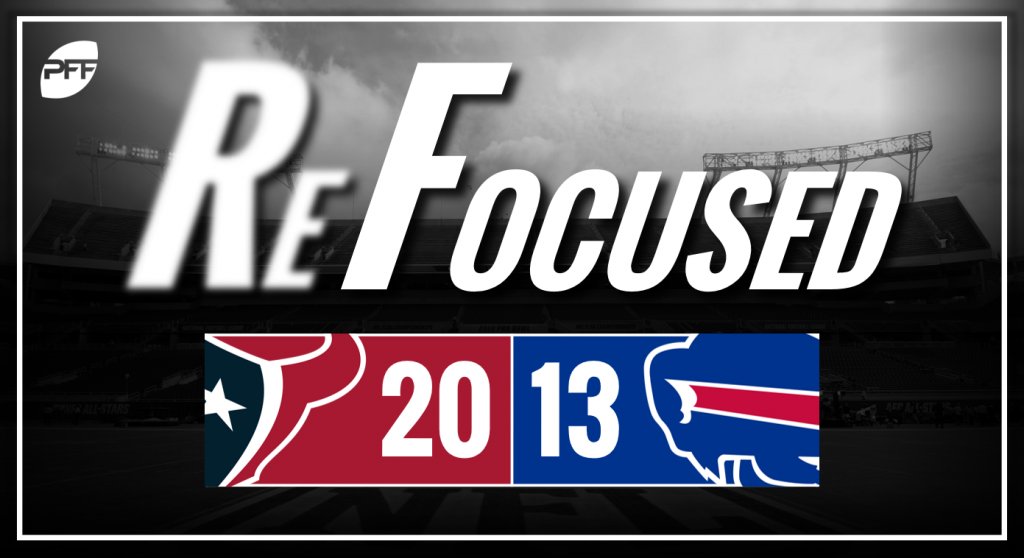 The play of the day came from Texans verteran cornerback Johnathan Joseph. Joseph read Nathan Peterman well and broke on an outside hitch route, intercepting the ball and taking it for six. Joseph and the coverage of the Texans was good all day and allowed less than 150 yards through the air.

Linebackers Benardrick McKinney and Zach Cunningham both had solid days and were aggressive flying to the ball. Like the rest of the Texans' defense, they were most impressive in pass coverage. The Bills' backs and tight ends were limited in the game, which helps out immensely when going against bad quarterbacks who struggle with downfield accuracy.

The Texans were very fortunate that they won this game, largely due to the carelessness in which Deshaun Watson took care of the football. Watson's interceptions and fumbles kept the Bills in the game and gave them a real chance to win it. Turnovers are the easiest way to lose a game, and if Watson doesn't take care of the football, the Texans won't win many more games.

The offensive line surely did not do Watson any favors on Sunday, as he faced constant pressure, mostly from the edge. Julie'n Davenport stood out on the edge as a particular weak point, giving up many pressures and keeping Watson uncomfortable in the pocket.

Peterman replaced Josh Allen mid-game due to injury, and he impressed with an accurate strike to Zay Jones in the back of the end zone at first. Unfortunately, in a tie game with the ball and a chance to take a lead late, Peterman threw an inexcusable pick-six to Joseph that gave the Texans a touchdown lead late in the game.

The Bills have struggled at their tackle position all year and came into Sunday with a tough match up against JJ Watt, Jadeveon Clowney and Whitney Mercilus. Dion Dawkins and Jordan Mills struggled containing those rushers, and that made life more difficult for the Bills' quarterbacks.

One of the marque matchups of this game was Bills second year cornerback Tre'Davious White lining up against All-Pro DeAndre Hopkins. White lined up against him for much of the game and did not give up many receptions or yards at all. The problem was is that he was called for three penalties and had a tough day due to that.

The bright spot for the Bills' defense was the edge rushers. Trent Murphy and Jerry Hughes were the most notable of the group, causing havoc on the edge and even forcing fumbles that gave the Bills a great chance to flip field position.

Although the Texans won, the poor play of Watson was the main reason the Texans were in the game. Watson needs to take better care of the ball, as he was far too careless with it in traffic and had far too many avoidable fumbles.

The key to the game ultimately came down to one terrible pass by Peterman. It was about as risky of a throw as possible with little upside. Peterman continues his struggles as a member of the Bills, and the Bills have to hope that Allen is healthy because it looks like Peterman doesn't give them a chance at this point.