The Cincinnati Bengals defeated the Baltimore Ravens, 34-23, kicking off the second full week of action in the NFL. 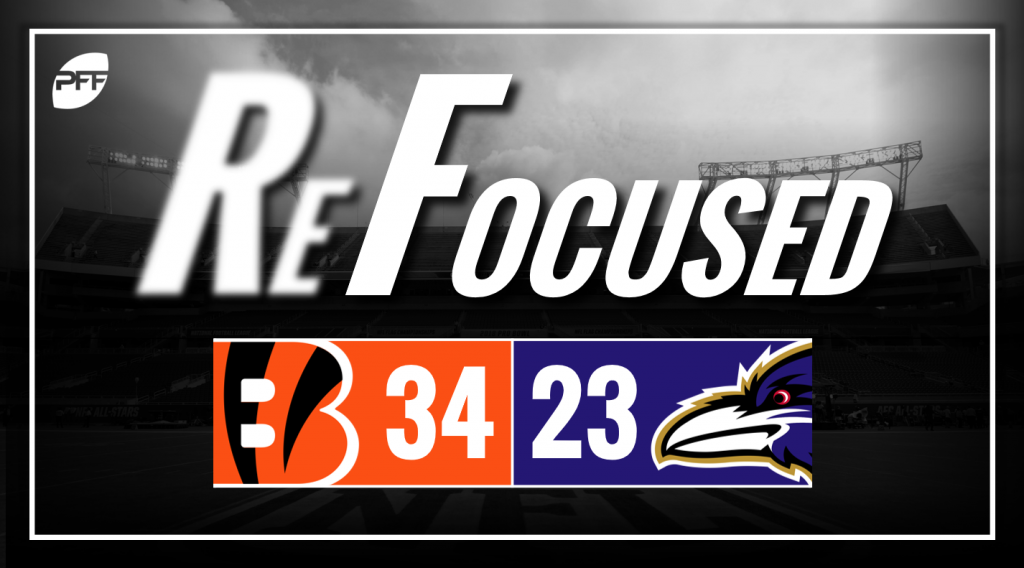 As good as the Baltimore offense looked in Week 1 against the Buffalo Bills, they were conversely as bad against Cincinnati in week 2. The Bengals were ready for the package of plays the Ravens had for rookie quarterback Lamar Jackson, which forced Joe Flacco to run an offense without all the bells and whistles – and he struggled as a result. Any points the Ravens scored were because of penalties or checkdowns to Alex Collins. Baltimore's offense is probably somewhere in between what we've seen the past two weeks, which isn't much different from what they've shown the past few years.

If there was positive to take away from this game, it's the success that Flacco had targeting his tight ends. On 11 targets, he completed eight passes for 74 yards with a touchdown and six first downs. It wasn't fancy, but they exploited matchups against the Bengals linebackers who struggled in coverage.

Terrell Suggs still has it. The veteran pass-rusher made it a long night for Bengals right tackle Bobby Hart, and when he wasn't beating Hart into the pocket, he was batting down passes at the line of scrimmage.

The Ravens defense shot themselves in the foot with penalties, committing four on third-down, three of which extended drives. Two of those penalties came in the first half, with the first one (a pass interference by Tony Jefferson in the end zone) setting the Bengals up at the one-yard line, which led to their first touchdown of the game. The second penalty, (an illegal hands to the face penalty by Terrell Suggs), extended a drive that was about to end in a field goal opportunity, which the Bengals capitalized on with their third touchdown of the game.

Andy Dalton had it working in the first half, and outside of a couple of slightly off-target throws and a contested jump ball he forced on an end zone fade, he was spot on. Dalton got the ball out quickly in the first half and peppered his receivers with catchable targets, leading the Bengals offense into the end zone four times despite three drops from his receivers.

Wide receiver A.J. Green only caught five passes in the game, but he punished Baltimore down in the red zone, demonstrating why opposing defenses shouldn't match up with him one-on-one out of the slot; at first with a crossing route and then in the second quarter with an out route.

The Ravens offensive line had their hands full against a supremely talented Bengals defensive line, which was led by fearlessly by Geno Atkins. Atkins was a force in the interior, racking up two sacks and several quarterback pressures, at times making All-Pro guard Marshal Yanda look silly. Carlos Dunlap continued his ridiculous ability to bat passes at the line of scrimmage, while Andrew Billings, Sam Hubbard, and Jordan Willis all cashed in on the action, generating plays. This unit has the makings to be special in 2018.

The Bengals secondary, which was led by cornerback  William Jackson III, took advantage of the struggling Flacco, as they hauled in two interceptions and forced another 10 to fall incomplete. If the secondary can continue to play sticky in coverage, the Bengals will be a playoff contending team as long as Andy Dalton and co. hold up their end of the bargain.

Baltimore: Flacco and the Ravens offense took nearly an entire half of football to get into a groove, and by then it was too late. Even during their spirited attempt at a comeback, Flacco needed a bit of luck along the way.

Cincinnati: Andy Dalton has shown plenty of times throughout his career that when he's on, he can compete with the best of them. That Dalton showed up in the first half on Thursday night, and the veteran quarterback was able to orchestrate the Bengals to a lead that proved to be too much to overcome.