The Jacksonville Jaguars defeated the Miami Dolphins, 17-7, in Week 16 of the 2018 NFL season. 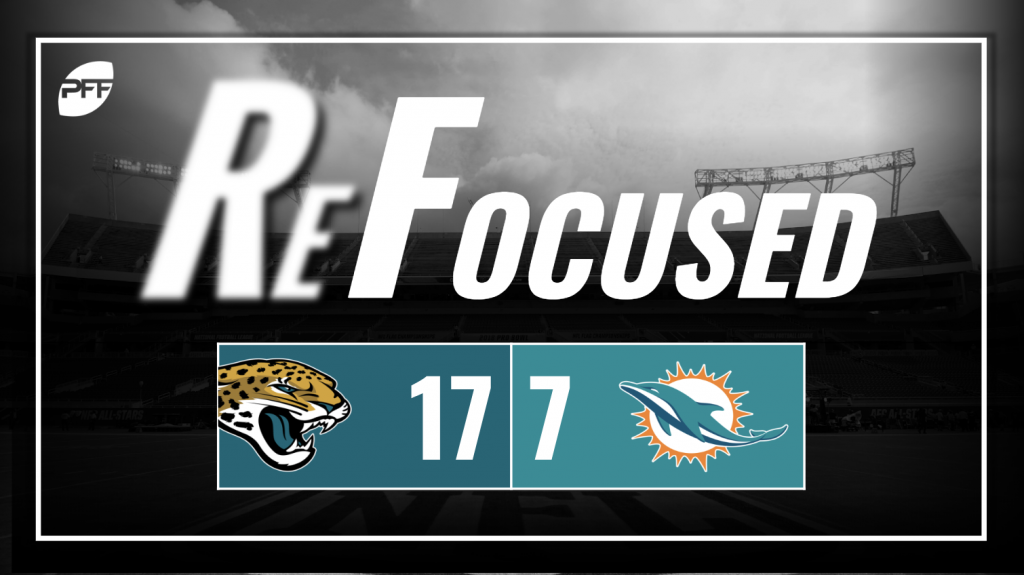 After not getting much from their starting quarterback Cody Kessler, the Jags turned to Blake Bortles. He commanded the offense well and made the biggest difference with his legs with a few good runs.

It was clear from the start of the game that the passing game would not be heavily involved in the offensive game plan. The Jaguars actually finished with more rushing yards than passing yards. Leonard Fournette was the catalyst early in the game with his bruising rushing. Carlos Hyde finished out the last few minutes with some good cuts and did not allow the Dolphins to get the ball back.

Two plays stood out the most for this Jacksonville defense that ultimately won them the game. The first play, Calais Campbell absolutely destroyed the Dolphins tight end trying to block him, chased down the back Brandon Bolden, stripped him in the backfield and recovered the ball. This put the Jaguars into immediate scoring position, which they ultimately threw away.

The other huge impact play turned immediately into points. Ryan Tannehill forced a throw with a defender hanging onto his foot into the hands of Telvin Smith, who returned the ball for a touchdown. This turned a field goal lead into a two-score lead immediately late in the game when offense was at a premium.

There were not many highlights for the Dolphins' offense on Sunday. The most notable play was a forced throw by Tannehill to his back in the flat that Smith cut off, intercepted and took it back to the house. In a game with limited scoring, Smith's pick sealed the Dolphins' fate.

With so many Dolphin wide receivers out injured, the replacements were just unable to create much separation on their own. There were little to no instances of the Dolphins taking shots down the field. They just tended to settle for underneath easy throws that did not move the needle much after the first drive of the game.

The coverage in the secondary for the Miami defense was also outstanding even though the Jaguars did not test them much. Bobby McCain and Jalen Davis stood out the most by not allowing many yards after the catch for a Miami defense that almost held the Jaguars under 100 yards passing.

Without much offense, the Jaguars threw it back to last season and relied on solid coverage combined with a dominant defensive line led by Campbell

The Dolphins' passing game was just not enough to beat the in-state Jaguars. They could not muster even 150 yards passing and threw a pick-six . The Dolphin offense only  put up as many points as they themselves let up.