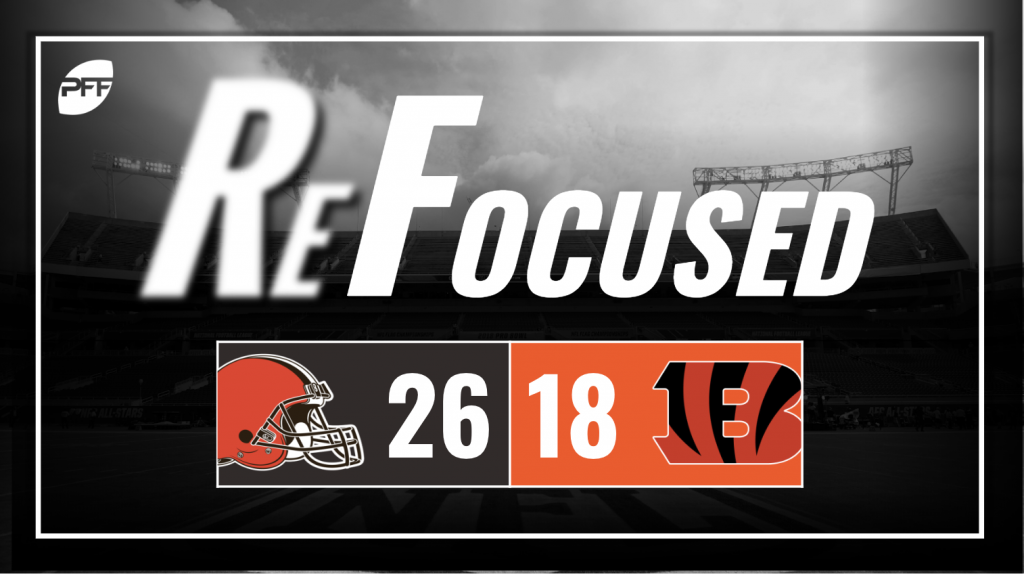 Myles Garrett again showed he is the best player on the Browns' defense, as he was too much of a force against Cordy Glenn. While Garrett didn't record a sack, he did record a hit and was causing issues for Bengals' Jeff Driskel all game long. Garrett was simply too quick on the outside, and when Glenn would jump out to play against speed, Garrett countered inside and get to Driskel.

Opposite of Garrett is rookie Genard Avery, who has shown a lot of ability coming forward in the run game and as a pass-rusher. The biggest issue over the course of the season has been Avery in coverage. Early on he was used very little in coverage, and the Browns used him less in coverage this week as they have over the previous few weeks, but Avery made plays in those limited snaps. He broke up a pass that he nearly picked off, and made quick tackles in the run game. He also recorded a sack as he got the edge around Bobby Hart.

Baker Mayfield was electric from start to finish despite not being on the same page with the receiver on a few passes early in the game. Mayfield was arguably better this time around than he was against the Bengals in their first matchup in which he picked apart the Bengals' defense. He did the same but added a few more big-time throws and over 250 yards.

The entire offense was clicking on all cylinders with the offensive line, giving Mayfield plenty of time to throw. Mayfield's receivers also made some excellent plays. Rookie running back Nick Chubb is also setting rookie records for the Browns, as he surpassed arguably the greatest running back in NFL history for rookie rushing yards (972 to 942) on fewer carries (183 to 202). Chubb will be overshadowed by the work of Mayfield, but his play has been spectacular this season.

The Bengals' offense struggled in the first half, as they only averaged 1.8 yards per play. In the fourth quarter, Driskel and the Bengals finally managed to get some points on the board and at one moment looked like they could mount a comeback. Driskel's best passes came near the end of the game, where he hit Alex Erickson down the sideline for 28 yards and then the touchdown pass to C.J. Uzomah, where he had to touch pass it over the defender to the spot where only Uzomah could make the play.

In a game where the Bengals were down two of the better recievers on the team, John Ross really struggled to get the ball, as he only caught one pass on a handful of targets. That one catch was a nice reaction to Driskel scrambling to get open for a touchdown. But outside of that play, Ross has really struggled all season and isnt looking anything like the top-10 pick the Bengals thought they were getting.

There weren't many bright spots on the Bengals' defense, but cornerback William Jackson made a couple of nice plays in coverage. He made a tackle short of a first down on a third down pass to Jarvis Landry and forced Breshad Perriman out of bounds on a go-route.

Geno Atkins has been excellent all season long but was held in check by the Browns' interior offensive line. He generated some pressure but didn't have the impact normally expected from the All-Pro defensive tackle.

Mayfield is tough to stop when OC Freddie Kitchens is scheming it up and Baker is executing it. When his accuracy is on point, like it was today, Mayfield and the Browns can score with the best of them; it was too much for the Bengals to overcome.

The first three quarters for the Bengals was a struggle, but they mounted a comeback and had a chance to have the ball with a couple of minutes left in the game in the fourth quarter but were unable to stop the Browns when they needed it the most. The Bengals on offense kept the training wheels on for Driskel, and only when they tried to make plays downfield did the offense look likely to be of any threat.