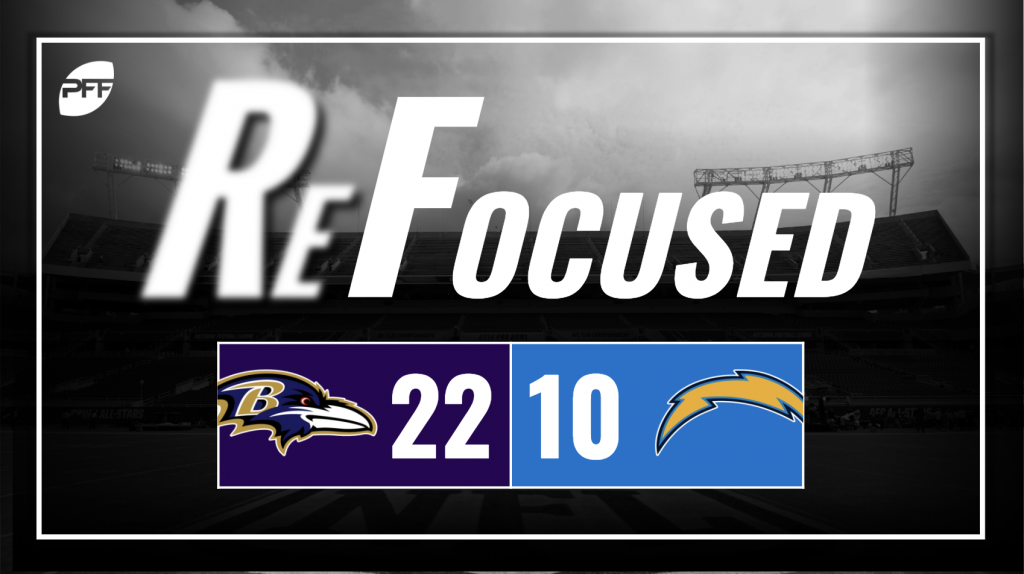 More than once, the Ravens ran the ball on 3rd and 10-plus in the first half. Lamar Jackson threw a beautiful deep post route in stride to rookie tight end Mark Andrews, and with a stiff arm of Jahleel Addae, Andrews streaked for a 68-yard touchdown.

Kenneth Dixon fumbled on the Ravens' first play of the second half when Darius Philon ripped the ball out of his hands as he spun for extra yardage. The turnover gave the Chargers the ball in the red zone and quickly led to a touchdown.

We at PFF often say that coverage is more valuable than pass-rushing, but this game was won up front by the pass-rushing unit of the Ravens. Yes, the secondary made some great plays on the backend to seal the game, but Terrell Suggs and company abused the Chargers' offensive line all game long.

After entering the game ranking near the bottom of the NFL in takeaways, the Ravens' defense burst to life with three turnovers, all at critical times. This is a unit that has the makings of a Super Bowl-caliber defense, as it typically doesn't rely on turnovers to make stops, which we all know needs some luck to happen.

Chargers safety Adrian Phillips quickly diagnosed a quarterback draw on 3rd and 10 and limited Jackson to only a three-yard gain, forcing a field goal.

Derwin James had a nice pass break-up of a 3rd-down crossing route to Hayden Hurst, forcing the Ravens to punt. Jackson threw the ball a bit behind Hurst on the play, but James still made a stellar play to force the incompletion.

Philip Rivers lives in a perpetual state of pressure that when he actually has a clean pocket to throw from, he doesn't know how to handle it. The Chargers' offensive line had a dreadful performance, as they simply couldn't handle the exotic looks and stunts the Ravens' front seven deployed.

The tipping point for quarterbacks is typically at 40%. That is if they are pressured greater than 40% of their dropbacks, bad things usually happen for the signal-caller. No QB is immune to it. Rivers is no exception, as he was seemingly under pressure from the first snap of the game until the last. He threw a couple of big-time throws but was undone by his two interceptions that bookended the game.

Jackson & Co. limited mistakes on the offensive side of the ball, while the Ravens' defense played their part in pressuring Rivers and making big plays in clutch moments.

This game was decided up front. The Chargers' offensive line had no answers for the Ravens' pass-rush.