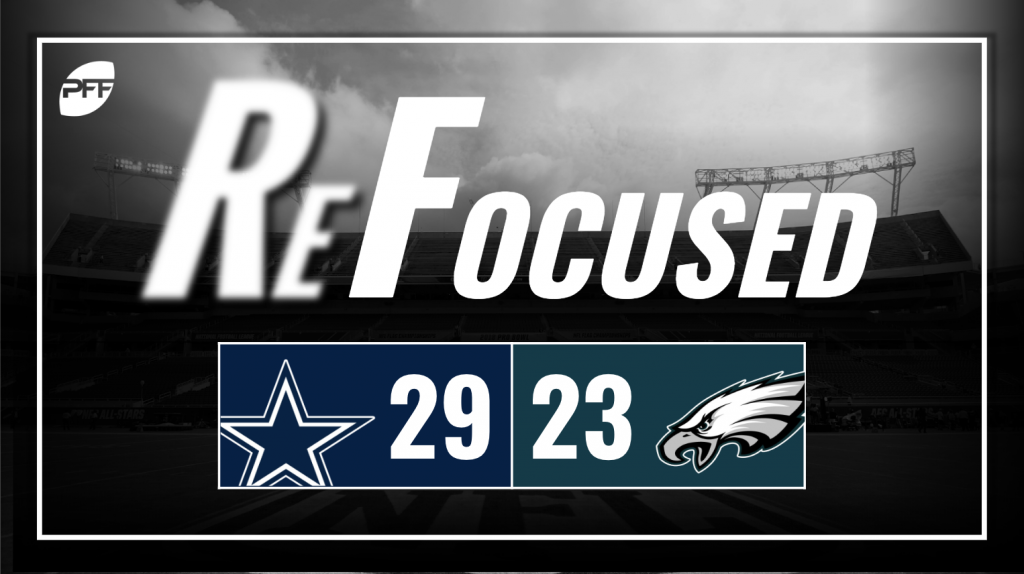 Randy Gregory and Demarcus Lawrence led the way for the Cowboys' pass-rush. Gregory & Lawrence got plenty of pressure through the Eagles' vaunted tackles with Gregory unfortunate not to mire the Eagles in the shadow of their own goalposts late on with the officials calling the Eagles' final drive very tight. The Cowboys gave up yardage and scores late, but it was the mark of another strong Cowboys' performance that ensured the Eagles were always chasing the game.

The Eagles went after Leighton Vander Esch in coverage in a way few teams have managed during the first rounder's rookie season. Darren Sproles beat Vander Esch in coverage with crucial contributions on a pair of game-tying drives late in the third and fourth quarters with a broken tackle leading to the score that pushed the contest to overtime. Vander Esch continued his fine form in coverage, but this was a performance to realize that everyone gets got in coverage at some point, even rookie phenoms.

Amari Cooper was fantastic, catching 10 of his 13 targets and converting nine of those into either a first down or touchdown on his way to over 200 yards and three scores. And while it was a touch lucky for the Cowboys' offense, Cooper made a heads up play to track the ball off of a deflection by Rasul Douglas to haul in the game-winning touchdown in overtime.

Dak Prescott filled up the box score with some gaudy numbers, throwing for over 450 yards and completing 78 percent of his passes, but his actual performance was a bit more up and down. Dak made some excellent throws downfield, including the two fourth-quarter touchdowns to Cooper. However, he also put the ball in harm's way on multiple occasions, overthrowing a pass for an interception and misreading coverage on another while also losing a fumble.

The Eagles' offense lumbered for much of the game but sparked to life with the game on the line, in large part thanks to the work of rookie tight end Dallas Goedert. The second-round pick pushed the Eagles into the red zone on their first game-tying drive and capped it off with an excellent double move to split the Dallas defense. He was unfortunate not to tie the game a second time on a dubious pass interference penalty as he tried to go play-for-play with Amari Cooper, but when the Eagles needed a start, it was Goedert who got them going.

It took Carson Wentz a long time to get going with the combination of the Cowboys' pass rush and coverage units keeping a lid on the Philly offense until crunch time. Wentz came alive late, though, with production short and intermediate as well as a big play down the sideline on the game-tying drive with the only thing that you could mark against it was that it led his receiver out of bounds just the wrong side of the pylon. Ultimately, though, after their slow start, it was possibly fitting that the Eagles were persistently playing from behind and never got the shot to finish the comeback.

Fletcher Cox was excellent as usual, particularly as a pass-rusher where he terrorized the interior of the Cowboys' offensive line to the tune of two sacks and a bevy of additional pressures and was about the only Eagles' defender to consistently bother Prescott in the pocket.

Cooper saw action against just about everyone in the Eagles secondary, but Sidney Jones and De'Vante Bausby took the brunt of the punishment, and neither had an answer for the Cowboys' top wideout throughout the game.

Dallas dominated the play count and time of possession, eventually wearing down the Eagles' defense to score 20 of their 29 points in the fourth quarter and OT.

The Eagles chased the game well in the final quarter but were glacial in the opening three quarters on offense and made to pay for that lethargic start in the end, never giving themselves a shot at victory.