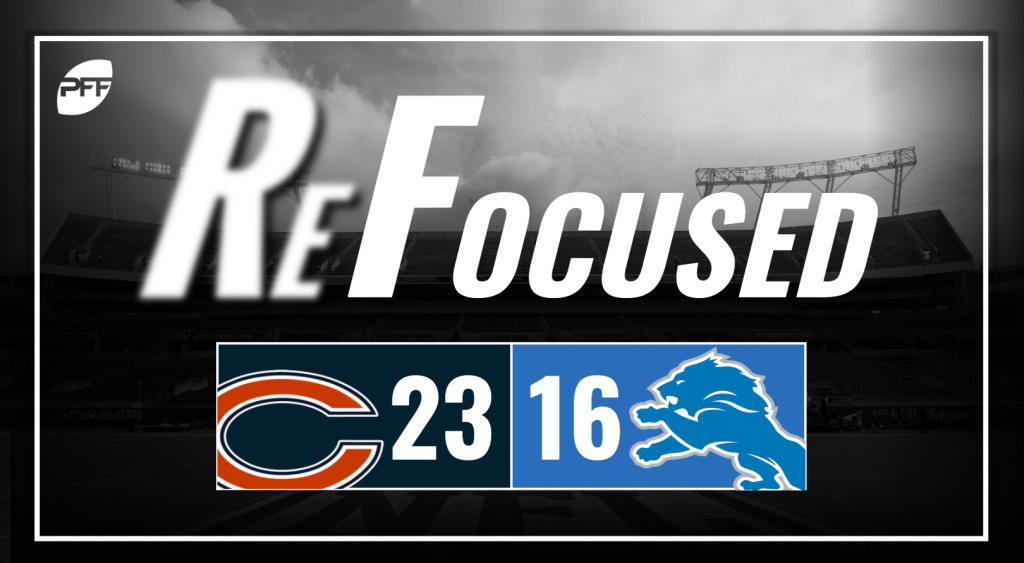 The big question was how would Chase Daniel fair. Well, he answered that emphatically with a performance that while not flawless, did the main thing asked of him; avoid putting the ball in dangerous areas. In some respects, it was the opposite of what you'll get out of Mitchell Trubisky when he returns, but his good decision-making was a huge factor in why the Bears were able to win.

It's normally not a good thing when a lineman gets some press. But after pulling out and pushing Darius Slay backwards, James Daniels was able to help Tarik Cohen pick up enough yards for a first down to put the game on ice. It was an exclamation point on a strong game for Daniels, particularly in pass pro where it was Bryan Witzmann who had the most consistent struggles. Daniels is enjoying the most consistent stretch of play over his young career, and it's a big part of an improved Bears line.

You just can't keep Eddie Jackson out of the headlines. He's playing as well as any safety in the league right now and emphasizing that with a knack for making big plays that define games. His pick-six was the pivotal moment in this game and, much like his other interceptions have done all season, added the cherry on top of his all-around excellent play.

While Khalil Mack may be the star of this defense, it's impressive that even without him playing his best the team still won, and on a short week. Mack had one highlight reel hit but was largely a step late to being in the right spot to influence Matthew Stafford, as Taylor Decker had the better of their contest.

It's good to see Ezekiel Ansah bringing the quarterback down so often, with the former first-round pick grabbing some big wins of Charles Leno rushing the passer. As has been the case through most of his career, Ansah maximized his opportunities to turn pressure to sacks, with the end result being gaudy sack numbers but little in the way of consistent pressure.

It looks like we're going to see more of Mike Ford, as he showed some feistiness in the run game and did a great job on an out and up the Bears had been setting up all game. Countless out routes to Taylor Gabriel were designed to get the rookie to bite, but he maintained his discipline and was able to match the speedster Gabriel down the sideline in one of the most impressive coverage plays of the game.

One play can define a game and ultimately the horrible pick six Stafford threw turned a potential march for victory into a desperate chase to avoid defeat. While much of the talk pre-game was how Daniel would perform, you'd be forgiven for thinking it was Stafford making only his third start in the NFL, as he threw three interceptable passes (one bounced off the hands of Danny Trevathan and into the arms of Nick Bellore). It's been tough sledding for the former first overall pick recently and not the kind of consistency his head coach will want to be seeing.

The right guard spot continues to be a problem for Detroit. Kenny Wiggins was worked over in the run game by Akiem Hicks. He was noticeably beaten twice for quick tackles for short gains, but there were other plays away from the tackler where he struggled to display control over the big-bodied Bears front.

Bad decision-making by the quarterback put the ball in harm's way, taking points off the board and putting it on for the opposition.