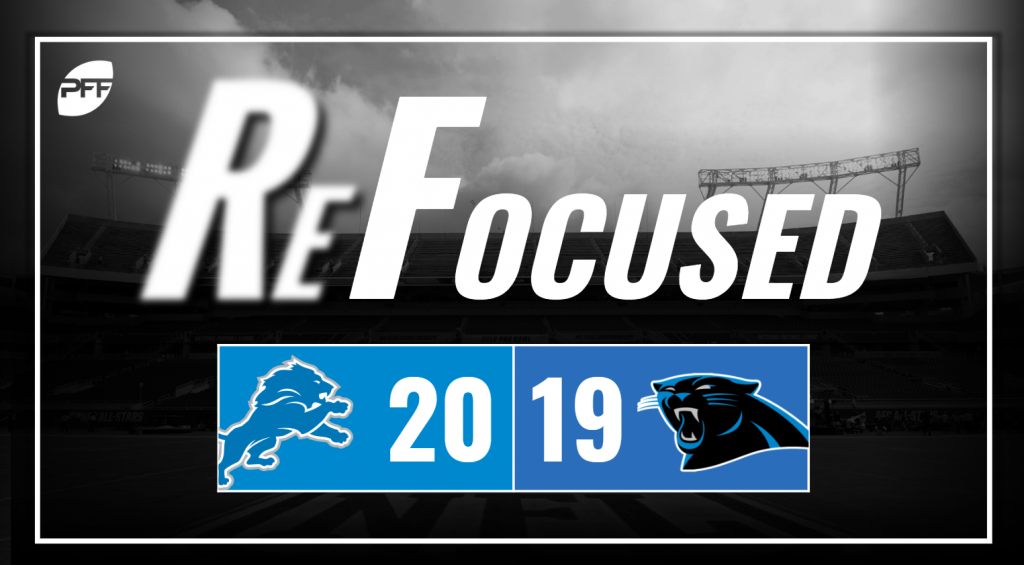 Lions' Ricky Jean Francois was a factor inside against the run, and Damon Harrison also made some plays in run defense.

Ezekial Ansah was a force rushing the passer, while Darius Slay was a busy man in the Lions' secondary with some breakups.

Without Marvin Jones on the field, Kenny Golladay stepped up and provided Detroit with legitimate WR1 play against the Panthers. Six of Golladay's eight receptions went for either a first down or a touchdown, and he made a few contested catches on the afternoon as well, including a ridiculous grab in the front corner of the end zone to put Detroit up for good midway through the fourth quarter.

Detroit's offense was just flat out better when Kerryon Johnson was on the field against Carolina. The rookie displayed the total package in Week 11, using quick feet and good burst to break multiple tackles in the run game. He caught both his targets as a receiver and was solid in pass protection (he was beaten on one pass pro snap but didn't surrender any pressure).

Cam Newton had an interesting day. He made some nice throws down the field, showcasing his big-time arm in bringing Carolina back. He also put too much juice on the ball at times and overthrew open receivers.

There weren't many standouts for the Panthers' defense in this one, but Bryan Cox Jr. had a solid game, particularly in run defense. Cox had two really nice plays in run defense – one in the second quarter and one in the third – where he was able to bull rush his way into the backfield from the edge, both times tackling the running back for a loss.

Carolina's entire pass-rush struggled to penetrate Detroit's offensive line in Week 11. Matt Stafford took a sack halfway through the fourth quarter on a play where Julius Peppers was able to get by Rick Wagner on the edge, but that was the only time all afternoon that Stafford was taken to the ground. They did hurry Stafford on a handful of plays, but it was a fairly quiet day from the Panthers' pass-rush all in all.

Detroit didn't have any turnovers in this one, and they made some timely plays, with Golladay coming up big late.

Carolina's offense made plays late, but the slow start was too much to overcome.