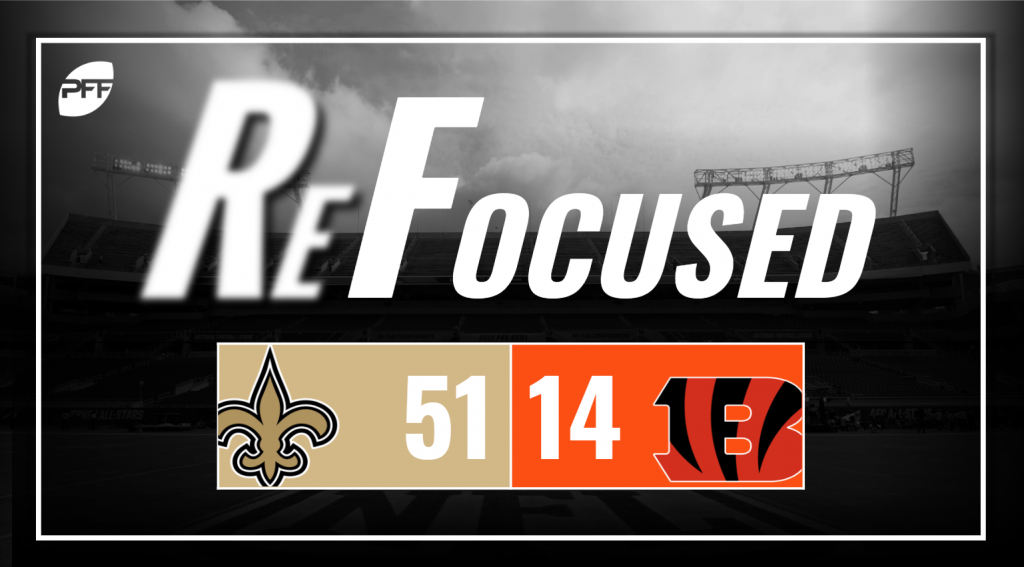 The Saints' offense went into Cincinnati and laid 51 points on the maligned Bengals' defense. They dominated on the ground and had a nearly 2:1 time of possession advantage. The ground game accumulated 244 yards on 47 carries, more than five yards per carry. The combination of Alvin Kamara and Mark Ingram accounted for 160 yards on 25 carries.

Drew Brees was nearly perfect, ending with a 150.4 quarterback rating and only three incompletions, one of them being a throwaway. Two of his touchdown throws were to Michael Thomas, who caught all eight of his targets for 70 yards.

The Saints' defense only had to play 20 minutes, as New Orleans' offense completely controlled the clock. Marcus Williams had an interception with 20 seconds left in the half when the Bengals were in scoring position and returned it all the way to the inside the Bengals' 20-yard line. Then, the Saints managed to score themselves at the end of the half.

The Saints' pass-rush was consistently beating the Bengals' offensive line, giving Andy Dalton little room to step up and give his wide receivers a chance.

The Bengals will want to forget about this game as soon as possible, as they were outmatched from the start. The biggest positive on offense was the performance of Joe Mixon. He totaled 61 yards on 11 carries, as he looked quick to read his offensive line blocks to maximize his yardage.

Without A.J. Green, the Bengals needed another wide receiver to step up. John Ross flashed some of his speed which made him the top-10 pick last season. Admittedly, it was in garbage time and Jeff Driskel was under center, but he did burn a back up cornerback for a 37-yard gain.

The Bengals' defense has had a rough stretch the past four games, and it continued against the potent Saints offense. New Orleans converted 60% of its third downs and owned the line of scrimmage, rushing for over 240 yards. Linebacker Jordan Evans finished with nine tackles but was often sealed off at the second level.

Cincinnati didn't generate much pressure at all and finished with no sacks. After losing Carl Lawson for the season, the Bengals will be looking for someone to step up be able to generate some pressure against opposing quarterbacks, or this unit could be in for a long remainder of the season.

The Saints' offense owned the trenches in both phases, rushing for over 240 yards and not allowing a sack.

The Bengals managed just over 20 minutes of possession, as they were utterly overwhelmed with the Saints. The Bengals' defense couldn't stop the Saints once in the game, as the Saints scored on every possession except the last drive as they ran the clock out.