Battling for the top spot in the AFC West, the Kansas City Chiefs blew the doors off the visiting Oakland Raiders, besting their rival, 26-15.

Kansas City running back Kareem Hunt displayed a bit of a resurgence in the contest, carrying the ball 25 times for 116 yards and a touchdown. And, of course, wide receiver Tyreek Hill had his fair share of highlight plays, as the savvy speedster recorded four receptions for 75 yards.

Quarterback Derek Carr and the rest of the Raiders' offense continued to put forth a flat, uninspiring attack, which kept the unit off the board up until the final nine minutes of the fourth quarter. Carr completed just 21-of-41 passes for 211 yards, one touchdown and two interceptions.

Smith was alright in this one, but he certainly wasn't the primary reason Kansas City went out and made easy work of the Raiders this week. Smith completed 14-of-19 passes on balls that traveled fewer than 10 yards in the air and connected on 6-of-11 passes that traveled 10 yards or further. Smith struggled when the Raiders were able to land pressure, completing just 5 of 11 passes for 103 yards and an interception on throws coming under pressure, good for a 41.1 passer rating.

Wilson hauled in five of his six targets and earned 24 of his 72 yards after the catch in Week 14. Alex Smith and Wilson have been a solid connection all season and Sunday's results against Oakland were more of the same: Smith had a 138.7 passer rating on his 30 targets to Wilson in the first 13 weeks of the season, he had a 116.7 passer rating when targeting Wilson against the Raiders.

The 2016 No. 37 overall pick has more than outplayed his draft position, as he continues to impress in his second season. A disruptive force against the Raiders' interior offensive line, Jones racked up five total pressures, including a sack and a hit. He was also a force in run defense, recording a tackle for loss to earn a run stop percentage of 12.5.

In just his second game of the season, Terrell made his presence known after a solid outing last week. Targeted three times, Terrell allowed just one catch for 18 yards while notching an interception and a pass defense to record a 15.3 passer rating allowed. Strictly playing in pass situations, Terrell played 39 snaps with 36 of them coming in coverage.

Sunday was a dreadful day for Crabtree, who needed to step up with Amari Cooper going down early in the game. Despite getting targeted 13 times, Crabtree hauled in just eight catches for 68 yards, dropping two of them. He averaged just  1.74 yards per route run and recorded a 20-percent drop rate. He also had a catch-and-run called back due to an offensive pass interference penalty and was flagged for two more penalties on the day.

It wasn't as terrible a day as the stat line would suggest for Carr, as his receivers dropped three passes, including the game-deciding interception. Unable to connect on any of his seven deep passes, Carr had to rely on a short, quick passing game to attack a Kansas City defense that allowed Jets QB Josh McCown to throw for 331 yards the week prior. The Raiders' offensive line did a fine job protecting Carr, as he was pressured on just 12 of his 44 dropbacks but connected on just three of his nine attempts for 35 yards.

Vanderdoes tallied two pressures on just 12 pass-rush snaps (both hurries) against Kansas City, and the rookie out of UCLA ranked second on the Raiders' defense with an 82.7 run-defense grade. The third-round pick collected one stop on the afternoon, marking his fifth consecutive game with a stop.

The undrafted rookie had arguably his most productive game of the second-half of the season in Kansas City this week, ranking second among Oakland defenders in terms of overall grade. Morrow had an average day in coverage, and he coupled that with a good showing in run defense to finish just below the 80.0 mark. The rookie out of Greenville finished the day with five stops to lead both defenses, and he's now earned multiple stops in four consecutive weeks. 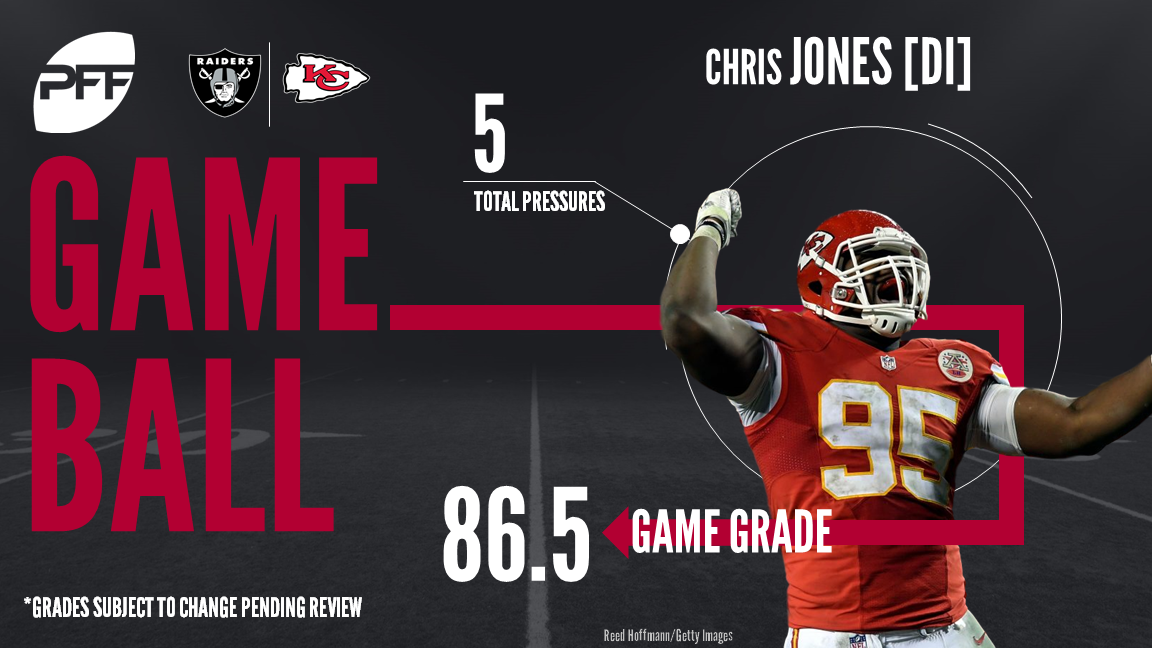