QB Dak Prescott was not asked to do much, as he had only 22 passing attempts and five rushing attempts compared to 37 rushing attempts by other Cowboys on the night. Both running backs Alfred Morris and Rod Smith found the endzone, and Prescott tossed two scores as well

QB Kirk Cousins could not rely upon his run game (only 2.9 yards per carry as a team) nearly as much and was forced to put up 37 passing attempts. He threw two touchdowns but also threw two interceptions and fumbled twice.

The Cowboys defense, particularly edge defender DeMarcus Lawrence, had a productive night rushing the passer, as they sacked Cousins four times and got many more pressures overall. With that, we give you our PFF-exclusive takeaways from the contest for each team.

The Cowboys receiver played arguably his best game of the season, he didn't necessarily fill up the stat sheet but made important catches at critical times of the game. Bryant was targeted seven times, catching five for 61 yards, including a spectacular touchdown catch on which he was interfered with. Bryant has now caught 58 of his 103 total targets on the season and forced 12 missed tackles after the catch.

Tyron Smith was the highest-graded lineman on a unit that showed it's ability to wear down opposing defenses. The Cowboys front kept QB Dak Prescott clean throughout most of the night, only allowing him to be pressured on nine of his 27 drop-backs. They also imposed their will on the Redskins front seven, leading the way for 182 yards on 42 carries on the ground. Four of the five Cowboys linemen graded above 80.0 in run blocking

It was a breakout performance for the rookie as he got the start, saw his highest snap count since Week 1, and performed admirably. Awuzie was targeted three times in coverage on Thursday night and didn't surrender a single catch while notching one pass breakup. The second-round pick lined up as the left conerback on 48 of his 53 snaps.

Irving has enjoyed a breakout season so far in 2017 and Thursday night's performance against Washington checks in as one of his best. The third-year interior defender tallied four pressures on the night (two hurries, a hit and a sack) and he batted a pass that landed in Anthony Brown's hands for Dallas' second interception of the night. Irving's pass-rush grade for the season is now up to 86.0, the eighth best among interior defenders.

Cousins had a decent game throwing the ball, he completed 22 of 28 passes that traveled fewer than ten yards in the air and he was the victim of three drops by his receivers, including one off the hands of Jamison Crowder that resulted in his first interception on the night. He put the ball on the ground twice though with two fumbles – with Washington fortunately recovering one – and that is simply just something he cannot do.

Scherff had another nice game in what has been a standout season for the third-year pro. He gave up just one pressure for the night (a hurry), just his second pressure surrendered over his last three games, and he led Washington with a 79.4 run-blocking grade. Scherff now ranks fourth among guards for the season with an 87.5 overall grade and at 90.5, he's one of just two guards to own an elite run-blocking grade.

The third year player out of Utah State has done an admirable job filling in due to injuries. For two straight weeks Vigil has played well, and tonight he recorded two stops against the Cowboys which led to a run-defense grade of 79.7 Thursday night, second behind Ryan Kerrigan's 83.8 run-defense grade for team lead. Vigil is quickly approaching his career high in snaps played, with the most being 145 his rookie year. He currently sits at 93 and will eclipse that quickly if he's asked to fill in more down the stretch.

On a night where the Redskins struggled to generate much pressure against the Cowboys quarterback, Stacy McGee was the most effective of the unit on that front. McGee generated two pressures on the way to a pass-rush grade of 79.4, he was only one of two Redskins to record a pass-rush grade above 70.0. McGee is known more for his run stopping ability than skills as a pass-rusher, as he came into tonight's game with only five pressures on the year. 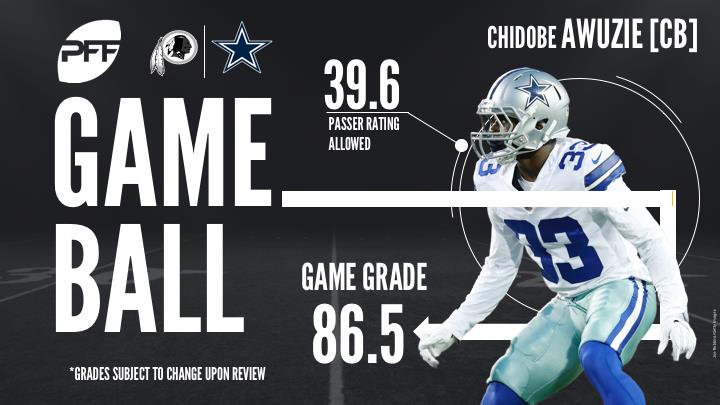