CHICAGO, IL - OCTOBER 22: Eddie Jackson #39 of the Chicago Bears scores a touchdown on an interception against the Carolina Panthers in the second quarter at Soldier Field on October 22, 2017 in Chicago, Illinois. (Photo by Jonathan Daniel/Getty Images)

The Chicago Bears used an impressive defensive performance on Sunday to defeat the visiting Carolina Panthers, 17-3. Chicago QB Mitchell Trubisky attempted just seven pass attempts, completing four of them for 107 yards in the process but it was the Bears defense who put up the points in Chicago.

In fact, it was rookie defensive back Eddie Jackson who single-handledly outscored Carolina, as he returned both a fumble and an interception for touchdowns. His 75-yard scoop and score in the first quarter and 76-yard pick-six were good enough to hold off QB Cam Newton and the Panthers.

Neither offense seemed to get on track enough to sustain much of an attack, as Bears RB Jordan Howard carried the ball 21 times for 65 yards. On the other side of things, the Panthers rushing attack of Jonathan Stewart and Christian McCaffrey was bottled up, totaling just 58 yards on 21 carries.

Trubisky only dropped back to pass 13 times and he completed 4 of his 7 pass attempts for 107 yards, including a deep post route to Tarik Cohen. Trubisky was sacked 4 times, one of which was charged to him. The Bears were never pressured to throw the ball down the field thanks to their defensive effort.

Although yielding a sack in the fourth quarter, Sitton played consistent on the day and showed good athleticism with several nice reach blocks on Bears outside zone plays.

It didn't matter if the Bears' asked him to rush the passer, drop in coverage, or stuff the run, Trevathan did it all. He recorded a sack, a hit, two hurries, a batted pass, and he notched three defensive stops. Not to mention his interception as he allowed three catches on four targets for just 19 yards.

While his counterpart Eddie Jackson stole the show with his two defensive touchdowns, Amos made several plays of his own. Targeted on four occasions, Amos broke up a pass and allowed two catches to go for -2 yards. On top of his excellent work in coverage, Amos amassed six tackles, two assists, and two defensive stops.

While the stat line is unseemly, as Cam finished with 2 interceptions and a fumble, only one of those turnovers was truly his fault as a defended pass was deflected in the air for a pick six and the fumble dropped by rookie Curtis Samuel was also returned for a touchdown. Under pressure on 53.5 percent of his dropbacks, Newton completed just 8-of-15 for 100 yards but there was the one egregious interception. Against the third best defense coming into the week, Cam attempted just three deep passes, completing one for 37 yards.

Kalil struggled to block Bears edge defender Pernell McPhee and Co., as the former Minnesota Viking surrendered 7 total pressures including a sack and a hit. He also struggled in run blocking, as Panthers' rushers gained just 14 yards on 7 carries when running left.

Short was stout on the inside for the Panthers. Short generated a sack and a hurry rushing the passer and also had 2 stops in run defense.

Addison was productive, throwing off Trubisky's timing with a sack and hurry of his own. Addison also produced three run stops as the Panthers defense played well in the loss. 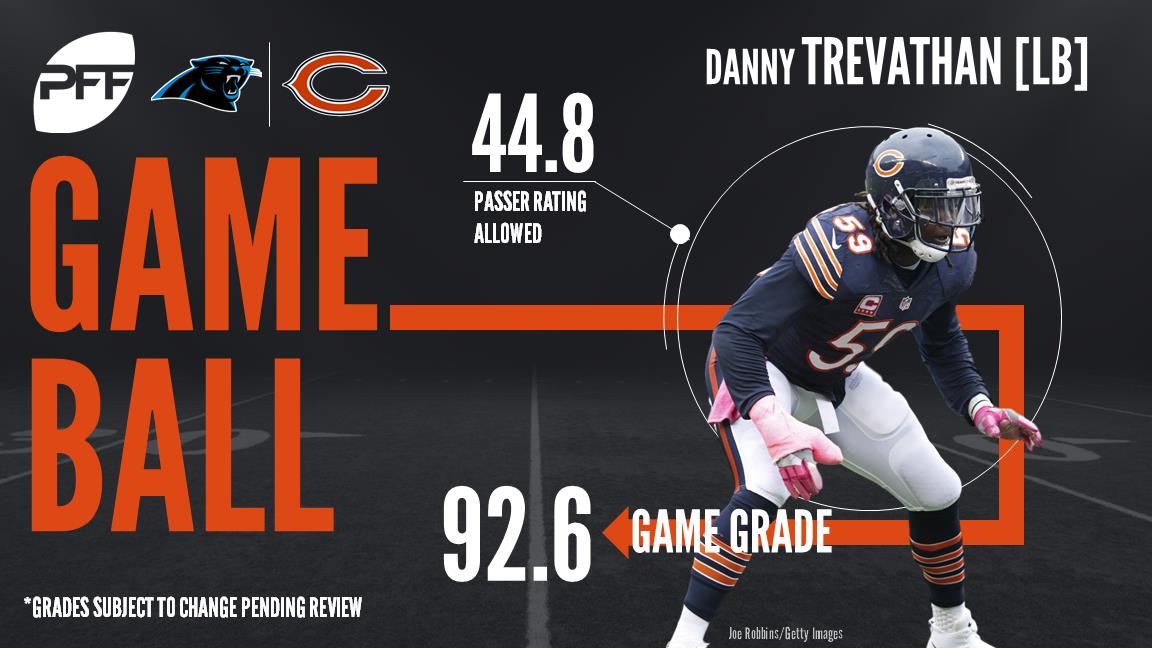