The Houston Texans defeated the San Francisco 49ers on Saturday night, 16-13 continuing the second full week of preseason action in the NFL. 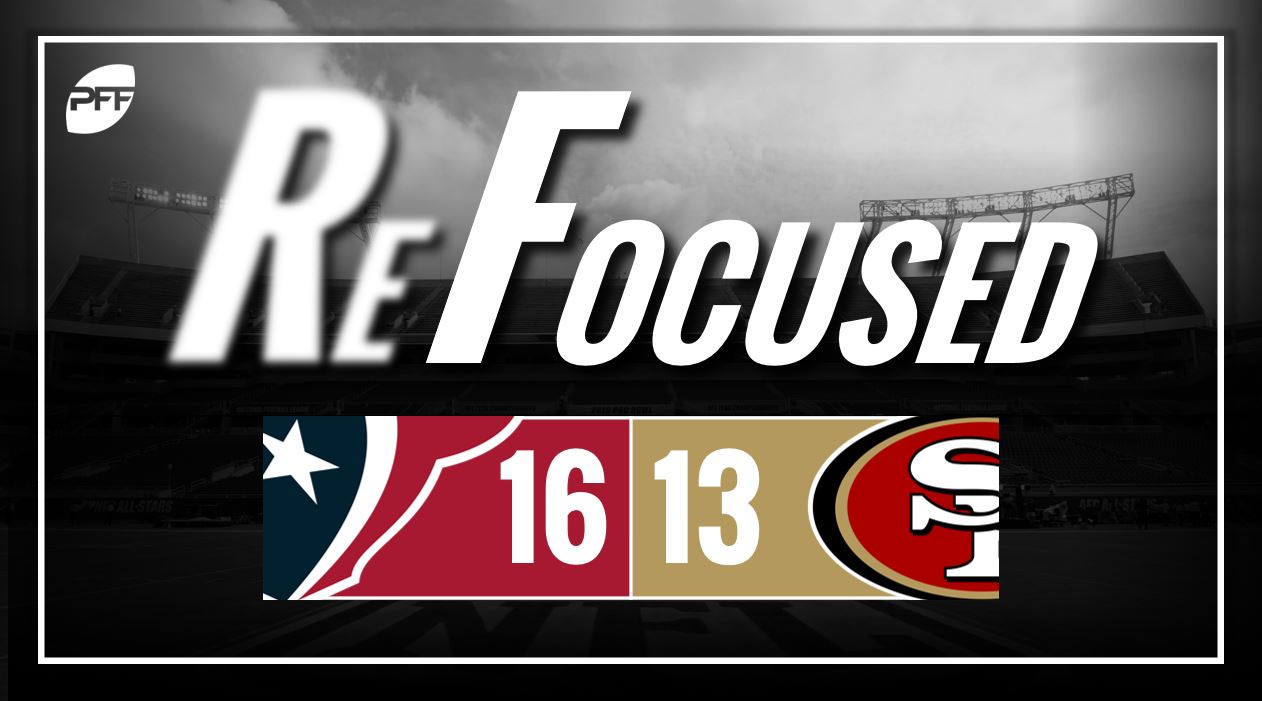 San Francisco QB Jimmy Garoppolo got the offense rolling on the first drive with a perfect pass over CB Kevin Johnson on a vertical route to Marquise Goodwin for a 40-yard gain on 3rd & 7. Later in the drive, the 49ers exposed how much they trust Garoppolo, keeping the ball in his hands on 4th & 1, maintaining his composure in the face of a bull rush by Christian Covington to connect with a wide open Kyle Juszcyk down the right sideline for a 24-yard pickup. He finished off the drive with a touchdown to Trent Taylor on a slant route.

The combination Goodwin and Dante Pettis both displayed their wheels and crisp route running that only make Taylor more dangerous in the slot. While Goodwin broke out early with the 40-yard reception, Pettis waited until the second quarter to connect with QB C.J. Beathard on a 12-yard comeback, 20-yard gain on a slant and a pass just overthrown down the right sideline that would have gone for a 63-yard touchdown.

Ahkello Witherspoon had a rough evening for the 49ers, as he gave up a number of big receptions throughout the first half. He also took a bad penalty on a punt that pinned the 49ers deep in the own end towards the end of the half. However, the second half belonged to defensive interior lineman D.J. Jones, who was nearly unblockable. He used his power to stand up blockers and toss them aside in time for a number of key run stops and even added a couple quarterback pressures.

Deshaun Watson played just one series, but he led the Texans on a long touchdown drive, their only one of the game. His best throw may have actually been a dropped touchdown on a short hook route, as he wisely placed the ball behind his receiver and away from the closing linebacker. Outside of the first drive of the game with Watson at the helm, Houston's backup quarterbacks were ineffective. Both Brandon Weeden and Joe Webb struggled with their accuracy, as both had a number of off-target passes to all levels of the field.

Proving to be a thorn in the side of the 49ers offensive line throughout the contest, second-year defensive end Carlos Watkins made his presence felt both by rushing the passer and in run defense. Watkins filled the intended point of attack to force a cut by RB Joe Williams in the third quarter and drove starting RG Joshua Garnett into the quarterback toward the end of the half.

Another standout on the defensive line, Marcus Hardison submitted one of the plays of the night midway through the fourth quarter. Hardison easily beat RG Jonathan Cooper to stonewall a Williams rushing attempt through the B-gap and also forced a hold from center Coleman Shelton after again tossing Cooper to the side to pressure Beathard earlier in the quarter.

San Francisco: Until the 49ers can get their starting running backs healthy, this offense will rely entirely on the arm of Garoppolo. While that may be enough some days, it will hinder the potential of an offensive juggernaut intent on making its mark on the NFL.

Houston: Poor offensive line play, poor accuracy from the quarterbacks and stopped route by a wide receiver which resulted in an interception was the perfect recipe for a long night for the Houston offense.