Race for Rookie of the Year - Week 2

FOXBOROUGH, MA - SEPTEMBER 7: Kansas City Chiefs running back Kareem Hunt (27) outruns the Patriots defense on a long gain for first down that set up the Chiefs' final touchdown, before New England Patriots free safety Devin McCourty (32) was able to force him out of bounds on this run. The New England Patriots host the Kansas City Chiefs in the NFL regular season football opener at Gillette Stadium in Foxborough, MA on Sep. 7, 2017. (Photo by Barry Chin/The Boston Globe via Getty Images)

All season long, PFF will be tracking the rookies around the league to keep tabs on the race for Rookie of the Year. Below is our weekly check-in after the Week 2 games. Who is out in front in the race? 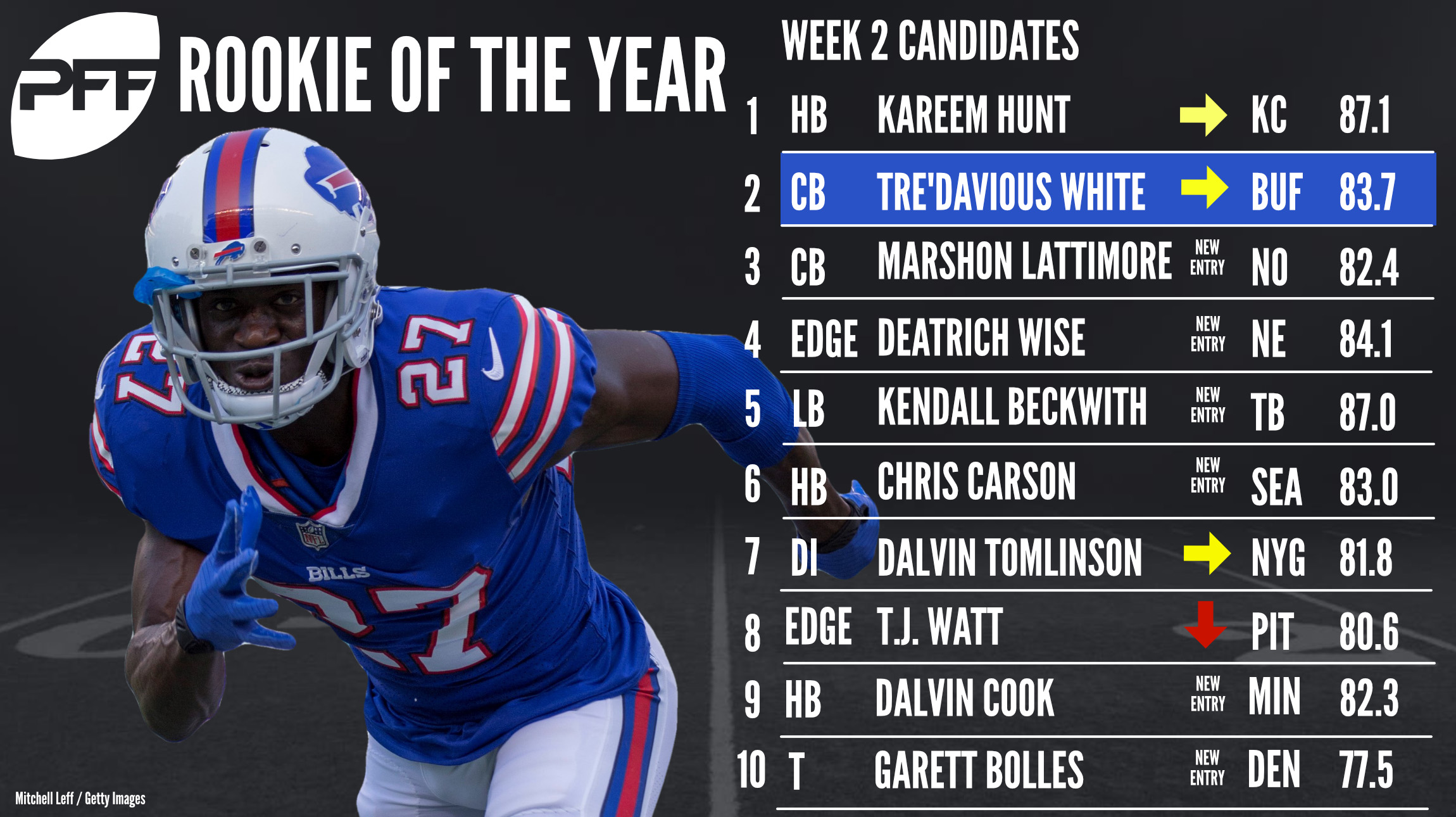 Elite Stat: Hunt has averaged 4.37 yards per carry after contact through two weeks, the second-highest average in the NFL.

Hunt has emerged as the focal point of Kansas City’s offense through the first two weeks of the season and he’s absolutely thrived. He was one of the most elusive backs in college football last season and that success has translated to the NFL seamlessly: his 10 missed tackles on carries are tied for the most in the NFL with C.J. Anderson (and Anderson has had 15 more carries than Hunt) and his 14 missed tackles on all of his touches lead the league.

White has shown through two weeks that he’s capable of not just good coverage, but good all-around play. Buffalo’s first round pick is one of five cornerbacks to rank within the top-16 in both coverage grade and run defense grade. He’s also shown a penchant for getting his hands on the football as he’s one of the 22 cornerbacks who have multiple pass breakups after two games.

Elite Stat: Lattimore has made nine tackles without missing a tackle through two weeks, the eighth-best rate among all cornerbacks.

The Saints’ defense was torched by Tom Brady and the Patriots’ passing attack this past weekend, with the exception of Lattimore. The Ohio State product spent much of the game covering Brandin Cooks, who hauled in just one catch on three targets for 15 yards, Lattimore also broke-up a pass intended for Cooks. Brady had a 72.9 passer rating when he targeted Lattimore in coverage this past weekend compared to a 147.8 rating when he targeted anyone else in New Orleans’ defense.

Elite Stat: Wise ranks fifth among edge defenders with a 16.9 pass-rush productivity rating (PRP measures pressure created on a per snap basis with weighting towards sacks).

The fourth-round rookie followed up a good showing in his NFL debut (75.9 overall grade) with a great Week 2, earning an 86.5 overall grade against the Saints. Against New Orleans, Wise racked up five total pressures – including three hits and a sack – on 26 pass-rushing snaps. If he’s able to produce consistently as a pass-rusher for the Patriots, the rest of the league better watch out.

Elite Stat: Beckwith ranks 17th among linebackers with an average of 12 coverage snaps per reception allowed.

Beckwith ranks 13th among linebackers in terms of run defense grade and seventh in coverage grade, making quite an impression in his career debut last weekend. Beckwith was targeted seven times while in coverage last weekend and he surrendered just three catches for 31 yards, holding Mike Glennon to a 56.3 passer rating when he targeted the third-round rookie out of LSU.

Elite Stat: Carson’s 100.1 Elusive Rating (ER measures a runner’s success beyond the point of being helped by his blockers) ranks fourth in the NFL.

Entering the season there were swarms of questions surrounding Seattle’s backfield: would it be Eddie Lacy leading the charge? Thomas Rawls? How about C.J. Prosise? Well, Carson has seized the job two weeks into the season and he currently has the third highest overall grade among all running backs. Carson ranks eighth in the league, averaging 3.12 yards after contact per attempt, a rate Seattle will likely need him to sustain given the struggles among their offensive line.

Elite Stat: Tomlinson’s five run stops are the fifth-most among interior defenders in the league.

Teaming up with the premier run-stopper in the NFL, Tomlinson and Damon Harrison are quickly forming the leagues most dominant run-stuffing defensive interior. Here’s the list of interior defenders who have played at least 30 run defense snaps and have a run defense grade of 85.0 or better: Harrison, J.J. Watt, Linval Joseph, Cameron Heyward and Tomlinson. Tomlinson hasn’t generated much as a pass-rusher through two weeks, but if his run defense remains at this level he’ll be an extremely valuable piece along the Giants’ defensive front despite.

Elite Stat: Ranks in the top four among rookies in both pass-rush productivity (9.7) and run stop percentage (7.1).

Watt has held his own as a pass-rusher but where he’s really shined is in run defense, where his 88.4 run defense grade currently ranks third among all edge defenders. He’s graded out as an above-average edge defender now in both of his games as a professional, if he can bring his pass-rushing up to where his run defense is, look for him to slide up this list.

Elite Stat: Cook has the third-highest elusive rating among rookies at 49.5.

Where Cook may have struggles in the passing game (two drops), he has more than made up for it with his running strengths. Cook currently holds the highest rush grade among all running backs at 89.5, and has forced a total of seven missed tackles on 34 carries. He only averages 2.41 yards after contact per attempt, but his shiftiness in space, and playmaking ability has been on display for the Vikings offense.

After a mediocre debut in Week 1, Bolles showed why the Broncos made him the first tackle taken off the board in this year's draft, finishing Sunday’s game against the Cowboys with an 83.0 overall grade. Bolles is just one of eight tackles this season to have at least 100 snaps under his belt while ranking in the top-25 in both pass protection and run blocking.