The third full week of preseason action has come and gone, so we at PFF have put together our third NFL Team of the Week to highlight outstanding performances at every position across the league. 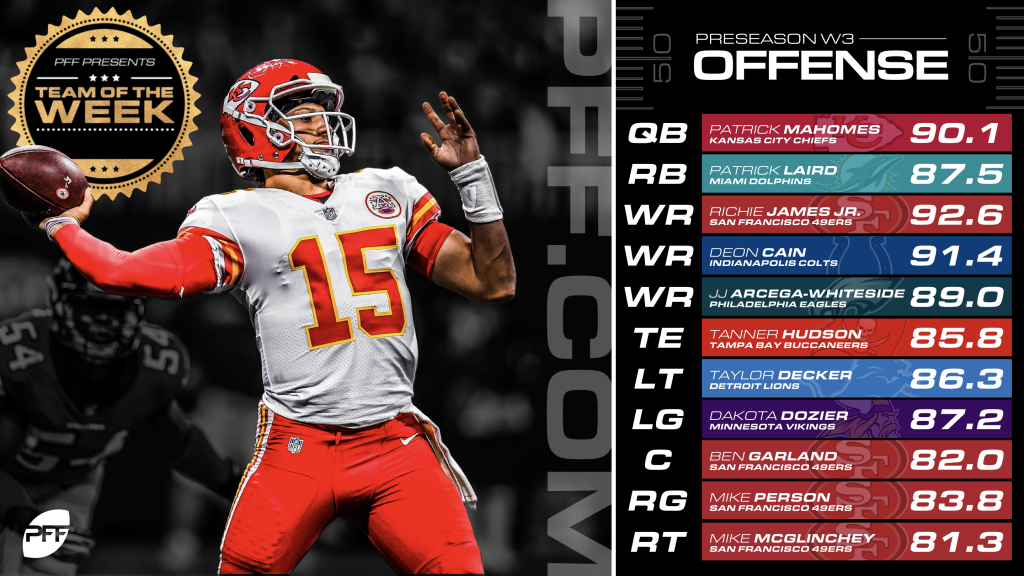 Seeing the most work of his preseason so far, 2018 NFL MVP Patrick Mahomes was at his dominant best early for the Chiefs this week. Mahomes completed two of the three passes he attempted 20-plus yards downfield for 109 yards and a touchdown.

Continuing a strong preseason, Miami Dolphins running back Patrick Laird had another impressive showing against the Jacksonville Jaguars this week. He forced three missed tackles on six carries to take his preseason total to six missed tackles forced on 19 rushing attempts.

A seventh-round draft pick out of Middle Tennessee a year ago, San Francisco 49ers wide receiver Richie James Jr. had his best performance of the preseason so far this past week. He caught all four passes thrown his way for 66 yards and averaged 8.25 yards per route run, the best mark among receivers with at least four targets this week.

A sixth-round draft pick out of Clemson in 2018, wide receiver Deon Cain is having a solid preseason as he looks to establish himself with the Indianapolis Colts. He found the end zone this week and ranked third among wide receivers with at least four targets in yards per route run (5.29).

Philadelphia Eagles second-round draft pick out of Stanford, wide receiver J.J. Arcega Whiteside, got plenty of work this week, ranking third among wide receivers with nine targets. He made the most of those opportunities, pulling in eight grabs for 104 yards, both of which led players at the position this week.

Keeping his spot at tight end on the PFF Team of the Week, Tampa Bay Buccaneers tight end Tanner Hudson had another solid showing this week. The 2018 undrafted free agent averaged 2.72 yards per route run, the third-best mark among tight ends to see at least four targets this week. Through three games this August, he leads the NFL in receiving yards with 226 and his 90.3 PFF receiving grade leads all tight ends and wide receivers who have seen at least 10 targets in August.

Dozier played both tackle and guard for the Vikings this week, with 23 of his 42 snaps coming at left guard. At either spot, he didn’t allow a sack, hit or hurry, despite totaling 19 pass-blocking snaps in the game.

The second of three San Francisco 49ers offensive linemen to make the PFF Team of the Week this week, right guard Mike Person saw 22 snaps against the Kansas City Chiefs. He produced a PFF run-blocking grade of 78.9 in his first action of the summer and didn’t allow a single sack, hit or hurry from 13 snaps in pass protection.

The San Francisco 49ers 2018 first-round draft pick saw his biggest workload of the season so far, playing 38 snaps at right tackle against the Kansas City Chiefs. McGlinchey produced a 100.0 pass-blocking efficiency rating and has yet to surrender a sack, hit or hurry on 28 pass-blocking snaps so far this preseason. 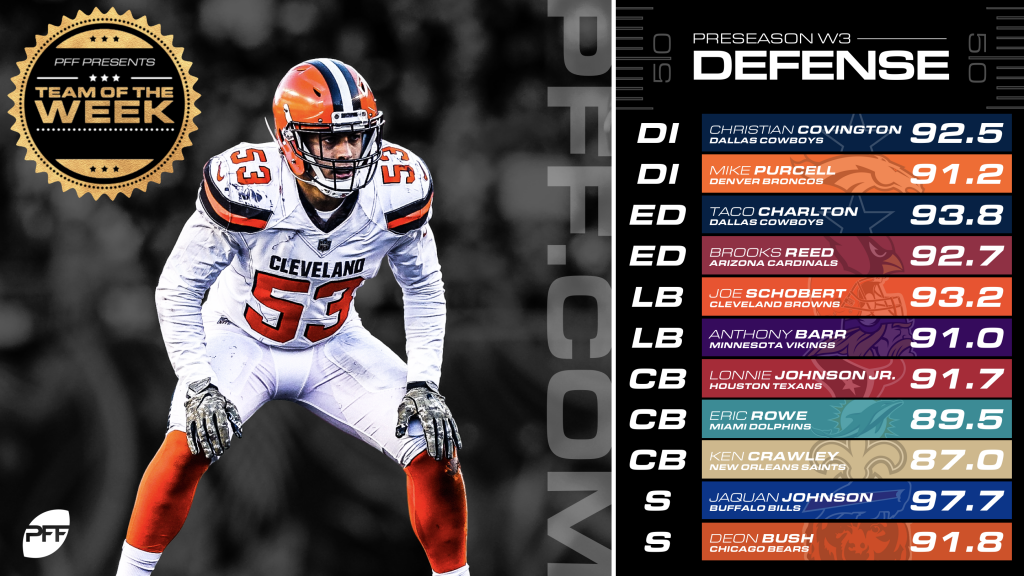 Joining the Dallas Cowboys after four seasons with the Houston Texans, Christian Covington had his best performance of the season against his former team this week. From 13 pass-rushing snaps against the Texans, he registered a sack and a hurry and forced a fumble on said sack.

Mike Purcell delivered his best performance of the summer for the Denver Broncos against the Los Angeles Rams this week. He registered a hit and two hurries from 14 pass-rushing snaps against the Chiefs, but it was against the run where he really stood out. A seemingly constant force in the backfield in the game, he produced a PFF run-defense grade of 90.5.

After two disappointing seasons since being drafted by the Cowboys in the first round out of Michigan, Charlton delivered the kind of performance that will give fans hope of a turnaround. Rushing the passer 14 times against the Houston Texans led to two sacks, one of which included a forced fumble and fumble recovery. He had another sack negated due to penalty and also forced a fumble on a tackle of running back Damarea Crockett after the catch.

Reed rushed the passer just nine times against the Minnesota Vikings but still made a big impact. Along with beating a blocker inside off a stunt, he also registered a sack and forced a fumble, getting the better of offensive tackle Storm Norton in the process.

Joe Schobert has developed into one of the better off-ball linebackers in the NFL since arriving with the Browns as a fourth-round draft pick out of Wisconsin back in 2016. He showed exactly why in the Browns game against the Tampa Bay Buccaneers this week, coming away with a pass breakup in coverage and registering a tackle resulting in a defensive stop on three of his four solo tackles.

Barr was very nearly a member of the New York Jets this past offseason, but performances like we saw against the Arizona Cardinals show why the Vikings will be happy to have him back in the fold in Minnesota. All five of his solo tackles resulted in a defensive stop, and the two receptions in his coverage earned just five yards per catch.

The Texans second-round draft pick out of Kentucky saw his second action of the preseason this week and made some impressive plays in coverage. On the field for 29 coverage snaps, he allowed just one reception for nine yards and an NFL passer rating of 39.6 on throws into his coverage, while also coming away with two pass breakups.

Former second-round draft Eric Rowe joined the Miami Dolphins after three seasons with the New England Patriots and has flashed strong performances so far this August. Targeted nine times against the Jacksonville Jaguars, he allowed five receptions for 59 yards and came away with an interception and two pass breakups.

Looking to bounce back after struggling last season, New Orleans Saints cornerback Ken Crawley delivered his best performance of the preseason against the New York Jets this week. From 18 snaps in coverage, he allowed just one reception that went for no gain and came away with a pass breakup.

A standout at the University of Miami, safety Jaquan Johnson fell to the Bills in the sixth round of the 2018 NFL Draft but showcased his ability as a playmaker this week. Along with a pass breakup in coverage, he also forced and recovered a fumble against wide receiver Travis Fulgham after a reception on a slant route.

A fourth-round draft pick back in 2016, Deon Bush has been making plays for the Chicago Bears’ defense this preseason. After coming away with an interception and pass breakup against the Carolina Panthers in the preseason opener, this time he made an incredible interception, ripping the ball away from the tight end before running to the end zone for the touchdown after not being ruled down by contact.

Does this need anymore of an explanation other than to state that he boomed a 61-yard field goal as time expired in the first half?

The Miami Dolphins punter averaged 4.84 seconds of hang-time on five punts this week, the highest average among punters with at least four punts in the third week of preseason action.

The 2019 undrafted free agent boosted his hopes of making the final roster for the New Orleans Saints with an impressive 78-yard punt return for a touchdown.

Thomas was on the field for nine snaps on special teams this week and delivered with a blocked punt, which he duly recovered in the end zone after some fortuitous bounces for a touchdown.