So, how do the performances of the league's quarterbacks stack up when compared to one another in 2018? We take a look at the PFF season grades for all 32 team's signal-callers to this point. 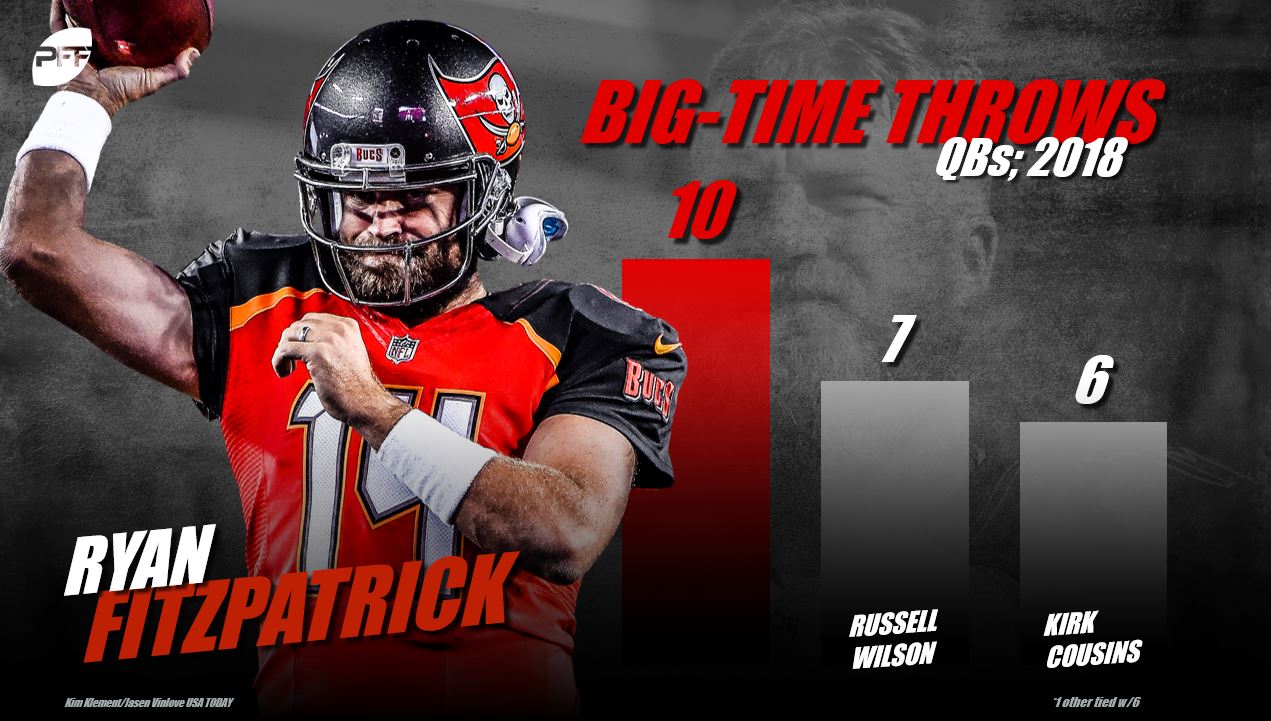 Mahomes uncorked six touchdown passes in Week 2 to give him 10 on the season as he's managed to launch five big-time throws himself.

Once again, Brees continues to be one of the NFL's most accurate quarterbacks, even if the box score doesn't agree. He's fielded an 84.6 percent adjusted completion percentage (accounting for dropped passes, spiked balls, passes as he was hit), which is good enough for third in the league.

Cousins has been victim to the most dropped passes this season (eight), hiding his overall proficiency mark from the general box-score view. His 80.8 percent adjusted completion percentage ranks eighth. 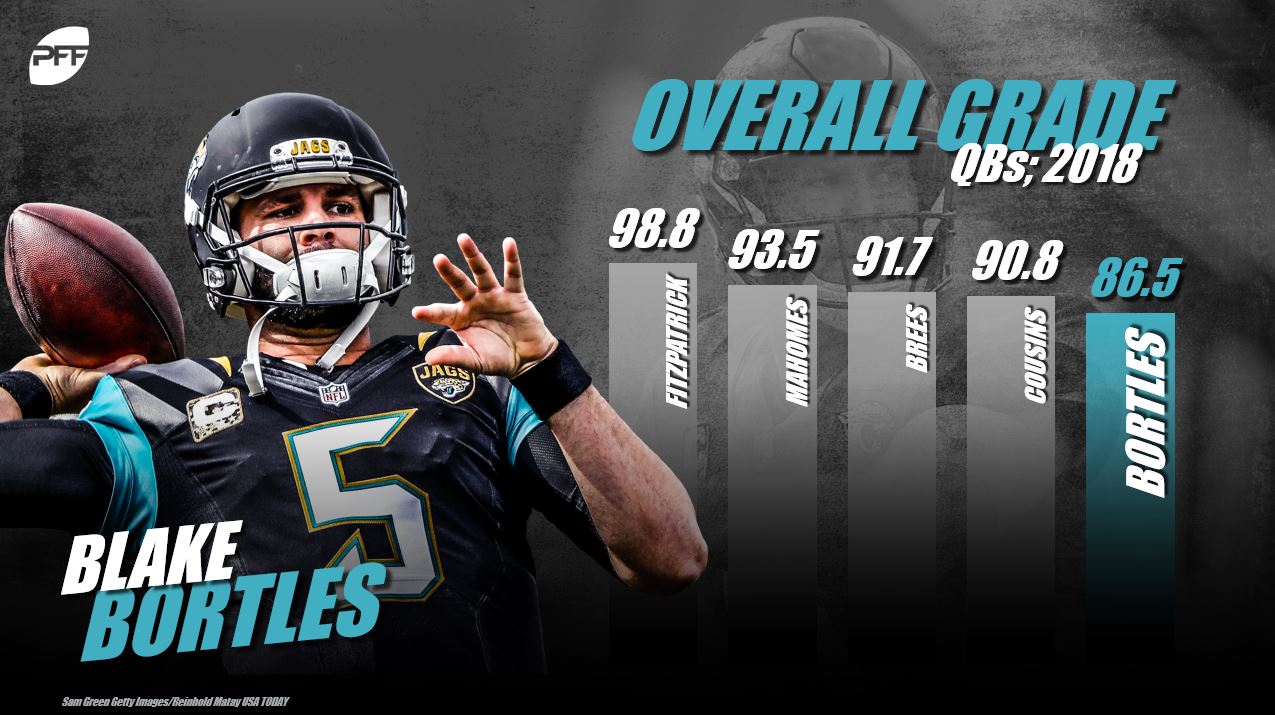 Bortles adjusted completion percentage is hovering right at the top-15 mark as he's had six passes dropped this season.

The future Hall of Famer has thrown five big-time throws this year while he has also taken incredible care of the ball, not tallying a single turnover-worthy pass.

Rivers' may not take as many shots downfield as he used to but he's been extremely reliable with the ball this season. His 82.4 percent adjusted completion percentage ranks sixth after two weeks.

You have to look no further than his comeback performance in Week 1 after a leg injury to see Rodgers' worth to the Packers as a team. Security is always a thing in football and Rodgers hasn't made a turnover-worthy pass all season long.

There has been a little boom-or-bust in Luck's first action in some time. He's unleashed more turnover-worthy passes (four) than he has big-time throws (three) in two games. 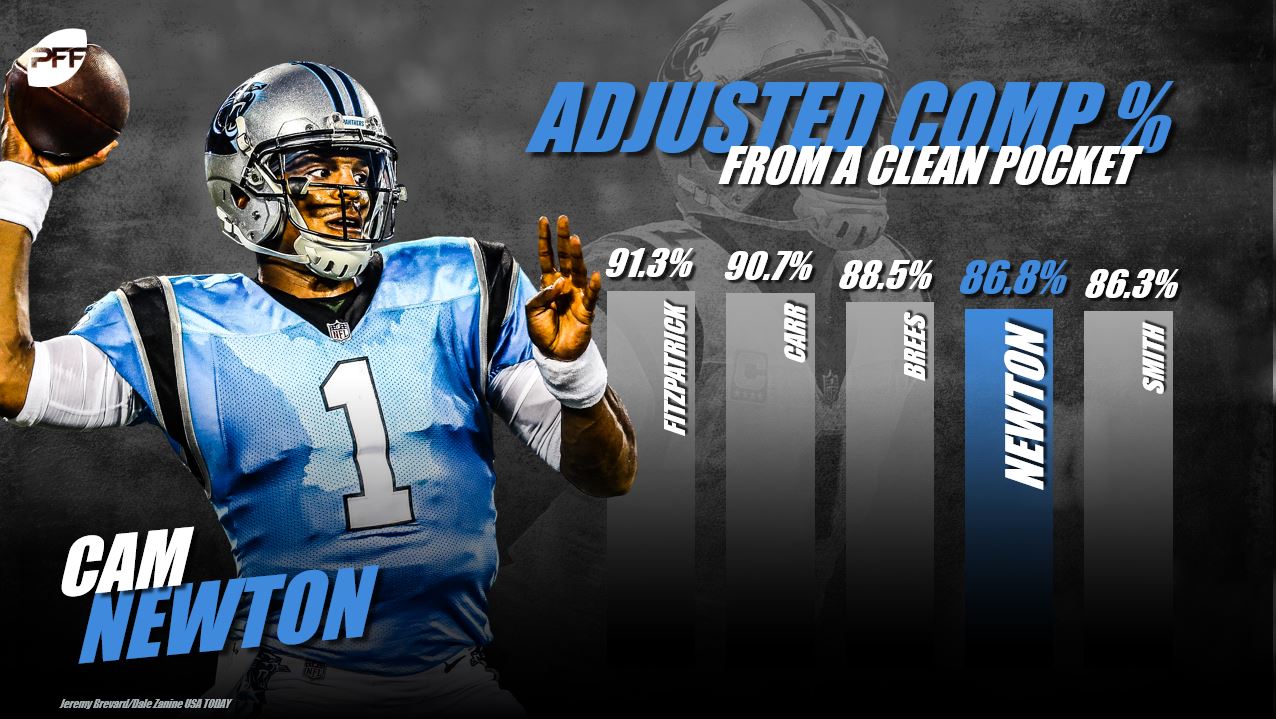 Newton gets the job done with his feet when necessary but he's also received a lot of assistance from his supporting cast through two weeks. 53.2 percent of his passing yards have come after the catch, ranking as the eighth most this season.

Dalton is averaging a depth of target of just 7.1 yards past the line of scrimmage this season but that figure is still good enough for him to target a pass past the first-down markers on 41.4 percent of his passes, showing how frequently the Bengals offense has been kept on schedule.

Manning has transitioned in his career and that is seen clearly in the fact that he has targeted a pass short of the first-down markers on 64.2 percent of his passes – the fourth most among quarterbacks.

Smith may be just what the Redskins need at quarterback, getting the ball to their skill players in space. He's allowed his receivers to gain 58.0 percent of his total passing yards after the catch through two weeks.

Carr had one of the more impressive displays from an accuracy standpoint against Denver and for the season, he sports an adjusted completion percentage of 85.5 percent, which is the second highest this season.

Keenum has regressed since departing Minnesota through two games, throwing for a league-high four turnover-worthy passes this season. He hasn't gotten much help, however, as his seven dropped passes rank as third-most in the NFL.

Leading the league in two specific categories is not going to win you many games, and that's just what Stafford has done so far: He leads the league in turnover-worthy passes (four) and catchable passes dropped (eight).

Bailed on out occasion and hit with some luck, Watson actually has more turnover-worthy passes this season (three) than he does actual interceptions (two). 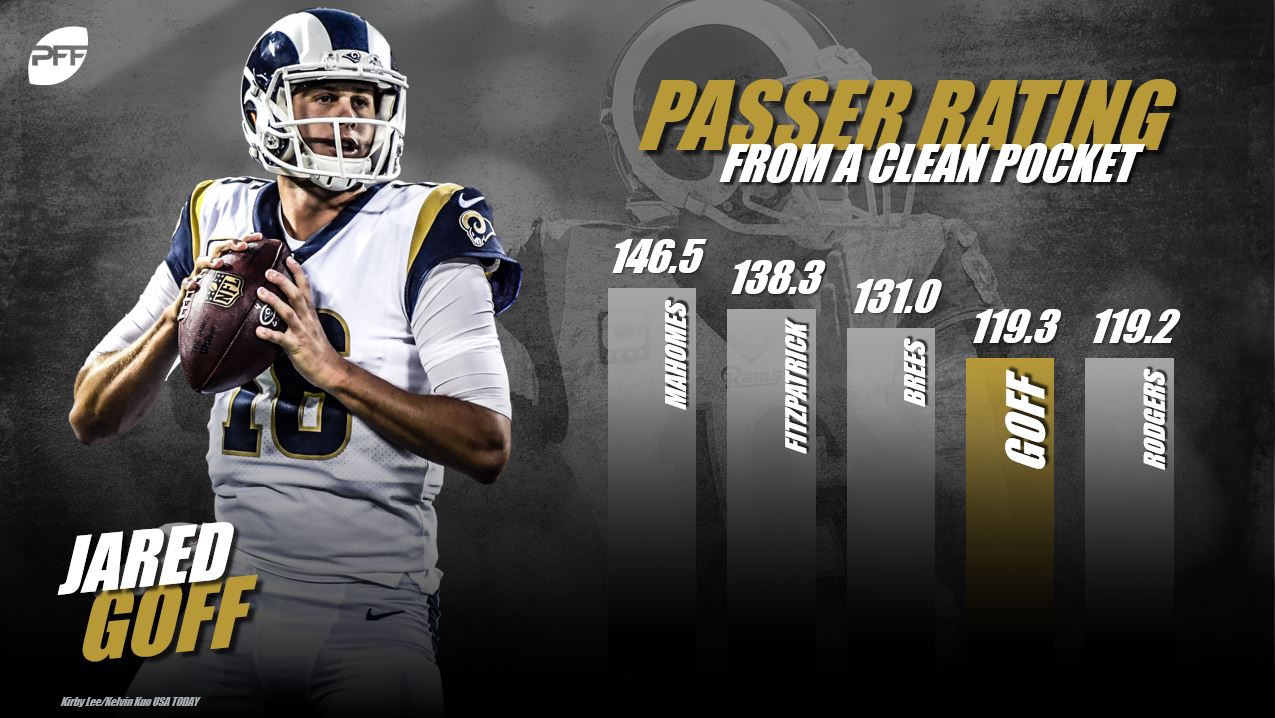 Goff is averaging 10.4 yards per targeted pass, the fifth-highest mark among the league's quarterbacks.

Tannehill has been relatively safe with the ball, throwing a big-time throw just twice while throwing short of the first-down markers on 60.8 percent of his passes.

Darnold hasn't let any rookie jitters get to him apparently, even after the pick-6 to open his career. He has seen a 10.1-yard average depth of target on throws this year, the seventh-highest in the league.

Garoppolo has been a little snakebitten to start 2018, throwing just two turnover-worthy passes but credited with three interceptions to his name.

Keeping the ball out of harm's way has been a Prescott staple in his career and this year is no different. Except, only this year, he's rarely thrown a ball downfield seeing just an 8.6-yard average depth of target.

Foles started out on the right foot in Week 1 before floundering in Week 2. On the season, he has thrown just one big-time throw and will now relinquish starting duties to Carson Wentz.

Ryan sports a top-10 mark by accumulating 58.3 percent of his yards through the air, and not after the catch by his receivers.

An injury kept him off the field in Week 2 but Mariota played uninspiringly in Week 1's rain game against Miami. He finished that contest with two turnover-worthy passes and no big-time throws. 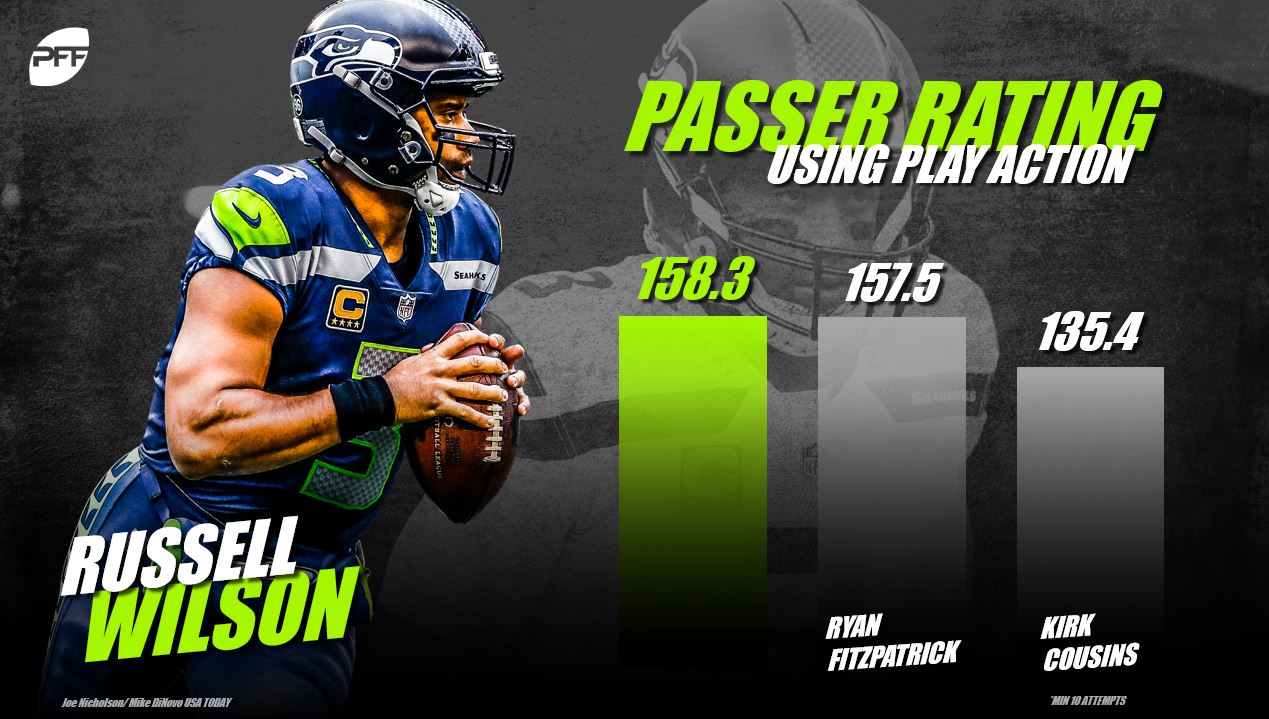 So far this season, Gabbert is the only quarterback with at least 20 pass attempts to not throw one of our big-time throws.

Taylor may be averaging 10.0 yards per target but he's paid for it in his accuracy. Currently, his 64.1 adjusted completion percentage ranks 30th.

Allen has had his moments, both good and bad but the bad seem to well outweigh the good so far. His three turnover-worthy plays are more indicative than his two box-score interceptions show.

Trubisky sees an average depth of target of just 6.4 yards this season, further explaining why 65.2 percent of his passes have been targeted short of the first-down markers, the second-highest rate in the league.

Bradford joins Peterman and Mariota as the only quarterbacks on this list without a touchdown pass though he's attempted more passes than those two combined, while both of his turnover-worthy passes have been intercepted.

Bills fans probably don't want to hear any more about Peterman who managed to throw three turnover-worthy passes on just 18 attempts in the season opener.