It’s been a few months since we published this study, which explores the idea that coverage is more important than pass rush in the NFL today. This received a wide range of reactions but got the conversation started about what it means to be successful as a modern defense.

We also published an article recently on a quarterback’s contribution to his own pressure. It became pretty clear (understandably) that time in the pocket was the most important variable determining whether a pressure occurred on a play. An immediate question with respect to defending the passing game is which defensive factor contributes to time in the pocket?

To answer this question, we took our play-by-play grading and adjusted it for replacement-level for each player for the previous two seasons and that season. We aggregated these player-level grades by each facet, pass-rushing and pass coverage, for all players who played for a given defense that game. Thus, for each play, we had a measure for how good that team was rushing the passer and in coverage up until that game.

[Editor's Note: These grades are a part of our PFF Greenline algorithm for both the NFL and NCAA. PFF Greenline will be LIVE and made available to all ELITE subscribers in August 2019. Check it out!] 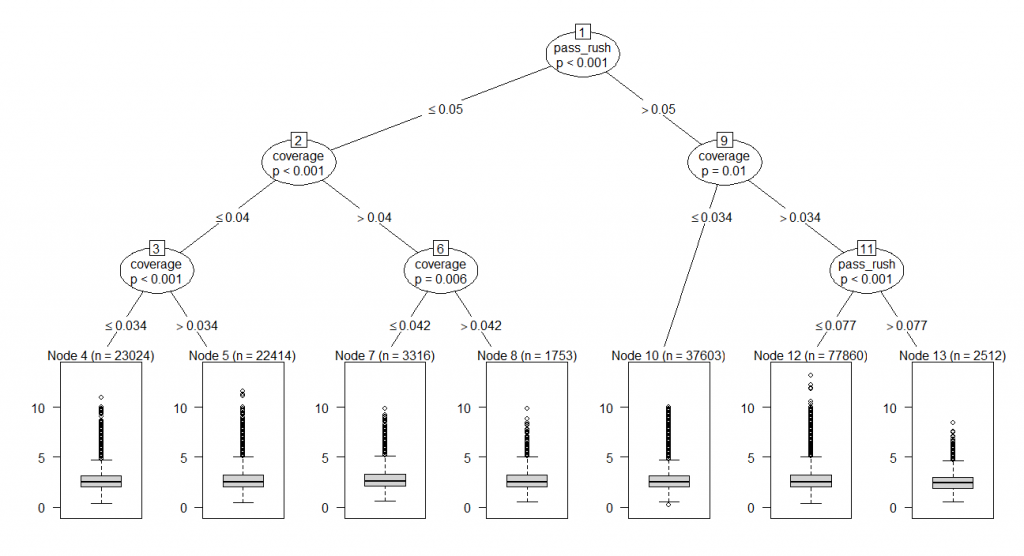 While this study might seem like giving more weight to pass-rush than our initial study – some caution is in order. First, the strength of a team’s pass rush is (theoretically) known a priori through game planning, so an opponent usually has the balance of the week’s preparation to scheme quicker throws, and quicker throws are every bit as valuable (if not more valuable) than longer-developing throws, especially when they are intentional. This is why, when one digs into the data deeper to see how to play success is predicted by opponent pass rushing and coverage, coverage abates play success at a much higher rate than pass rush, with or without adjusting for contextual variables.

Thus, the takeaway from this piece is a pushback against any notion that pass rush doesn’t affect offenses. It certainly affects offenses, forcing them to throw more quickly than coverage forces them to hang onto the ball. The issue for pass rush, however, is that quick passes are often effective, and so in terms of moving the needle defensively, it’s important to be able to cover well.