In Week 10-13 (four games), no wide receiver has gained more yards after contact (147) or forced more missed tackles (6) than Carolina Panthers rookie wideout D.J. Moore. The former Maryland standout is taking the NFL by storm as of late, removing any doubt that he’s the top rookie wide receiver through Week 13.

Catching 23-of-29 targets for 312 yards and a score in Weeks 10-13, Moore developed into a top NFL wide receiver in seemingly the blink of an eye. He had just 26 targets and 19 receptions in the Panthers’ first eight games of the season, a travesty by all means with hindsight now in play. 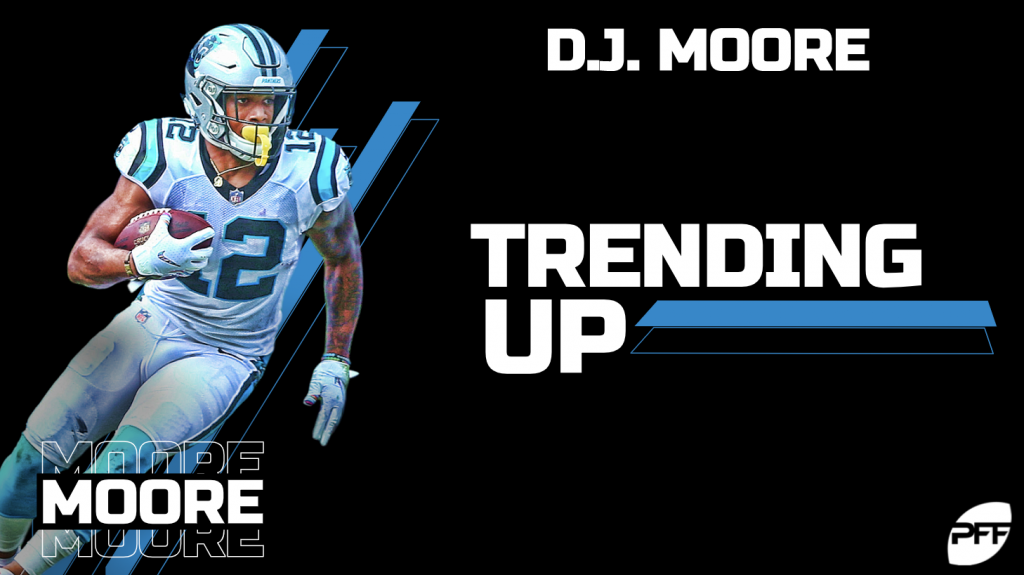 Moore averaged an impressive 2.24 yards per route run and 7.7 yards after the catch per reception in Weeks 10-13, ranking 10th and second, respectively. He also dropped zero of his catchable targets and picked up 16 first downs (including his lone score), all combining for an 83.6 receiving grade in the four-week stretch that ranked fourth among all qualifying wideouts.

The 5-foot-11, 210-pounder can do so much more than gain yards after the catch and make people miss, as well. Here, Moore gives Darius Slay a filthy head fake at the back of the end zone that nearly sends the former All-Pro to the turf and opens himself up for a touchdown. And the toe tap along the sideline was nice, too.

This is an incredible route and toe-tapping snag from #Panthers‘ rookie D.J. Moore. He's having himself quite the rookie campaign. pic.twitter.com/7RayXNkSW6

Moore’s recent successes have propelled his overall grade up to 82.9 for the season, which ranks 15th among all qualifying wide receivers and leads all rookies at the position. He also ranks 15th and first, respectively, in receiving grade (82.3) through Week 13.

Atlanta Falcons’ Calvin Ridley was in the mix early in the season and Tre’Quan Smith’s recent surge with the New Orleans Saints has been impressive, but neither of the two rookie wideouts comes close to Moore’s current production and overall grade. Moore sits 10.0-plus grade points ahead of all rookie wide receivers, and Moore ‘s 2.25 yards per route run average on the year is tops among rookies by a significant margin.

Losing four straight, Carolina can’t hang its hat on too many positives from their last four games, but Moore is an exception. He looks the part and then some, which only bodes well for the future of the franchise.