Panthers’ Curtis Samuel is finding his role in the NFL, deserves more touches

Officially a four-star “athlete” when he committed to Ohio State in 2014, the 5-foot-11, 195-pound Curtis Samuel has never had a cookie-cutter position in football, making it that much harder for him to carve out his role in the NFL. Samuel, however, is trending upward for the Carolina Panthers as of late, showing signs of drastic improvement across the board.

Forced to battle injuries at the tail-end of his rookie campaign and again at the start of the 2018 season, Samuel didn’t make his sophomore debut until Week 5. It didn’t take long for him to make an impact, however, as he caught two of four targets for 37 yards and a score in his first game back from injury since Week 10 of the previous year.

Samuel has since built on previous marks as a gadget weapon in Norv Turner’s offense, as he’s now totaled 148 yards and three touchdowns across just 11 touches in Weeks 5-9. His 13.5 yards per touch average is, of course, unsustainable, but his elite efficiency is far too impressive to have him averaging just 2.2 touches per game. 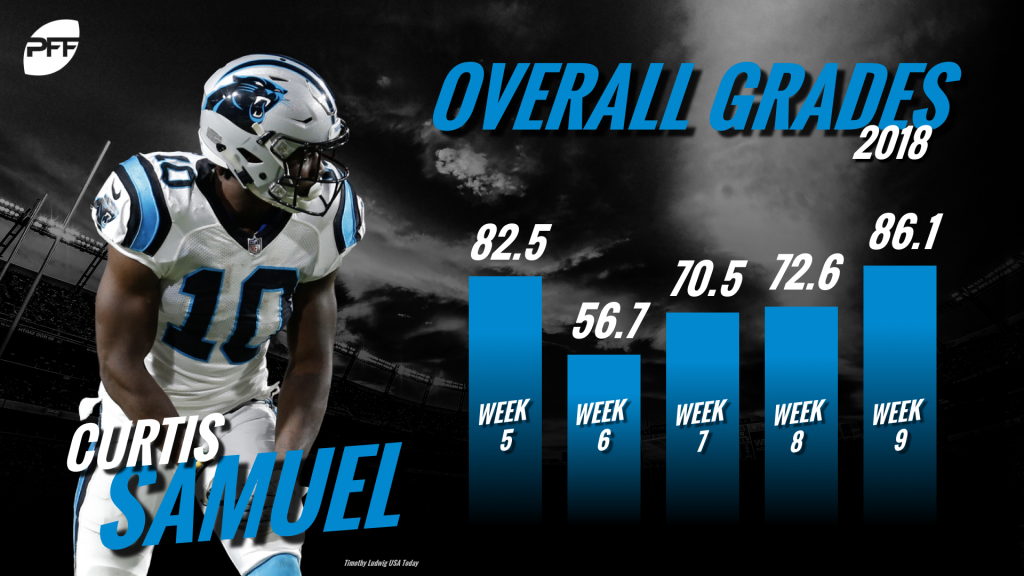 Samuel's improvement extends beyond his pre-snap alignment, as well.

All of Samuel’s receiving yards have come on six different routes in 2018, and no more than 26.4% of his receiving yards are tied to any one specific route. This wasn’t the case in 2017, as he recorded receiving yards on just four total routes and had 36.5% of his total receiving yards come on just out routes. Route versatility is paramount in improving at the wide receiver position, and all signs point to Samuel taking the right steps. He’s also had a step or more of separation on 75.0% of his targets this season, which is tied for the ninth-highest mark among receivers with 10-plus targets on the year.

The sample size is admittedly small in regard to Samuel’s start to the 2018 season, but the early returns are enticing. He’s proven efficient when targeted and earned 70.0-plus overall grades in every game he’s played five offensive snaps this season – a recipe for added attention in Carolina’s offensive game plan.