Now in a new offense, Bengals' Andy Dalton will be hoping to build off his career-best season

Andy Dalton has received a lot of criticism throughout his career, often referred to as an average or below-average quarterback. However, Dalton has always shown flashes of top-level play — he is only three years removed from his 81.7 overall grade of 2015, and he got off to a hot start last season, producing an overall grade of 88.9 through the first four weeks.

The hope is the veteran quarterback can recapture the magic of that impressive season, and the play-action-oriented offense that new head coach Zac Taylor has brought with him is ideally suited to do just that.

Last season, Jared Goff — with Zac Taylor as his quarterback coach — used play-action on 35.8% of his dropbacks, which ranked second in the NFL among qualifying quarterbacks behind only Lamar Jackson (42.9%). 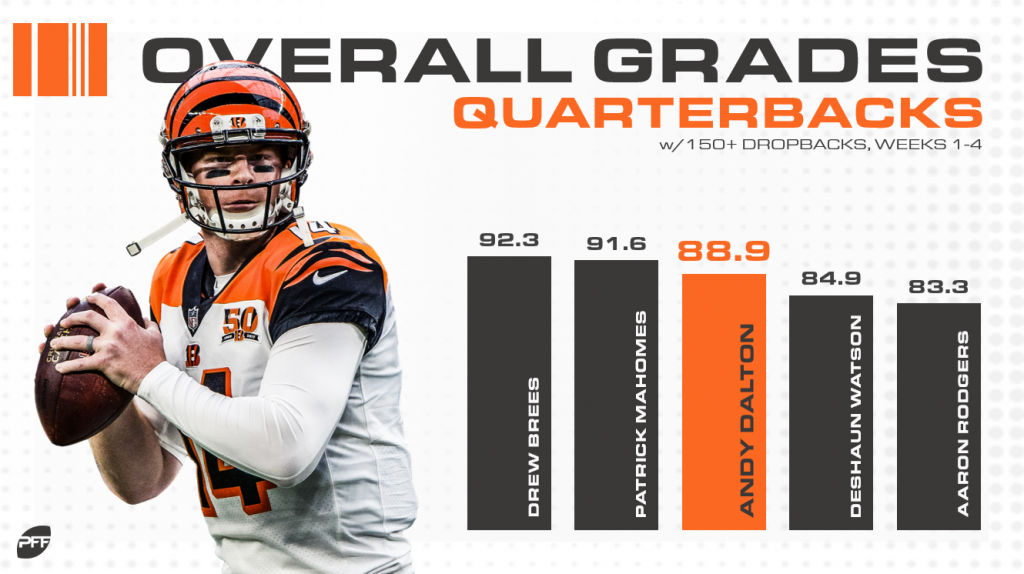 Last year, the average time to pressure on non-play-action dropbacks was 2.37 seconds, while the average time to pressure on play-action dropbacks was 2.70 seconds. Executing play-action effectively can help to make the offensive line’s life easier by slowing the pass-rush as defenders are forced to account for their assignments in the run game. In turn, it buys the signal-caller more time and space to scan the field and hides the offensive line's inefficiencies.

Looking ahead to the 2019 season, the increased use of play-action should only make Dalton's life easier behind a pass-blocking unit that was recently ranked 27th in PFF’s preseason offensive line rankings.

So, why will Dalton be able to replicate Goff’s success? New head coach Zac Taylor won’t just use more play-action — the Bengals have already been doing that. Instead, he will help the Bengals use play-action in a more effective manner, using motion and deception by having plays that resemble each other and therefore compromise the defense. He will also help the Bengals to get more quality looks as the Rams did in 2018, where they had at least a step of separation on 61.5% of their targets (T-12th), compared to a putrid 53.8% for the Bengals (31st).

If Taylor truly intends to run an offense that reflects that of the Rams, then it will also incorporate some of the routes that Dalton has been efficient on. Over the last four seasons when using play-action, Dalton has generated a passer rating of 106.5 on crossing routes and 90.1 on hitch routes. Last season, he was 22.2 points above the NFL average in passer rating on crossers and 15.7 points above the NFL average on hitches.

Andy Dalton may not be an elite quarterback by any means, but Zac Taylor can get the most out of him through an offensive scheme that will create better opportunities for Dalton while making more effective use of play action, and if Taylor can get Dalton to resemble his 2015 form, the Bengals could be a surprisingly competitive team in 2019.