Here are the top takeaways and highest-graded players from New York’s 16-13 win at home over the Saints.

Drew Brees perfect between the numbers in losing effort

It wasn’t quite the shootout this matchup proved to be in 2015, but Drew Brees still managed 46 dropbacks in a losing effort to the Giants. Brees had trouble connecting with receivers outside the numbers, completing just 2-of-10 passes thrown over 10 yards in the air and outside the numbers. But for whatever struggles he faced in that area, he was lethal between the numbers, particularly in the intermediate range (10-19 yards), where he completed all five of his attempts for 88 yards and his lone touchdown.

For as much as the Saints spent on former Colts tight end Coby Fleener, they’ve received poor returns so far on the investment. Fleener tied for the team lead with eight targets, yet only caught two passes, dropping a well-placed ball on a corner route against Giants S Landon Collins early in the first quarter. He’s notched just three catches for 35 yards through two weeks, despite seeing 12 targets. He'll have to increase his production, or else figures to be another poor free-agent signing for New Orleans. 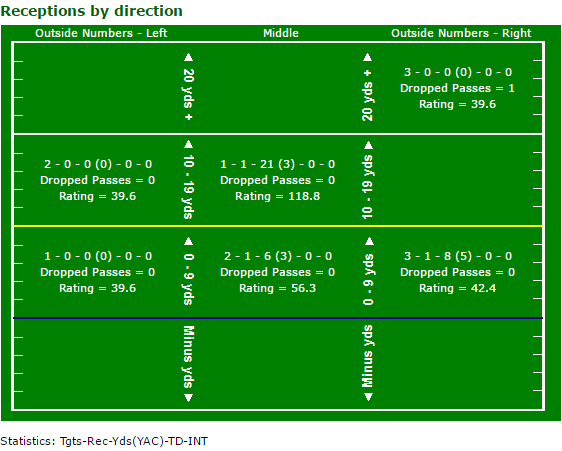 Linebacker Craig Robertson followed up an average Week 1 with a team-high grade against the Giants. Seven of his 12 tackles counted as defensive stops, although he failed to convert any of his nine rushes into pressure. DE Cameron Jordan also bounced back from a rough opener, grading above-average in both facets with two pressures to go with two stops, and several other positive plays at the point of attack in run defense.

On the back end, the Saints did an commendable job without Delvin Breaux, and with P.J Williams limited to just nine snaps. Before Williams went out, he compiled a stop and pass defense. Ken Crawley gave up the game-winning jump ball to WR Victor Cruz, but graded well otherwise, with a pass defense and just three other receptions allowed in more than 40 coverage snaps. The task of shadowing Odell Beckham Jr. went to Sterling Moore (34.3 overall grade), who had the worst game of the group, with multiple coverage penalties and six receptions allowed on 10 targets.

This was a solid performance from Eli Manning, who was nearly perfect when throwing between the numbers, going 17-for-18 there, several times taking advantage of the Saints’ linebackers biting hard on play action. As expected, he faced very little pressure against a pass-rush that had one of the league’s lower pressure rates throughout the preseason and in Week 1. The Saints reached Manning on just 18.2 percent of his dropbacks, although his quick release (2.30 average time to attempt) helped nullify the rush at times.

Among his best throws was a dime to Odell Beckham Jr. that was dropped on the team’s final drive. On the next play, though, he gave CB Ken Crawley a shot on a jump ball to Victor Cruz, which was one of the few times Manning put the ball at risk over 41 aimed attempts.

Right tackle Marshall Newhouse was one of the league’s highest-graded tackles in Week 1, but struggled against the Saints, with two sacks and two hurries surrendered in 41 pass-blocking snaps (although his second sack was a fairly difficult stunt pickup). Otherwise, the team’s offensive line had a solid game, particularly John Jerry, who made several positive blocks in the run and screen game.

Behind Manning, the second-highest grade on the Giants' offense went to rookie WR Sterling Shepard, who saw an increase from his Week 1 workload, catching all eight targets for 117 yards and a 118.8 passer rating. Those catches came against five different defenders in primary coverage.

Corners who make a lot of tackles are often the ones giving up a lot of catches, and while Jenkins allowed seven completions into his coverage, not one of those catches exceeded 15 yards. Excelling in the Giants’ defense, Jenkins surrendered just 49 yards on a team-high 10 targets, and his three defensive stops trailed only Landon Collins. While his near-interception of Drew Brees was an outstanding break on the ball, his recovery of the blocked field goal and subsequent touchdown are what pushed the Giants over the Saints in the end.