Beyond providing data for all 32 NFL teams, PFF also supports network broadcasters with game-preview packets that are used to enhance the in-game experience for fans and viewers. This Bengals-Chiefs preview features the same information our broadcast partners use for team research and in-game production.

Chiefs’ quarterback Patrick Mahomes has been sensational in all aspects of the game this season, but he’s been particularly great at delivering the deep ball. Through six weeks, Mahomes leads all QBs with 39 pass attempts targeted 20 or more yards downfield, and on those passes, he’s 20-of-39 for a league-high 655 yards and eight touchdowns. 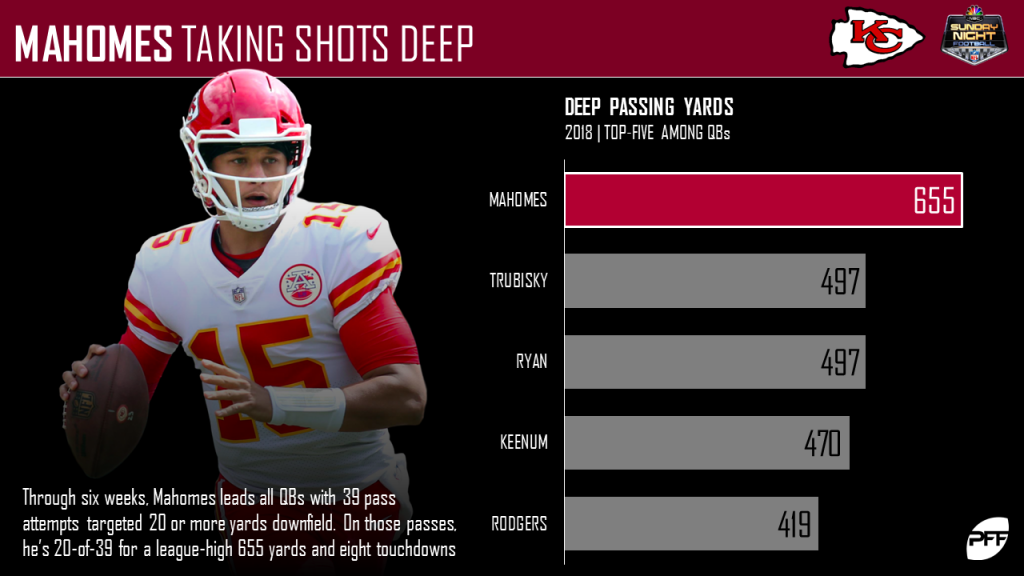 Hunt can’t be brought down

Kareem Hunt led all running backs in forced missed tackles a season ago (77), and he’s continued his elusiveness in 2018. He currently ranks first in avoided tackles on the ground with 25 on 103 attempts.

Ford pressuring from the edge

Through six weeks, Dee Ford has already recorded 34 total pressures, putting him on a career-high pace for pressures (90), sacks (13), quarterback hits (26) and hurries (50). His overall grade of 83.2 ranks top-10 among edge rushers, while his 87.8 pass rush grade ranks second-best.

As a unit, the Chiefs’ secondary has struggled this season, but Kendall Fuller’s down year has been particularly surprising. In 2017, Fuller was a standout in the Redskins’ secondary allowing only 40 receptions on 71 targets for 370 yards and four interceptions when in coverage. His 56.7 passer rating allowed ranked seventh-best at the position. This season, he’s already allowed 352 yards in coverage, and his 121.5 passer rating allowed is 11th-worst among corners. 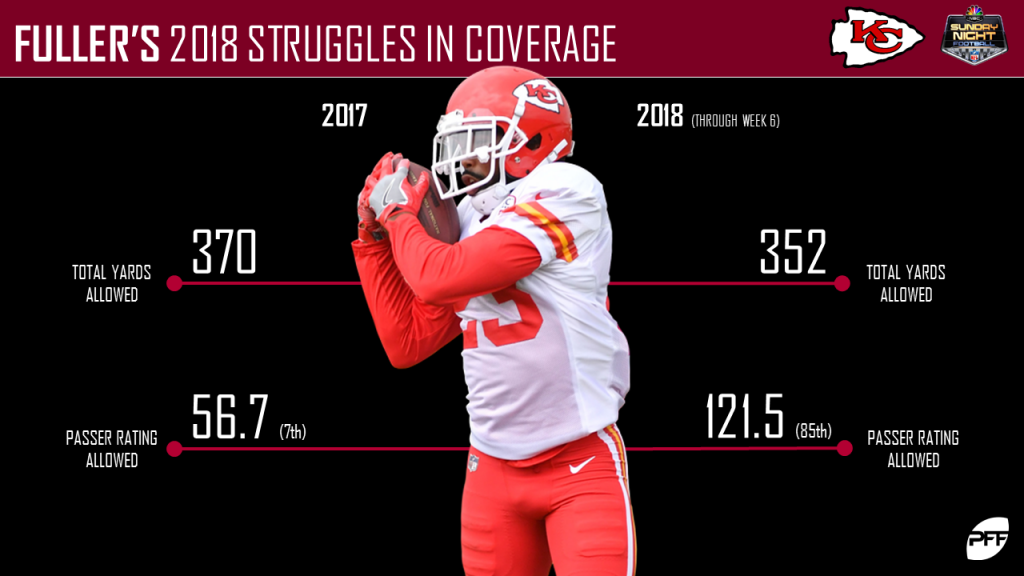 Dalton quick on the trigger

Andy Dalton has been quick to get the ball out of his hands this season. Through six weeks, Dalton ranks tied-for-second in average time to throw at 2.36 seconds. 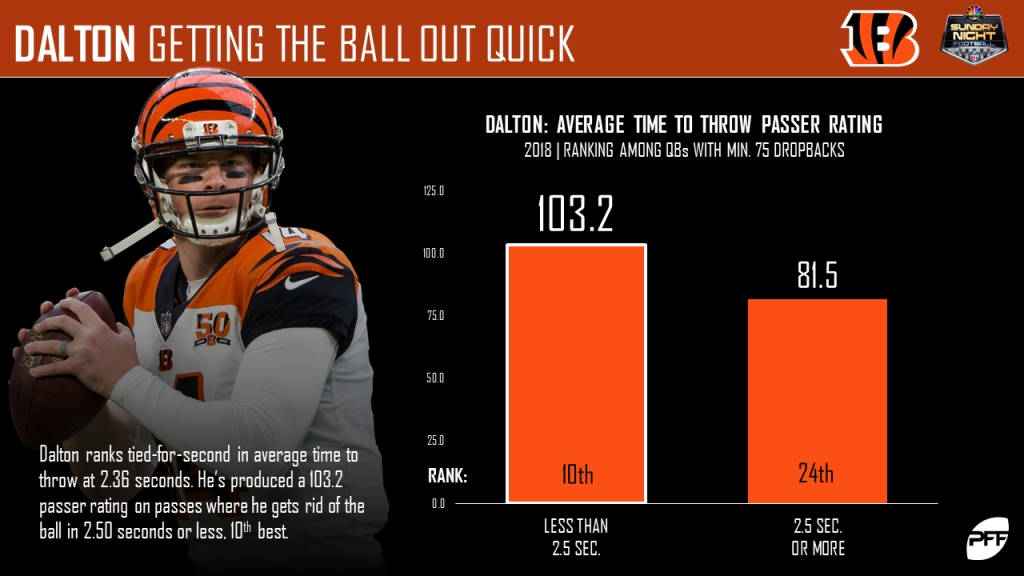 Green dominating from the slot

Bengals’ receiver A.J. Green has seen a major shift in his slot snap count in 2018. Through six weeks, Green has run a career-high 30.0% of his snaps from the slot. The move to the slot is paying off for Green, who leads the league in yards per route run from the slot at 4.34.

Atkins a force from the interior

Interior defender Geno Atkins has been a menace inside the Bengals’ defensive line. His overall grade of 85.7 ranks 10th at the position this season, and his pass rush grade of 83.4 is fourth-best. 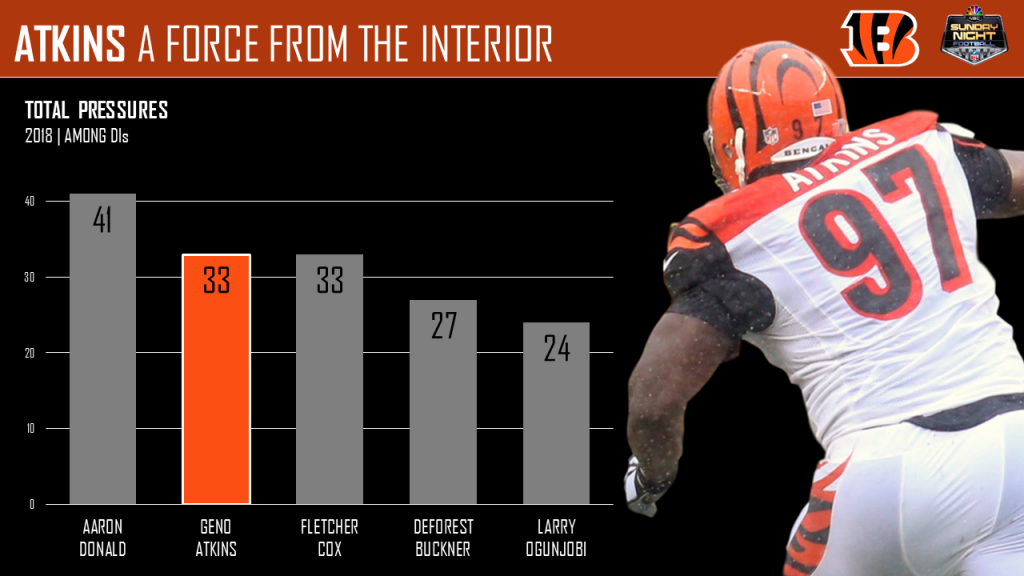 In 2017, William Jackson III locked down receivers with a 36.1 passer rating allowed and a 0.38 yards per coverage snap average, ranking second in both categories among cornerbacks. However, this season has been a different story. Jackson has allowed a passer rating of 99.6 when targeted, 64th among 108 qualified corners.