Beyond providing data for all 32 NFL teams, PFF also supports network broadcasters with game-preview packets that are used to enhance the in-game experience for fans and viewers. This Vikings-Eagles preview features the same information our broadcast partners use for team research and in-game production.

Carson Wentz has been productive as a passer since returning in Week 3 from his knee injury. However, it’s been noteworthy that the Eagles are limiting his designed runs. The offense has called only one designed run for Wentz on his 160 snaps through two games. Coming into this season, Wentz had 58 career designed rushing plays during his first two seasons.

Through a quarter of the season, Zach Ertz is by far the most targeted tight end in the NFL. Both Wentz and Foles have targeted Ertz 23 times in their two games as starters, and Ertz’s 46 total targets are 12 more than Jared Cook, who ranks second-highest with 34. Ertz has turned his looks into 31 receptions, most at the position, 327 yards, and a 78.8 passer rating when targeted. 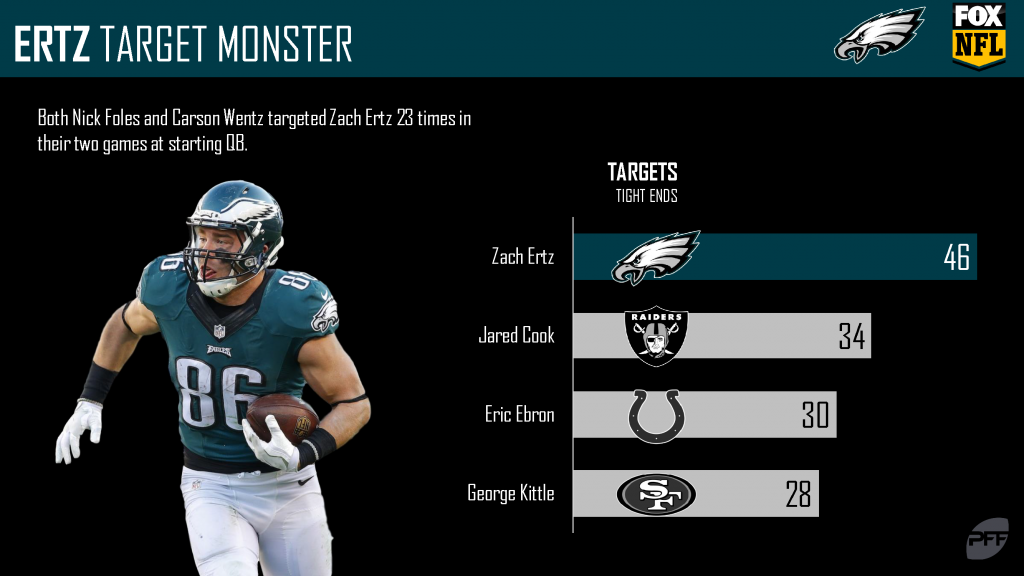 Will the Eagles feast on the Vikings' offensive line?

The Eagles’ defensive line has to be licking their chops at the thought of lining up against the Vikings offensive line. Through four games, the Eagles’ defense boasts five players with at least 12 pressures this season with Fletcher Cox leading the way at 21. More remarkable, the defensive line isn’t relying on blitzes to get to the quarterback. The team leads the NFL in pressure rate without blitzing at 44.7% so far this season. 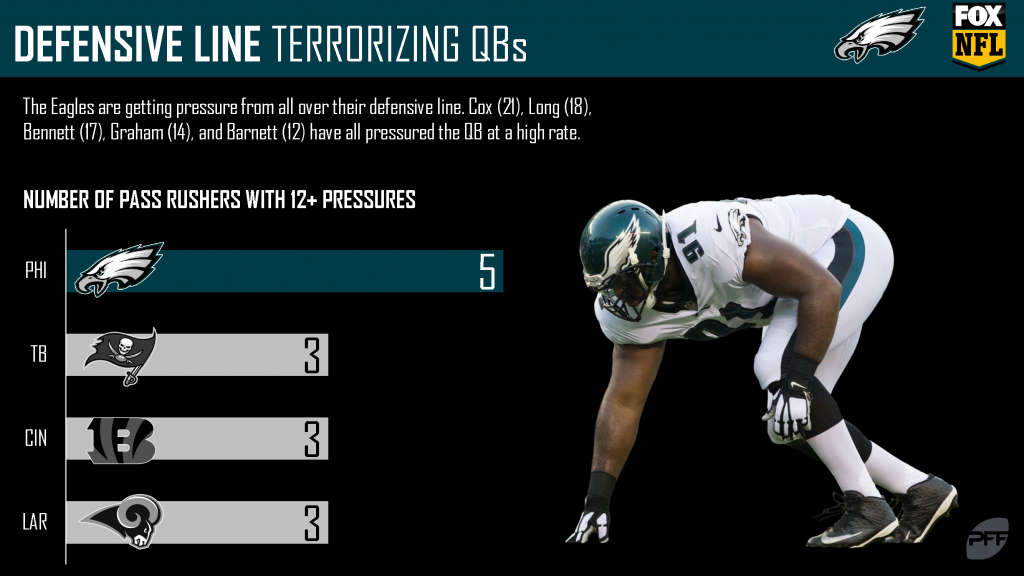 Brandon Graham might be the most balanced edge rusher in the NFL. The nine-year veteran currently ranks tied-for-18th with 14 total pressures rushing the passer this season. Graham is also stellar defending the run. This season, Graham has dominated with a 21.7% run stop percentage, by far the highest rate among edge defenders. 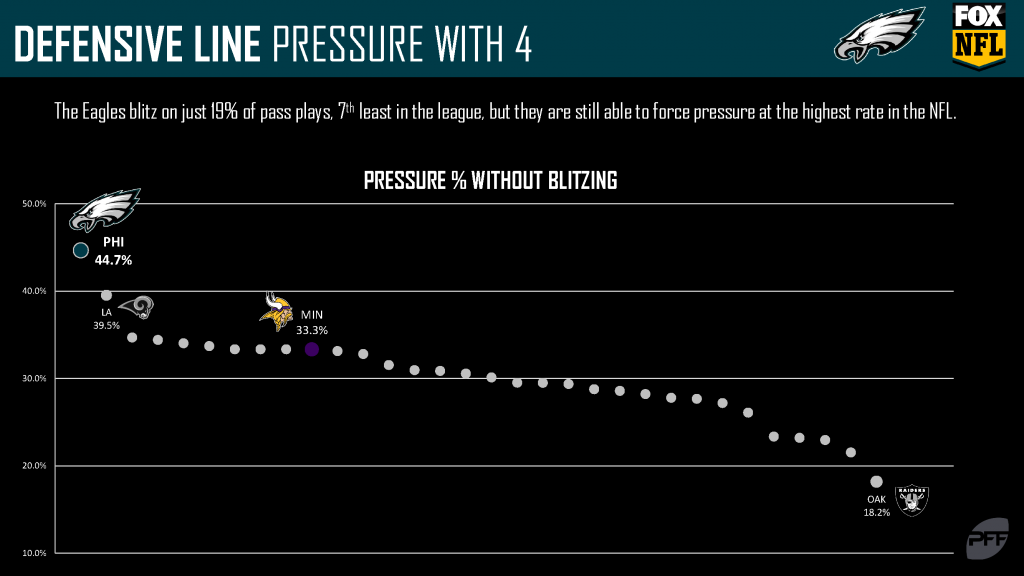 The Vikings have had severe problems protecting the quarterback through the first four games of the season. The unit has allowed 81 total pressures, by far the most in the NFL, and their 78.9 pass-blocking efficiency rating ranks third-lowest in the league. The Vikings are averaging over 20 pressures allowed per game. During the past two games, the team has surrendered 13 pressures each to Jerry Hughes and Aaron Donald, who now rank tied-for-sixth in terms of most pressures generated in a single game during the PFF era. 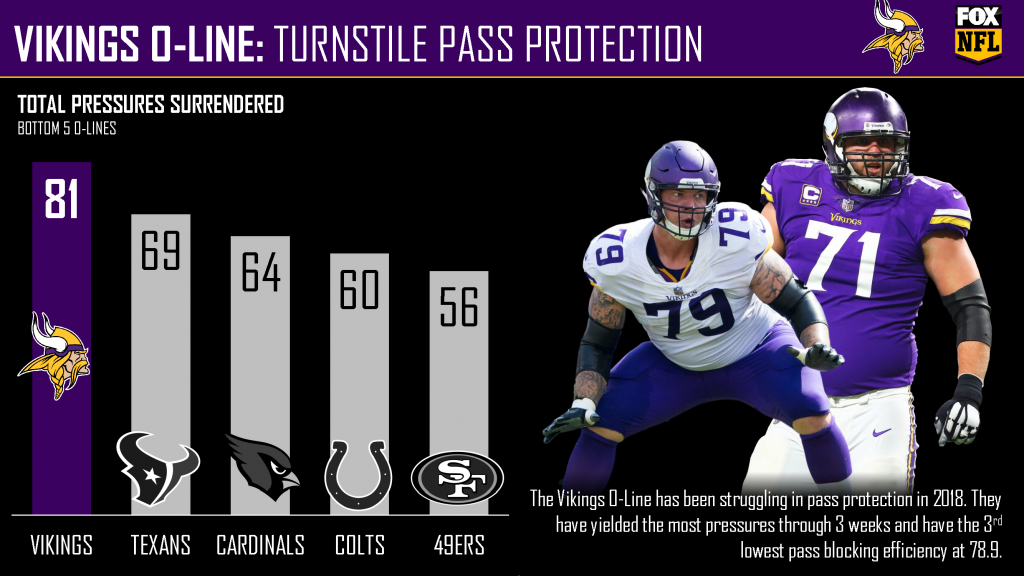 Kirk Cousins has been an efficient passer for the Vikings this season from both a clean pocket and under pressure. The quarterback currently ranks eighth in passer rating when kept clean at 112.2. More importantly, Cousins ranks 10th in passer rating while under pressure at 89.8; noteworthy considering he’s faced pressure on 89 dropbacks, most in the NFL through four games. His adjusted completion percentage vs. pressure is even more remarkable. The quarterback is on target at a rate of 78.1% when under fire in the pocket, fourth-best among quarterbacks. 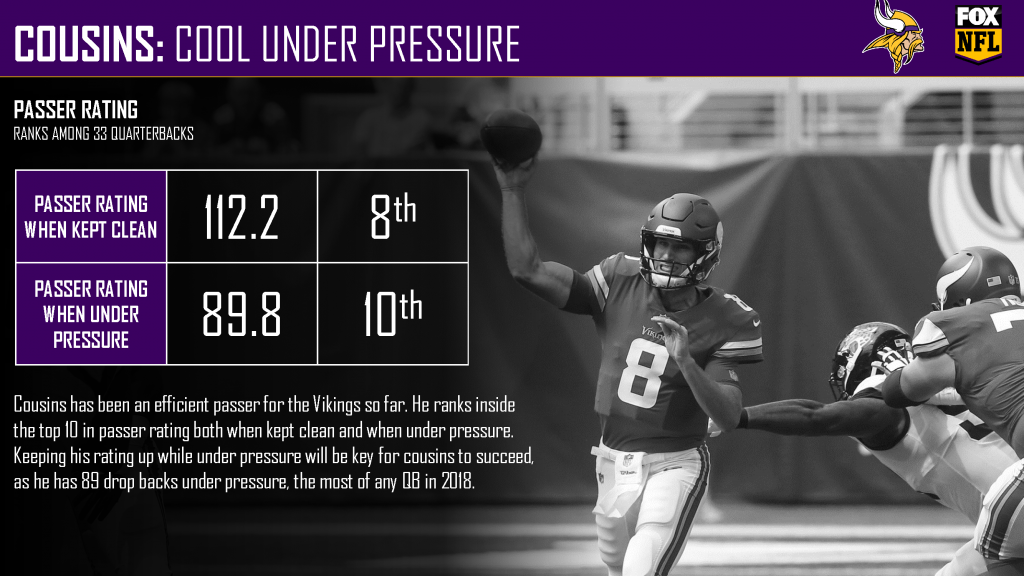 Danielle Hunter has been a standout of the Vikings’ underachieving defense so far in 2018, and now with the absence of Everson Griffen, he’s providing much-needed versatility. The fourth-year player has been productive rushing from both the right side of the line and the left side this season. 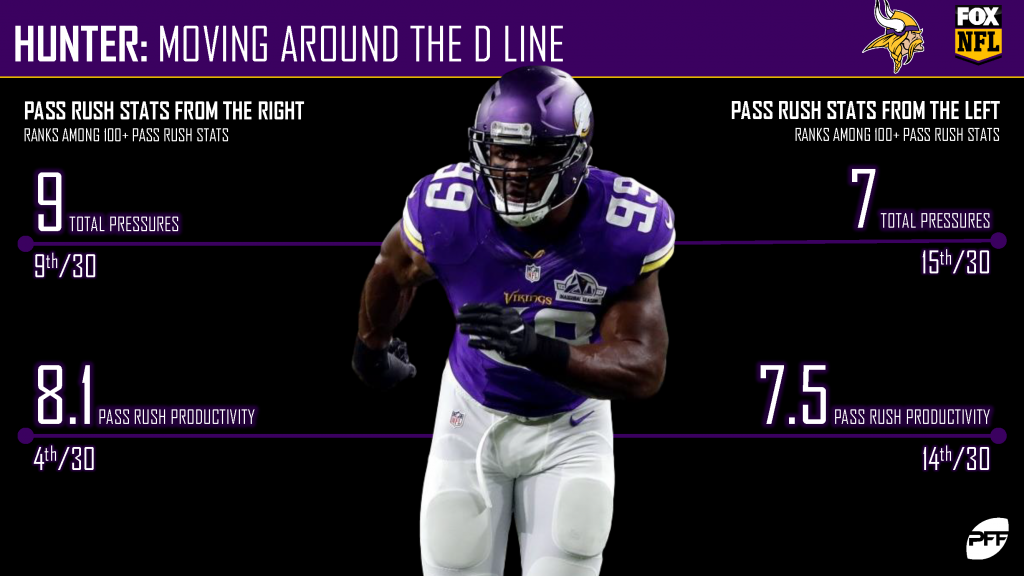 The starting outside cornerbacks for the Vikings have struggled mightily so far in 2018. Through four games, Trae Waynes has been a liability in coverage, allowing an almost perfect passer rating of 157.6 when targeted, third-worst among cornerbacks. More shockingly, the reliable Xavier Rhodes has also had his issues in coverage. When targeted, Rhodes is allowing a rating of 86.2, 35th at the position. 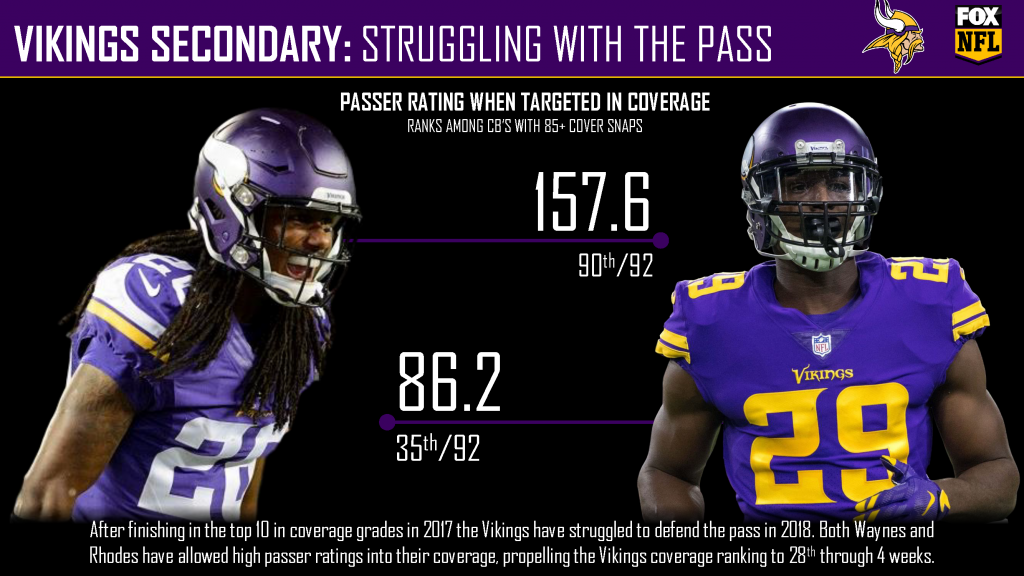 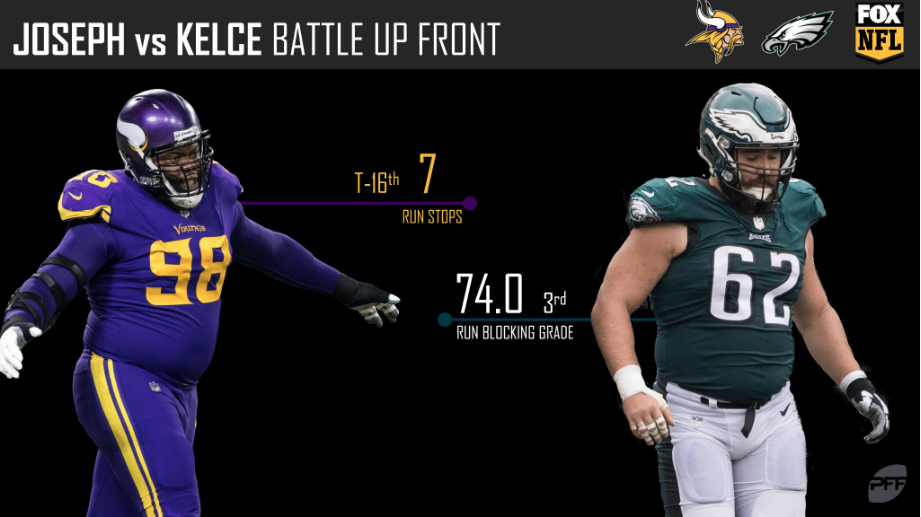 PFF Greenline has projections for the spread, moneyline and over/under of the Eagles’ matchup with the Vikings. Get its picks here.