Week 10 of the 2018 NFL season produced another slate of thrilling matchups, which included three big upsets. As we've seen over the first half of the season; one play, one big-time throw or one strong run in an opportune, high leverage situation often makes the difference between a win and a loss in today’s NFL, so let’s highlight some of the players on the offensive side of the ball who stood out and made a difference in Week 10. 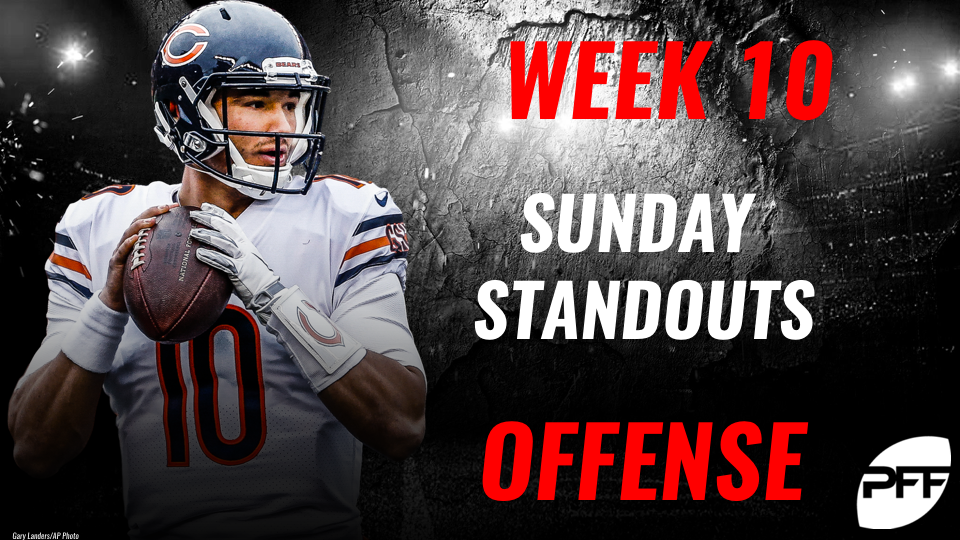 Brees continues to pick apart opposing defenses and make appearances in this article on Monday mornings. Against the Cincinnati Bengals, Brees only had three incompletions on 25 attempts. One of those incompletions was dropped and another was thrown away, which gave Brees a league-high adjusted completion percentage of 95.8%. He was also one of four quarterbacks in Week 10 to average over ten passing yards per attempt.

No quarterback was hurt more by drops this week than Luck, as Colts’ receivers combined for three drops in the game. Despite that, Luck had a very effective day against a struggling Jacksonville Jaguars’ defense. Prior to this week, only 8.8% of Luck’s passes traveled 20 or more yards downfield, but it was a different story Sunday. Luck went 4-for-4 on such deep attempts for 150 yards and a touchdown.

Key signature stat: Posted a passer rating of 158.3 on throws under pressure

Trubiksy was another beneficiary of the deep ball this week. On deep pass attempts, Trubisky completed four passes on a league-high eight attempts for 128 yards and two touchdowns. He also put together a strong showing under pressure with a perfect passer rating of 158.3 on his six pass attempts when the pass rush got home.

The Saints offense did whatever it wanted to do on Sunday, and Ingram was no exception to that. He forced five missed tackles on 16 touches and averaged 4.92 rushing yards after contact per attempt. Ingram contributed as a receiver, as well, with 58 receiving yards on just 12 routes.

When the Titans drafted Davis with the fifth overall pick in the 2017 NFL Draft, this performance is what they envisioned. He brought in all seven of his catchable targets for 125 yards and a touchdown. He also did his fair share of damage downfield, with three receptions and 67 yards of his total production coming on targets of 20 or more yards downfield.

Robinson put the groin injury that has been hampering him the last few weeks in the rearview mirror with a dominant performance against a beat up Detroit Lions secondary. Along with teammate Anthony Miller, Robinson was one of only two wide receivers this week to pick up over 90 receiving yards from the slot. In total, the passer rating when targeting him was a near-perfect 156.3.

Hill, on the other hand, did generate a perfect passer rating when he was targeted by Patrick Mahomes on Sunday. He was targeted nine times and caught all seven of his catchable targets for 117 yards and two touchdowns. It comes as no surprise that a sizeable portion of his production came via the deep ball, as he logged two deep receptions for 75 yards and a touchdown on the first drive of the game.

Jones hasn’t exactly had the best situation around him to succeed to start his career, but he also hasn’t performed to the level that the Bills would have expected. Sunday’s performance may be one that he can build off though, as it was the best of his career to date. Jones caught all eight catchable passes that were thrown his way and averaged 4.65 yards per route run.

Smith was able to shut down the Philadelphia Eagles’ pass rush with no hurries, hits or sacks allowed on 42 pass-blocking snaps. Smith is one of only three tackles this season to record over 300 pass-blocking snaps and not be responsible for a single sack. He also had a strong game clearing the way in a Cowboys’ rushing attack that went for 168 yards.

Another critical component in that Cowboys rushing attack was their all-pro guard Zack Martin. Martin made his most significant impact as a run blocker, but his pass blocking wasn’t anything to look over, either. He didn’t quite maintain a clean sheet like his teammate Smith, but he allowed just one quarterback hit on 32 pass-blocking snaps.