We’ve reached the stretch run of the NFL season. Let’s take a look at the biggest strength and weakness for each team in contention that could impact their playoff livelihood. 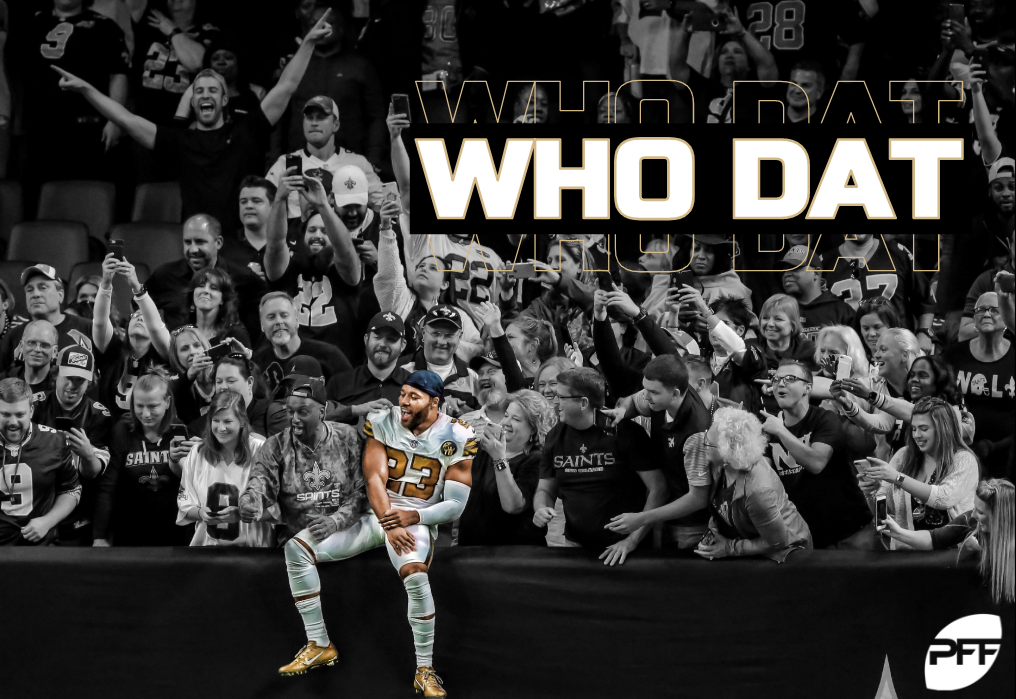 Strength: Drew Brees and his 95.6 overall grade looks borderline unstoppable at the moment.

Weakness: The next highest graded cornerback on the Saints roster after Marshon Lattimore is Eli Apple with a 53.1 overall grade.

Strength: Pretty much everything works for them offensively, in large part because of their dominant line. They rank fourth overall in pass blocking and first in run blocking.

Weakness: Have you seen the state of their secondary? Even supposed number one corner Marcus Peters has given up 613 yards – the fourth-most in the NFL.

Strength: Khalil Mack has to be accounted for by opposing offenses on every play, and their secondary is too talented in zone coverage to attack without five men out in a route.

Strength: Outside of the Saints game, this has been one of the stingiest secondaries in the NFL. They’ve allowed a passer rating of 80.1 on throws targeted 10-plus yards down the field, the third-best in the NFL.

Weakness: Alex Smith is done for the season, and Colt McCoy had a 61.5 overall grade on 160 dropbacks in his last action back in 2014.

Strength: They have so few weaknesses on defenses for opposing offenses to exploit and have come on strong of late. Only one defensive starter has a grade below 65.0.

Weakness: The Vikings' offensive line is a double entendre at this point. Their 154 pressures allowed are 17 more than any other line in the NFL.

Strength: The Panthers employ one of the most creative and effective running games in the NFL, as they're averaging the third-highest EPA per run in 2018

Weakness: Carolina has struggled to consistently impact opposing quarterbacks with their front four. As a team, they rank 23rd in pass-rushing grade.

Strength: The Seahawks' run game has brought back the option in a big way this season. Their 108 option runs are the most in the NFL, and they’re averaging 5.2 yards per carry on those plays.

Weakness: Seattle’s pass-rush at the moment comes and goes with Frank Clark. He has 38 pressures this season with the next best being Jarran Reed with 22.

Strength: This defense is chocked full of blue-chip talent. Byron Jones, Leighton Vander Esch and Demarcus Lawrence all have grades of 80.0-plus on the season.

Weakness: I’m surprised Skip Bayless hasn’t nicknamed him Sak Prescott yet the way the Cowboys quarterback has been taking bad sacks. We’ve charged him with a ridiculous 12 already this season.

Strength: Their strength is quite obviously Aaron… Jones. Believe it or not, the Packers lead the NFL in EPA per run, and Jones has the third-highest rushing grade among all running backs.

Weakness: Clay Matthews and Nick Perry have been comically bad rushing the passer this season. They’ve combined for a total of 30 pressures.

Strength: This isn’t too far off from the dominant offense we saw a season ago. The talent is still there although their red-zone touchdown rate has dropped from 65.5 percent last year to 54.3 percent this year.

Weakness: Injuries in the secondary look too much to overcome at this point. Safety Rodney McLeod and number one corner Ronald Darby are already on IR, and now their backups, Avonte Maddox and Sidney Jones, could miss time.

Strength: Even without Devonta Freeman, the bevy of weapons on offense is a matchup nightmare for defenses. Julio Jones currently ranks second in yards per route run among receivers while Calvin Ridley is 29th.

Weakness: The Falcons' edge rush has been non-existent this season. They rank 26th in terms of total pressures despite having the 11th-most pass attempts against. 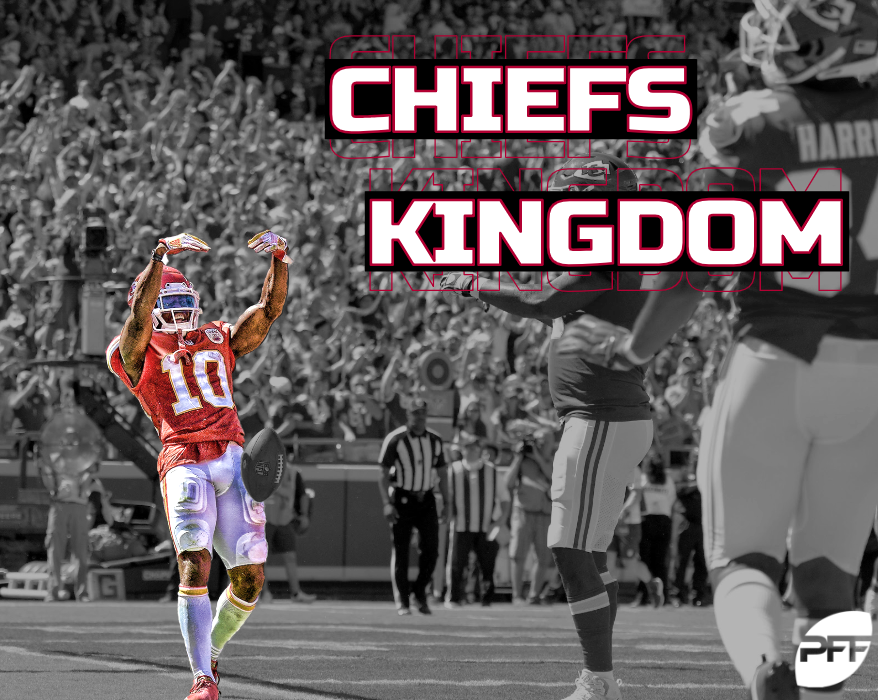 Strength: Have you seen this offense? That.

Weakness: Have you seen this defense? That.

Strength: Antonio Brown and JuJu Smith-Schuster are a handful for even the most talented secondaries. They both rank in the top-12 for receiving yards at the moment.

Weakness: The secondary has settled in considerably well since their early season hiccups, but linebackers Vince Williams and Jon Bostic are still far from consistent in coverage. Williams is currently the 12th lowest-graded linebacker in coverage.

Weakness: They’re going to struggle getting pressure against lines the likes of Kansas City's and Pittsburgh’s. They currently rank 23rd in team pass-rushing grade.

Strengths: Deshaun Watson has rare playmaking ability and even without Will Fuller, he has a stable of receivers that can rack up yards at will.

Weakness: The Texans own quite easily the worst tackle duo in the league. The trio of Julie’n Davenport, Martinas Rankin, and Kendall Lamm have combined to allow 90 pressures so far this season.

Strength: It’s a shame Hunter Henry won’t be returning this season, but even without him, this might be the most dangerous group of weapons in the league. Keenan Allen (9th), Tyrell Williams (37th), and Mike Williams (49th) are all top-50 graded receivers, while Melvin Gordon (2nd) and Austin Ekeler (1st) are the top-two graded backs at the moment.

Weakness: The offensive line is still a talented defensive line away from costing them the game. Left guard Dan Feeney’s 39.7 pass-blocking grade is the second-lowest of any guard.

Strength: Fully healthy, this is one of the best offensive lines in the NFL and ranked third in our most recent line rankings.

Weakness: Marcus Mariota has been a roller coaster this year, and his sack-taking is worrisome. He’s converting pressure to sacks 30.2 percent of the time, the highest in the NFL.

Strength: The Colts' offensive line has dominated of late, not allowing Andrew Luck to be sacked since Week 5.

Weakness: The talent in the secondary is still marginal at best. Pierre Desir (71.3) is the only corner on the roster with a coverage grade above 65.0.

Strength: This secondary is about as good as it gets in the NFL at the moment. Every starter has at least a 70.0 coverage grade.

Weakness: The Ravens completely flipped the script offensively with a run-heavy attack led by Lamar Jackson. The early returns were encouraging, but he’s still a rookie starting at quarterback.

Strength: I’ll be honest, there’s not much of a strength at the moment with an injury-addled receiving corps and defensive line. Geno Atkins is a very strong man, though, so we’ll go with him.

Weakness: The pass defense has completely gone in the tank and their linebackers have been the main culprit. The Bengals' backers have allowed 1,237 yards in their coverage this season, 172 more than any other team.