As Halloween passes, it’s time to look back at the best players from the month that was. October was the rise of bye weeks, and while that didn’t disqualify guys, we leaned more on total production rather than rate of play for our selections. Let’s see who came out on top in both the NFC and AFC for October. 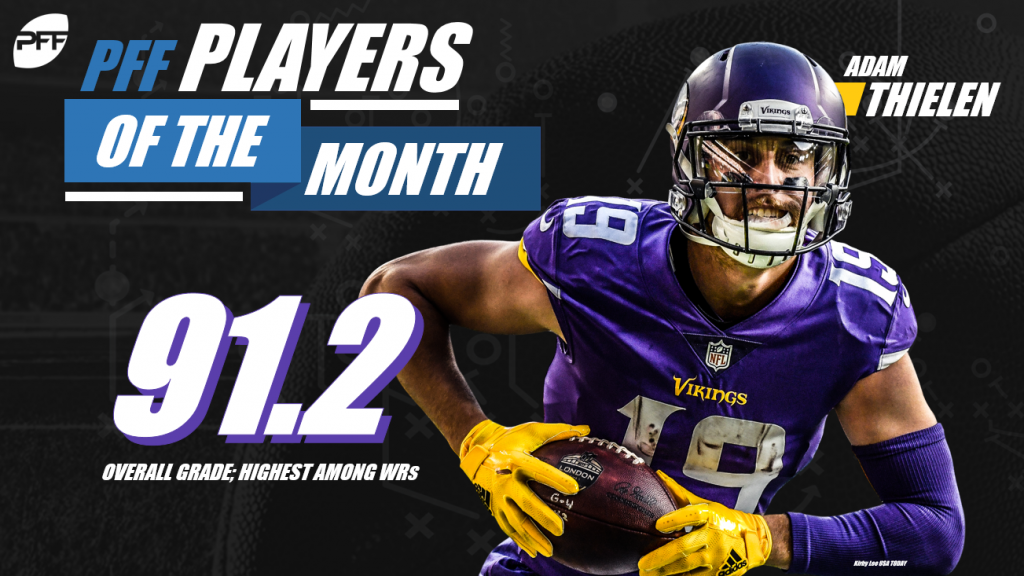 Thielen’s last month has been darn near as perfect as a receiver can play over that span. Everyone knows he’s gone over 100 yards in every game so far this season, but his target efficiency has been even better of late. He caught 34 of 40 targets in October – the highest catch rate of any WR with at least 15 targets – for 452 yards while not dropping a single pass. He was also second in yards per route run (2.79) and touchdowns (4) over that span, as well. Most importantly though, 24 of his catches went for first downs, the highest total in the league. 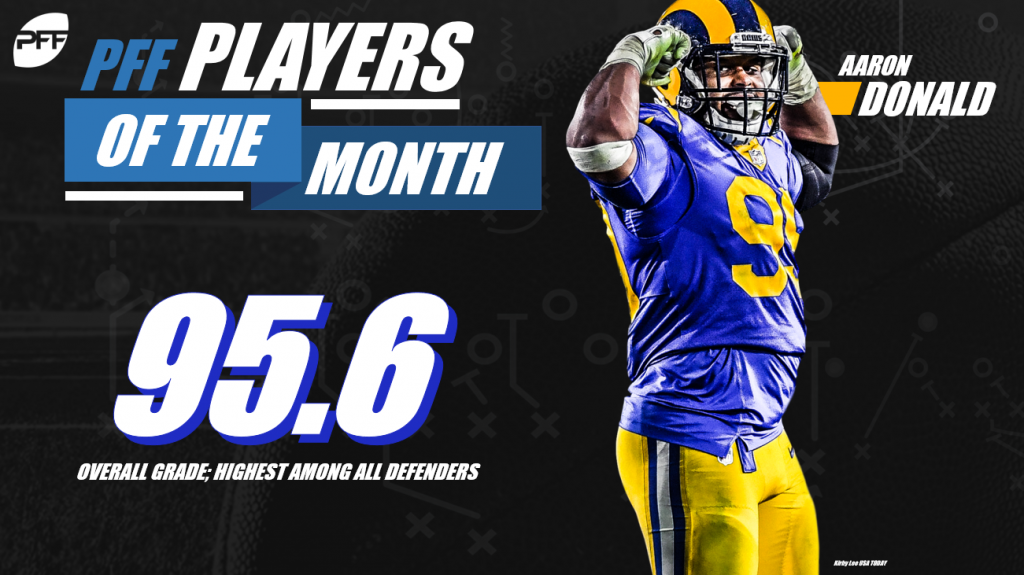 Maybe once Donald gets a bye week, someone else will have a chance to win player in the month in the NFC. Until then, we might as well rename this award after the Rams defensive tackle. For the month, he led the NFL in sacks (8), was eighth in hits (4)and fifth in hurries (14). There’s Aaron Donald and then there is every other defensive lineman in the league at the moment.

Anytime you can single-handedly end a game as a special teamer, you’ve done something fairly special. Wilson's strip and subsequent recovery this past week on Ty Montgomery’s kick return with under two minutes left sealed a Rams victory. Wilson, who plays on the Rams kick and punt coverage units, made two other tackles in October and didn’t miss any to earn him this award. 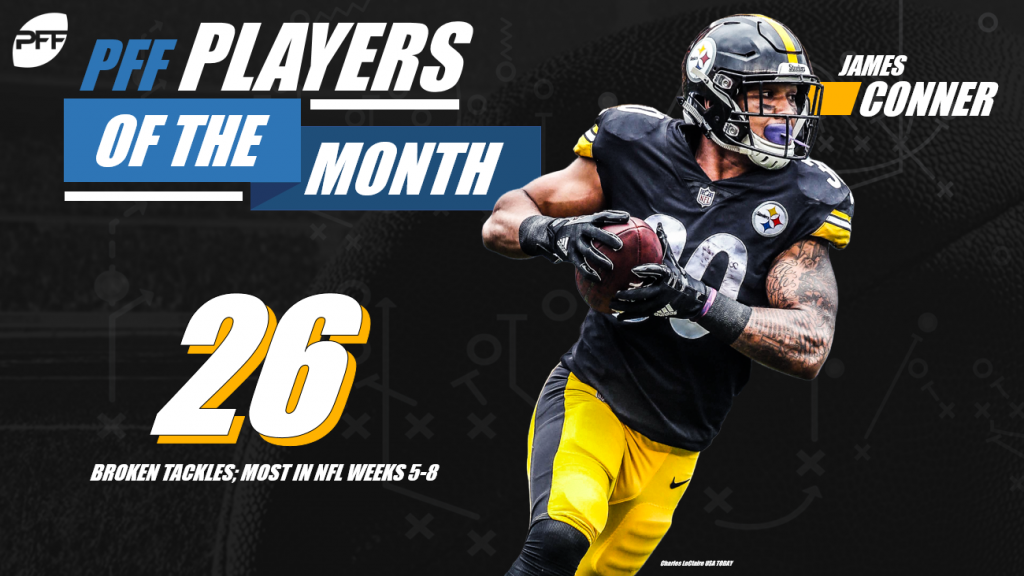 I know I said in the intro that we were using total production as a barometer and that the Steelers had a bye in Week 7, but the fact that he still made it should tell you how special Conner’s three games last month were. He still led the NFL in total broken tackles (26) despite playing one fewer game than most backs. The Steelers back averaged 3.61 yards after contact per attempt (fourth best in October) on 64 carries, scored six touchdowns (second), had 159 receiving yards (sixth) and an elusive rating of 121.9 (first). Le’Veon who? 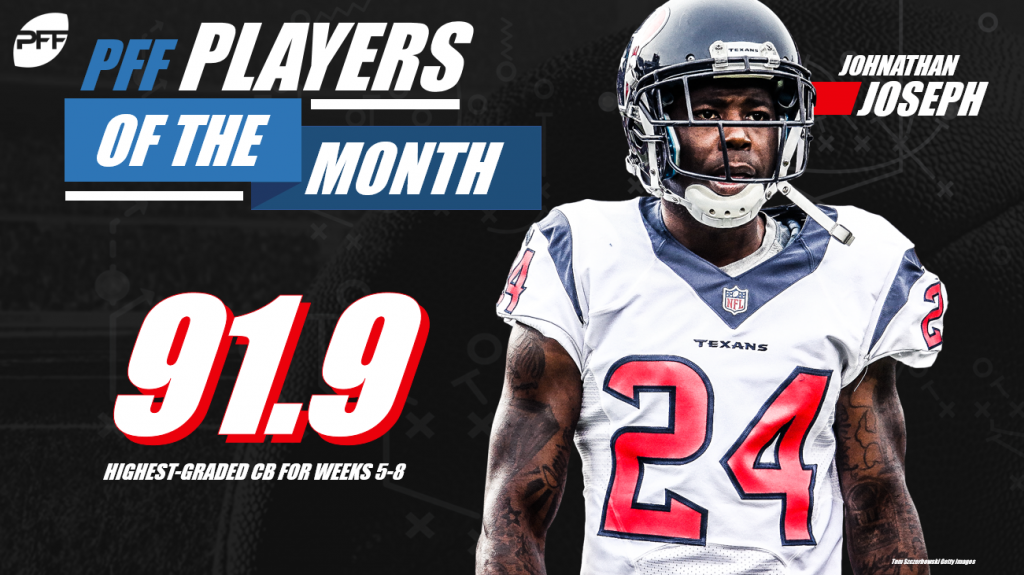 It was quite the month for Joseph before an ankle injury limited him to 11 snaps last Thursday night against Miami. He was targeted 27 times in October, yet allowed only 11 catches for 111 yards. What’s even crazier is that of those 11 catches, only three resulted in first downs. 165 other players allowed more first downs in their coverage than Joseph did this past month. He also broke up four passes and added five coverage stops for an all-around superb month.

What Hauschka lacked in volume, he made up for in efficiency. The Bills kicker only attempted seven field goals and two extra points in four games this past month, but the level of difficulty gives him the nod. Five of those seven field goals came from 40-plus yards out, including two from 50-plus. Hauschka nailed all of his kicks, including two in the swirling winds this past week on Monday night against the Patriots.

Tackles aren’t supposed to hit the ground running as quickly as McGlinchey has in San Francisco. After a rocky first few weeks in pass-pro exacerbated by a Week 1 flip-flop from right tackle to right guard, McGlinchey was rock solid in October. He only allowed seven pressures all month long, highlighted by a zero-pressure performance against Green Bay. Grade-wise, McGlinchey’s 87.5 run-blocking score over the last four weeks was the second-highest of any offensive lineman in the NFL.

Just recently named to PFF’s Midseason All-Pro team, Bates has been a stud in coverage. He was targeted 11 times last month and had almost as many picks (2) as he allowed catches (3). That was good enough for a passer rating of 0.0. Bates’ four coverage stops over that span were also sixth-best of any safety in the league.