New Cowboys DI Trysten Hill is a perfect scheme fit in Dallas, and he should see the field immediately

The Dallas Cowboys shocked fans everywhere when they eschewed a deep secondary and wide receiver class with their first pick in the draft and made UCF defensive tackle Trysten Hill the 58th overall selection. With Nasir Adderley, Taylor Rapp, and Juan Thornhill all still on the board at safety and Parris Campbell, Andy Isabella, Diontae Johnson, Terry McLaurin, and D.K. Metcalf all still available at wideout, we here at PFF were genuinely surprised as well. We loved the value of their other day-two pick in Penn State guard Connor McGovern, but this draft will be remembered by fans for the uber-athletic defensive tackle that was taken in Round 2. 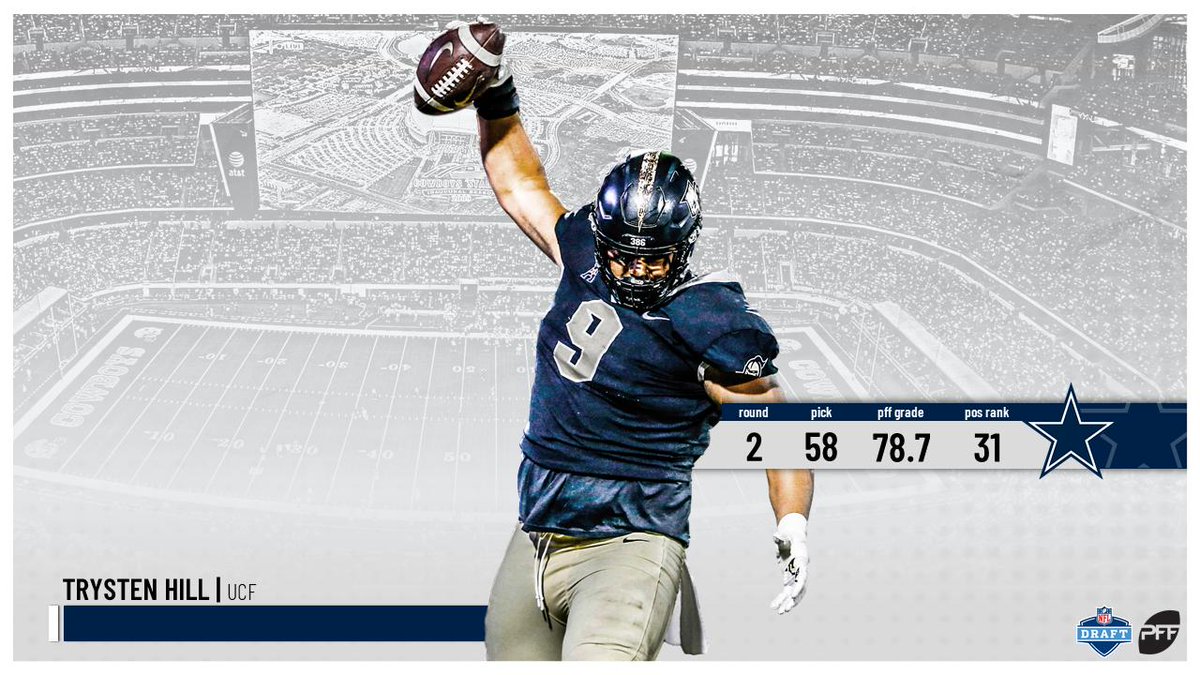 The very first thing that jumps out when looking at Hill’s profile is simply his playing time. In his three years at UCF, Hill never even played 50% of their defensive snaps in a season despite being healthy. His 465 snaps last season were the fourth-most of any UCF defensive lineman even though he was far and away their highest-graded player up front. Falling out of favor with the coaching staff and only starting once this past season is obviously a red flag, but we here at PFF focus on what a player does on the field and trust the Cowboys' coaching staff to have vetted the off-field issues.

On the field, Hill was the definition of a disruptor. The stat sheet notes only one sack a season ago, but Hill’s impact was far more than that. His 11.6% pressure rate was the 11th-best figure among defensive tackles in the FBS last season. He ranked higher than guys like Ed Oliver, Jeffery Simmons, and Dre’Mont Jones in that statistic last season. This was not an unproductive player, but rather one who didn’t see the field enough to put up great raw stats.

There’s good reason to think that Hill’s production will translate nicely from college to the NFL. He had one of the most impressive combines of any defensive tackle prospect this season. Hill notched an absurd 35” vertical to go along with a 5.04 40-yard dash and 28 bench reps. You see that again and again on tape with his get-off at the snap.

Cowboys defensive coordinator Rod Marinelli is known for putting athletic defensive linemen in a position to succeed. One trait alone stands out above the rest for what he desires from defensive linemen: penetration. Hill won’t fit into every defense, but in Dallas, he’s the prototype. Marinelli allows his defensive linemen carte blanche to attack upfield and make plays. When Hill had those opportunities at UCF, you saw that natural talent take over.

While they may have passed on more glaring needs, the Cowboys got a perfect scheme fit and a player who will see the field immediately. With their track record of developing defensive linemen, don’t be surprised if fans look back on the 2019 draft in a few years with no regrets on taking Hill.