Most improved NFL team in each division for 2018

With the exception of a handful of quality free agents still left on the market, the offseason craziness has come to a close. That means it’s time to examine which teams capitalized over the last couple months and set their rosters up for success heading into 2018. These are the teams in each division who improved the most with their free agent and draft selections this offseason. 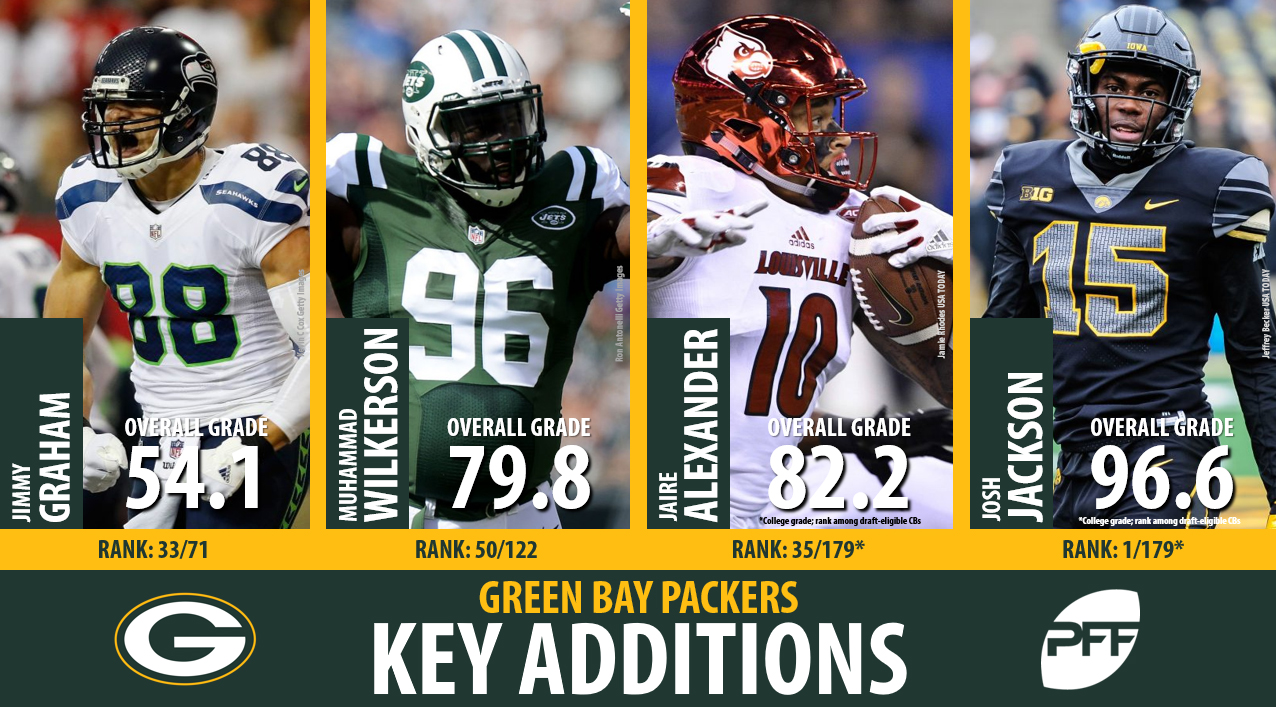 Winning the offseason isn’t solely about addressing need, but when they are as glaring as the Packers holes were and they’re addressed, it counts for more points. The Packers could have legitimately completely revamped their cornerback room with first- and second-round picks Jaire Alexander and Josh Jackson – and in turn completely revamped their defense. They finished 30th in team coverage grade last year after finishing dead last in 2016.

Add to that the additions of Jimmy Graham and Muhammad Wilkerson in free agency and the Packers are back into Super Bowl contention. Last season the Packers tight ends averaged only 1.05 yards per route – the 26th-best figure in the league. Graham’s career average is 1.79. Wilkerson all but disappeared after he signed a big contract, but on only a one-year prove-it deal now we could see the player that had four straight seasons grading over 80.0 overall from 2012-2015.

The Giants are almost the de facto winners in the NFC East where no one survived the offseason unscathed. While the Giants suffered some serious setbacks themselves defensively, it’s difficult to see their offense not improving by leaps and bounds in 2018. The biggest additions obviously come along the offensive line where the Giants were 29th in pass-blocking and 21st in run-blocking a season ago. Nate Solder is quite the upgrade over Ereck Flowers and his 51.5 overall grade at left tackle while Will Hernandez – who had a first-round grade from us at PFF – should step in and be better than D.J. Fluker and his 42.3 overall grade from a season ago.

Then there is the obvious upgrade that is No. 2 overall pick Saquon Barkley. His 1.90 yards per route last year at Penn State led all college running backs while the Giants 1.07 yards per route from their runners a season ago was 26th in the NFL. 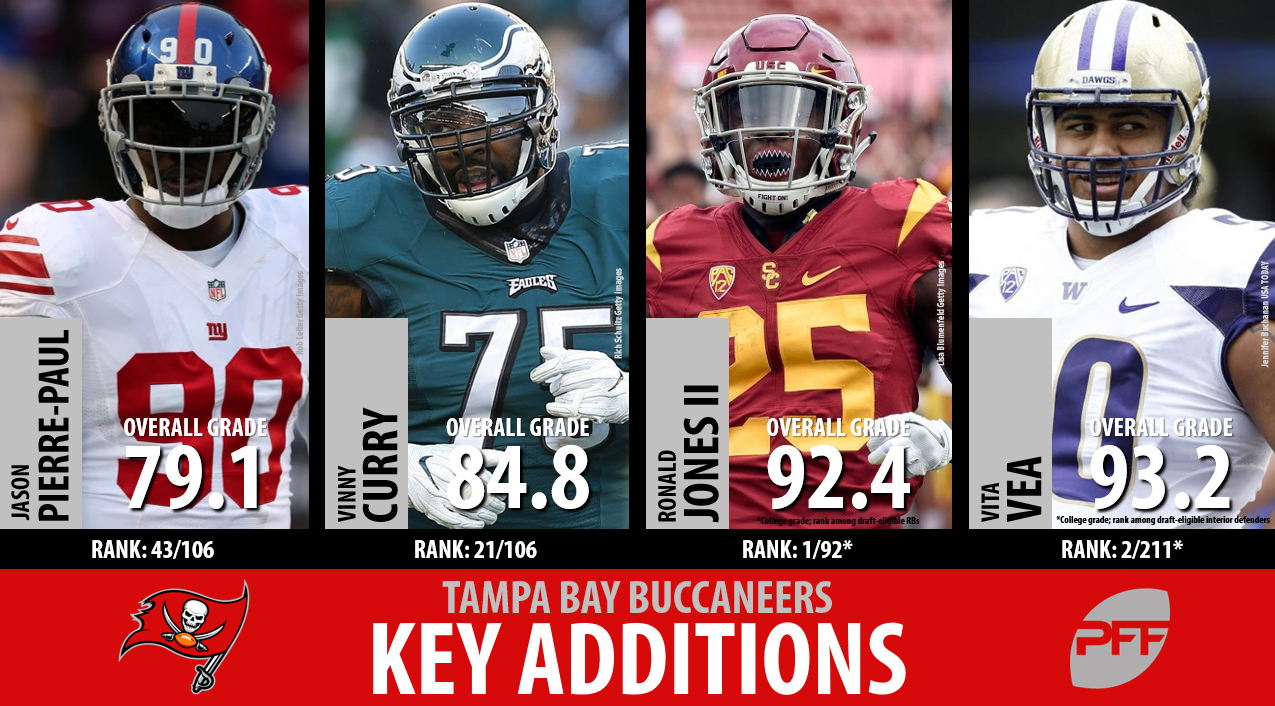 It’s no secret where the Bucs needed to improve and their offseason moves showed just how big of an issue they thought it was. The Bucs defensive line was a nightmare in 2017 outside of Gerald McCoy. Tampa Bay was 29th in pressure rate this past season (30.9 percent of dropbacks) and outside of Robert Ayers and McCoy, they didn’t have a single lineman with a grade above 70.0. Both Jason Pierre-Paul (51) and Vinny Curry (47) had more pressures than anyone on the Bucs roster last season.

For all the money Trumaine Johnson has and will be paid, he never had a season graded above 81.0 in his entire career. You’d have to go back to 2015 to find the last time either Peters or Talib graded below 81.0. To say they upgraded their cornerback room is an understatement.

The Rams‘ loss of Sammy Watkins looked as if it could be critical as his deep threat ability keyed a lot of what the Rams did underneath in 2017. That loss was all but completely mitigated when they traded for Brandin Cooks – arguably the league’s most productive deep receiver last year. Cooks' 608 yards on deep passes were more than Watkins had total last year. 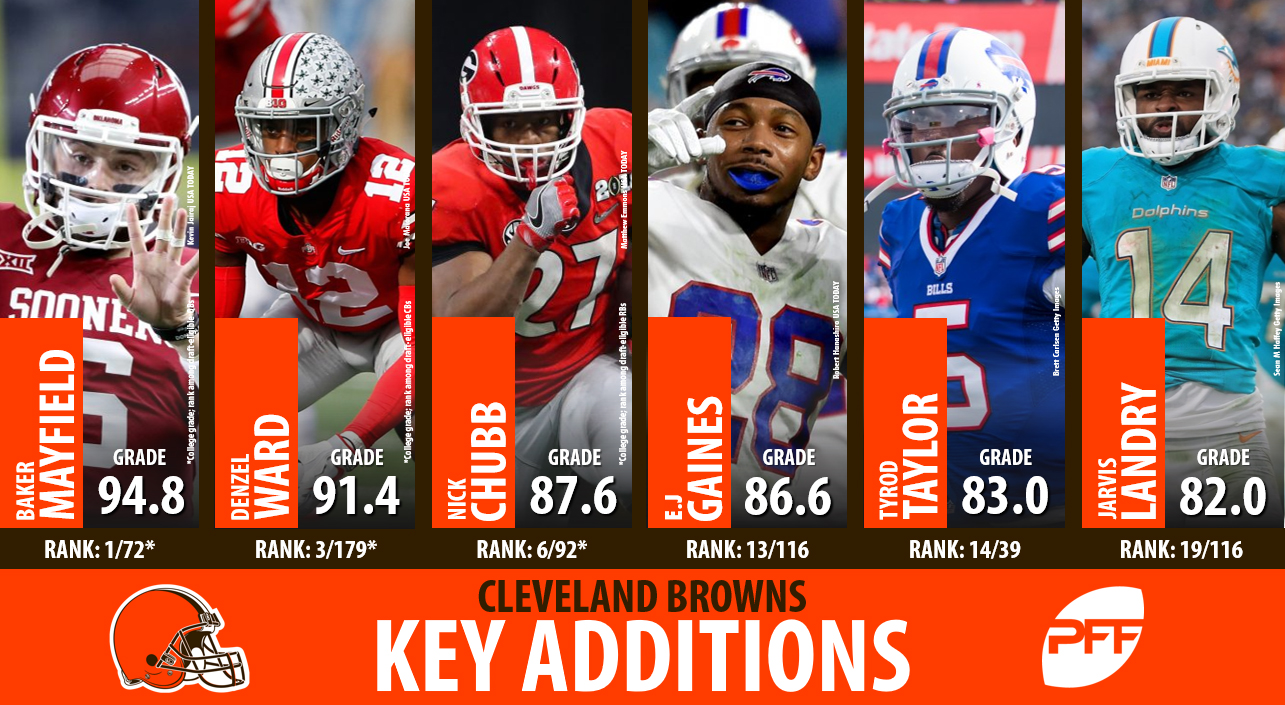 There’s no replacing future Hall of Famer Joe Thomas on the blind side and the peace of mind he afforded the smattering of quarterbacks he blocked for over his career. When you look at the sheer multitude of talent they brought in over the course of the offseason, it starts to look far less consequential.

The Browns brought in four different players who had grade of 80.0-plus in the NFL a season ago as well as four of the top 35 picks in the 2018 NFL Draft. The Browns arguably had a greater influx of talent than any team in the NFL this offseason. The cherry on the top is the addition of the No. 1 player on PFF’s big board – and owner of the two highest graded seasons we’ve ever given to a college quarterback – Baker Mayfield.

This was a tight one between the Jets and the Dolphins, but what New York did at the quarterback position was the deciding factor here. Teddy Bridgewater is no sure thing to recover from a knee injury and Sam Darnold has plenty of question marks coming out of USC, but they increased their chances of finding a franchise-type guy by taking multiple swings at the position.

From there, the Jets took a handful of chances on guys with injury red flags who could pay off big dividends if they can stay healthy. Henry Anderson, Terrelle Pryor, Thomas Rawls and Spencer Long have all had quality seasons in the past, but have battled injury over the past year. 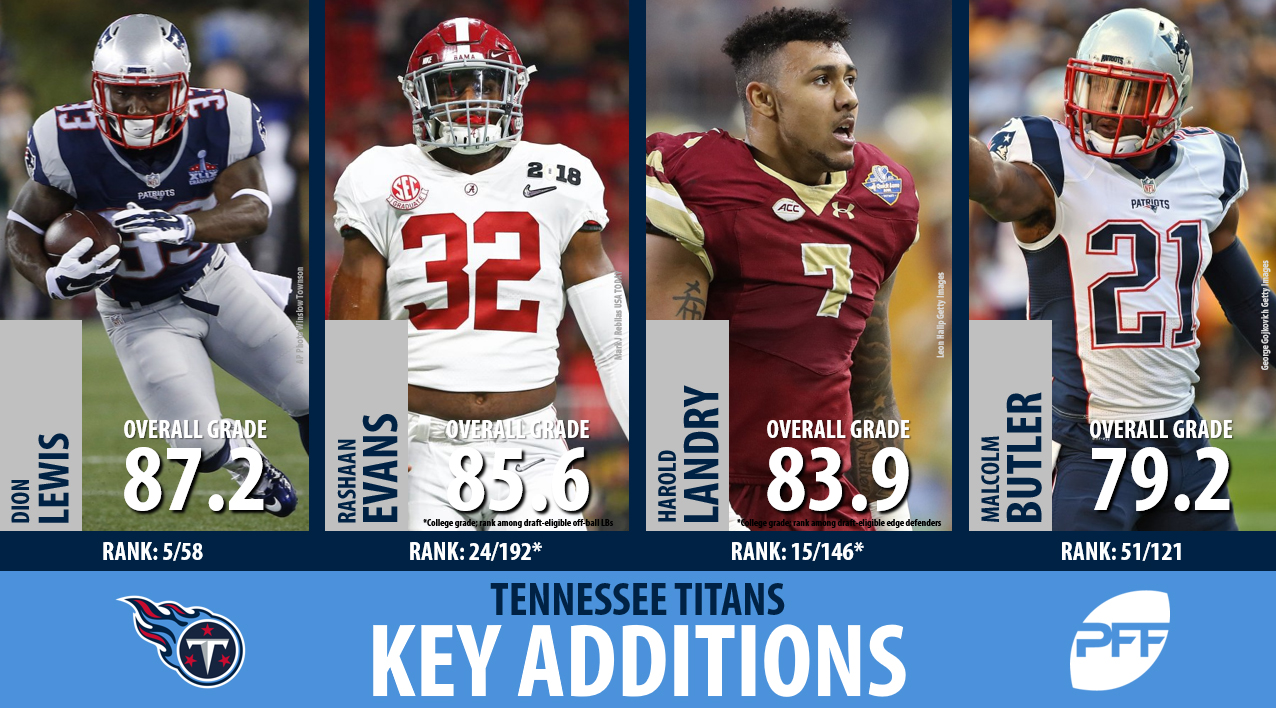 Some big names left Nashville this offseason, but their on-field production wasn’t close to their reputation at this point in their careers. Eric Decker and DeMarco Murray managed grades of 72.5 and 71.2 this past season respectively. A fully healthy Corey Davis and the addition of Dion Lewis (89.4 overall grade) should help mitigate such losses.

The big addition for the Titans here is cornerback Butler, who despite getting benched in the Super Bowl, is still an incredibly talented player. His 81.0 overall grade this past season was actually his lowest as a starter in his career. The Titans nickel corner was an issue a season ago, and we’ve seen in our data how much of an impact that can have on a defense. Now the Titans go three deep and added two serious pass-rush threats in Rashaan Evans and Harold Landry to aid the pass defense.

This one is as much about the lack of losses as it is the additions. The Broncos and Chiefs lost key members of their secondary in Aqib Talib and Marcus Peters, respectively, while the Raiders largely kicked the can down the road with non-descript free agent signings and draft picks. The Chargers brought in two guys in Pouncey and James who will undoubtedly make an impact Year 1 and they could even still feasibly bring back their highest graded loss this offseason in still unsigned Tre Boston (although unlikely).

Defensively, James and Nwosu only help to solidify one of the league’s best defenses a season ago. James was PFF’s highest graded college safety as both a freshman and junior and he goes to a Chargers defense that already had the second-highest coverage grade in 2017.